I've been painting rather less of late, as I’ve mentioned before I know. I have though finished two more bases of figures for our Italian Wars project, another base of Gendarmes and a Champion base. The figures were part of the package of free stuff Tim Hall so kindly sent me. I soaked them for several days in a bath of Detol to remove the varnish and paint, then resprayed them with white Double Acrylic undercoat which I buy from our local Home & Motor Store. The flags are, as ever on this project, from Pete’s Flags and the bases from Warbases. The figures themselves are from Foundry, Essex and, I think, Hinchliffe but the codes on the bases were not clear to read so I may be wrong on the latter two. Anyway, enough waffle, here they are ~ 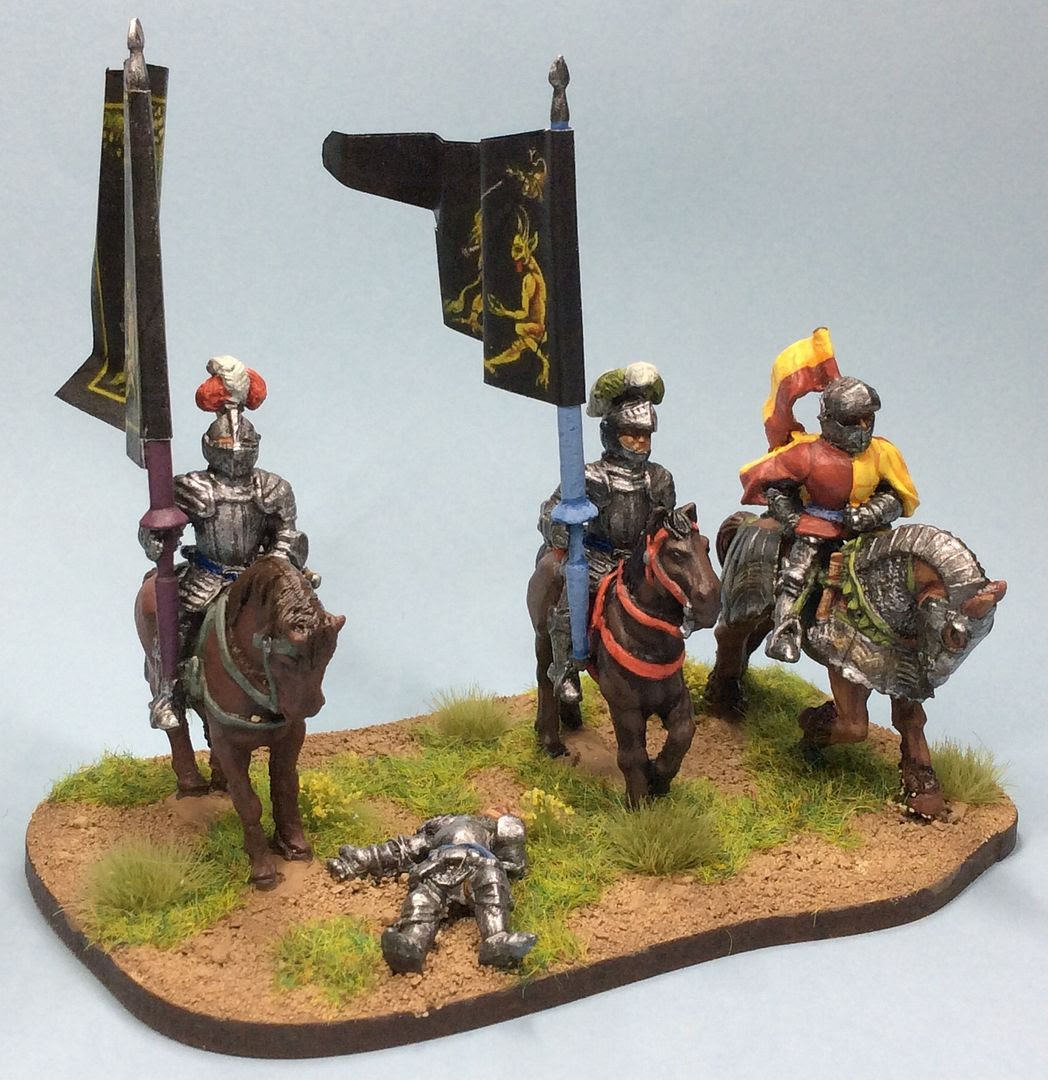 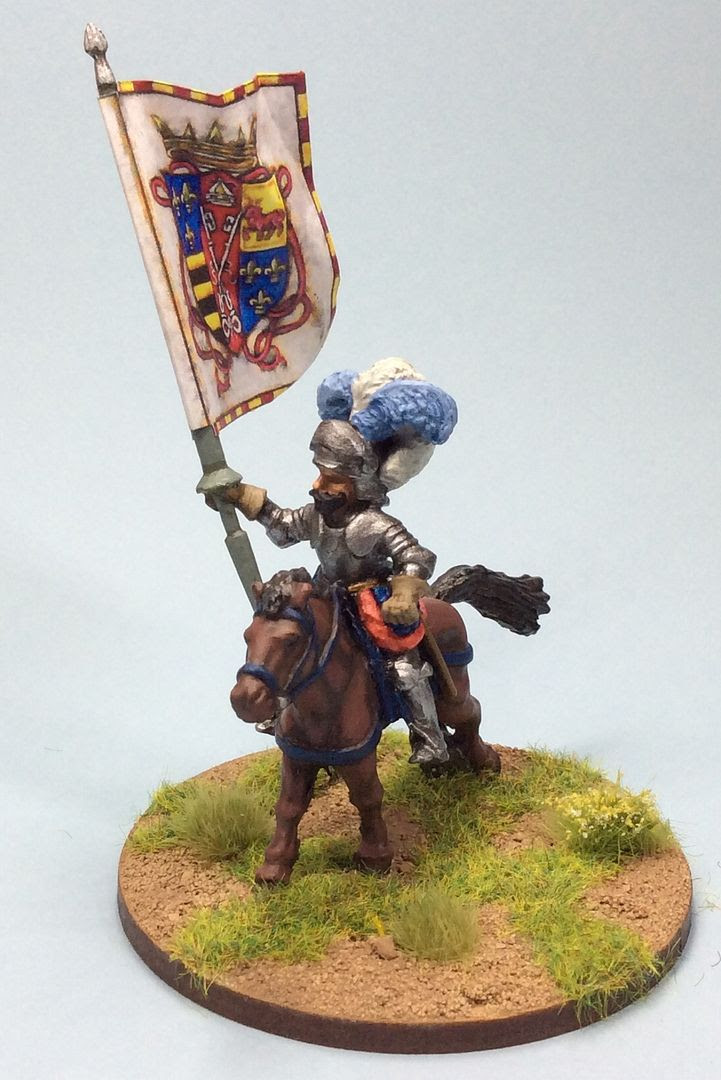 I think the base of Gendarmes turned out better than I hoped once the figures were all painted up. Originally the Essex Champion was also on their base, but it just didn’t gel then as a unit, hence the decision to make him my army’s Champion. I’ve started on a base of Landsknecht pike now, with more of Tim’s generous free figures bulking it out. I hope to complete it before next Friday, but it will be close I think. I’ve finished four so far and have another sixteen to go!
Posted by David at 05:29 12 comments:

The Battle of El Tubh

As I mentioned in the previous blog post, this week’s Monday game with Phil was again moved to a Tuesday due to my hospital appointment. The calm before the storm ~

For a change, I took command of the Imperial Force, landing from the  transport  vessels and supporting gunboats and attempting to defeat the forces of the Mahdi who were besieging the Egyptian garrison of El Tubh. The series of annotated pictures which follow try to tell the unfolding story of the battle, fought out over eight turns ~

AfterAA
After eight turns Phil called a halt, admitting he could no longer stop the Imperial forces relieving the garrison at El Tubh. Twice the Nile Arabs had breached the walls and twice they had been driven out by Egyptian Irregulars, supported by the artillery despite its heavy losses. I was pleased to accept the victory, having been sure in Turn Seven that I would probably loose. Once again the Loyal Tandooris distinguished themselves in action, but the least said about the South Staffords and their Colonel the better...
Next up here in GHQ a F&IW game with Jon next Wednesday, using Sharp Practice 2, the last game for some time as you will no doubt have worked out due to the hip replacement surgery on May 4th. I'm still painting Italian Wars figures though and hope to feature some completed bases later in the week. Pop back and check on them later.

Painting has rather slowed down of late here in GHQ, a combination of the warm spell of weather and my mind being on two weeks hence and the operation. I have however managed to finish two bases of Wargames Foundry gendarmes which I bought late last year on a visit to their Factory Shop. As ever with this project the flags are from the brilliant Pete’s Flags and the bases from the wonderful folk at Warbases. I’m a great fan of Foundry figures and down the years I’ve always been well looked after but I wish I’d checked the horse castings while I was there as they were covered in seriously thick flash, between the rear legs especially. But I managed, so no great issue. Here they are anyway, one base matt varnished due to a warm Tuesday and one base still waiting varnish as I’ve used it all up ~ 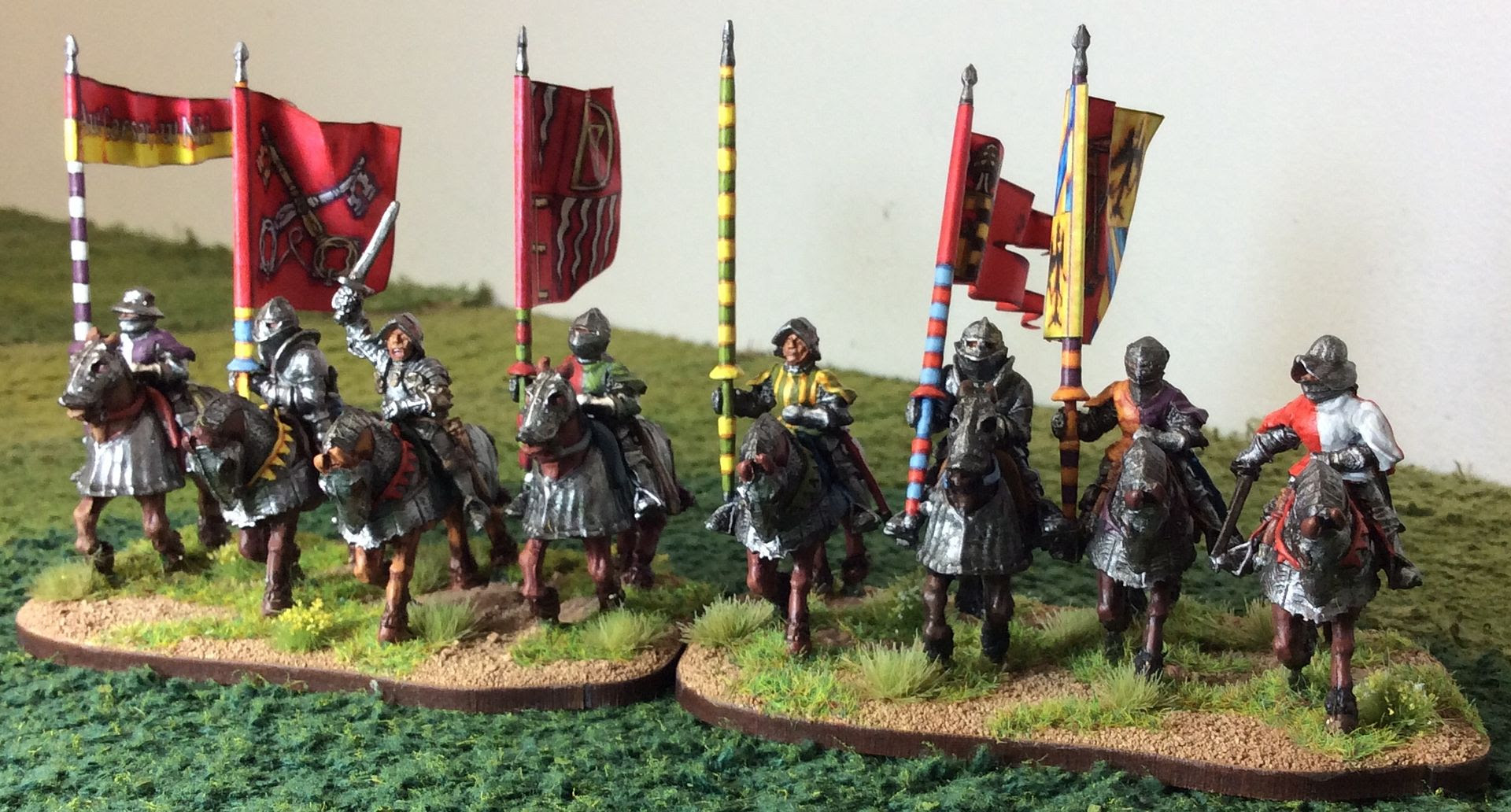 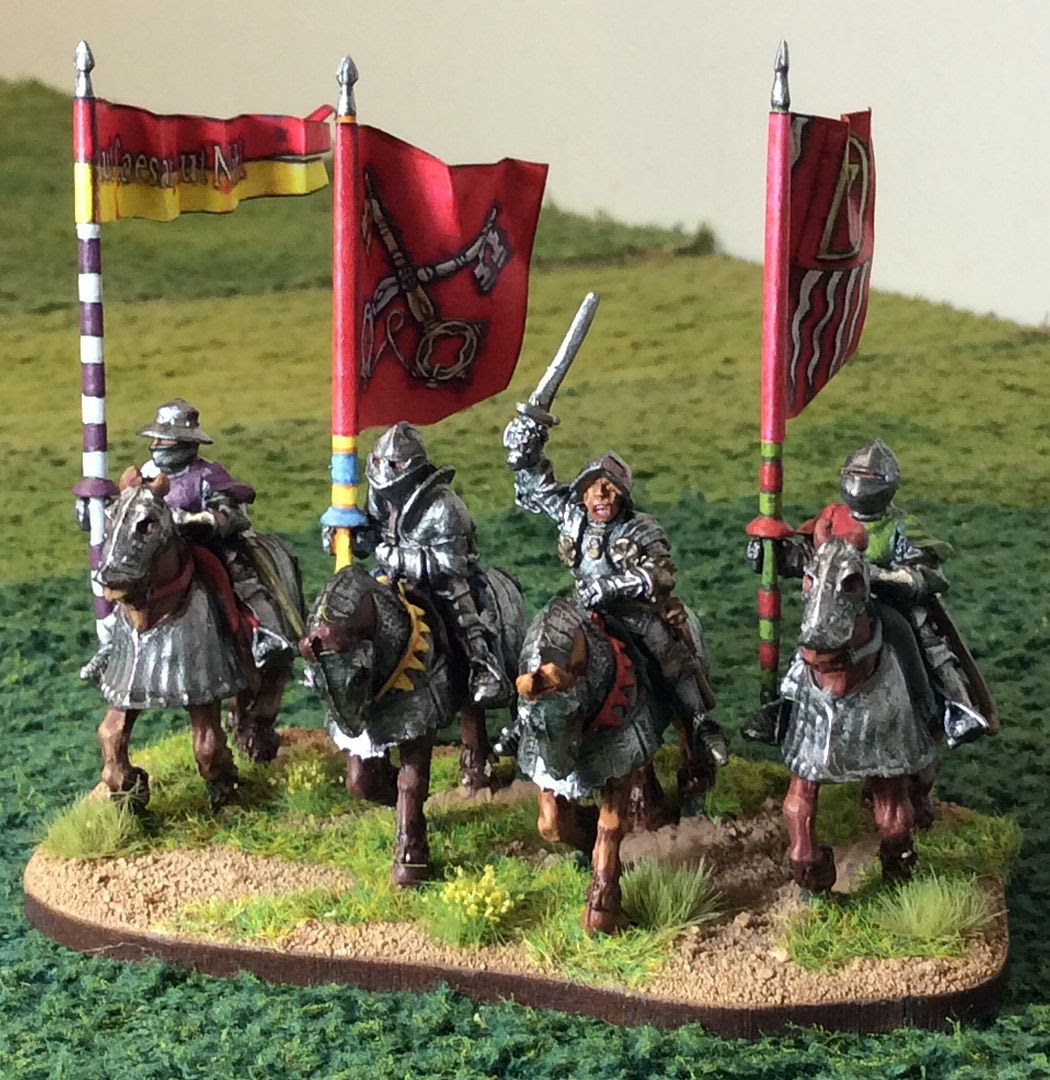 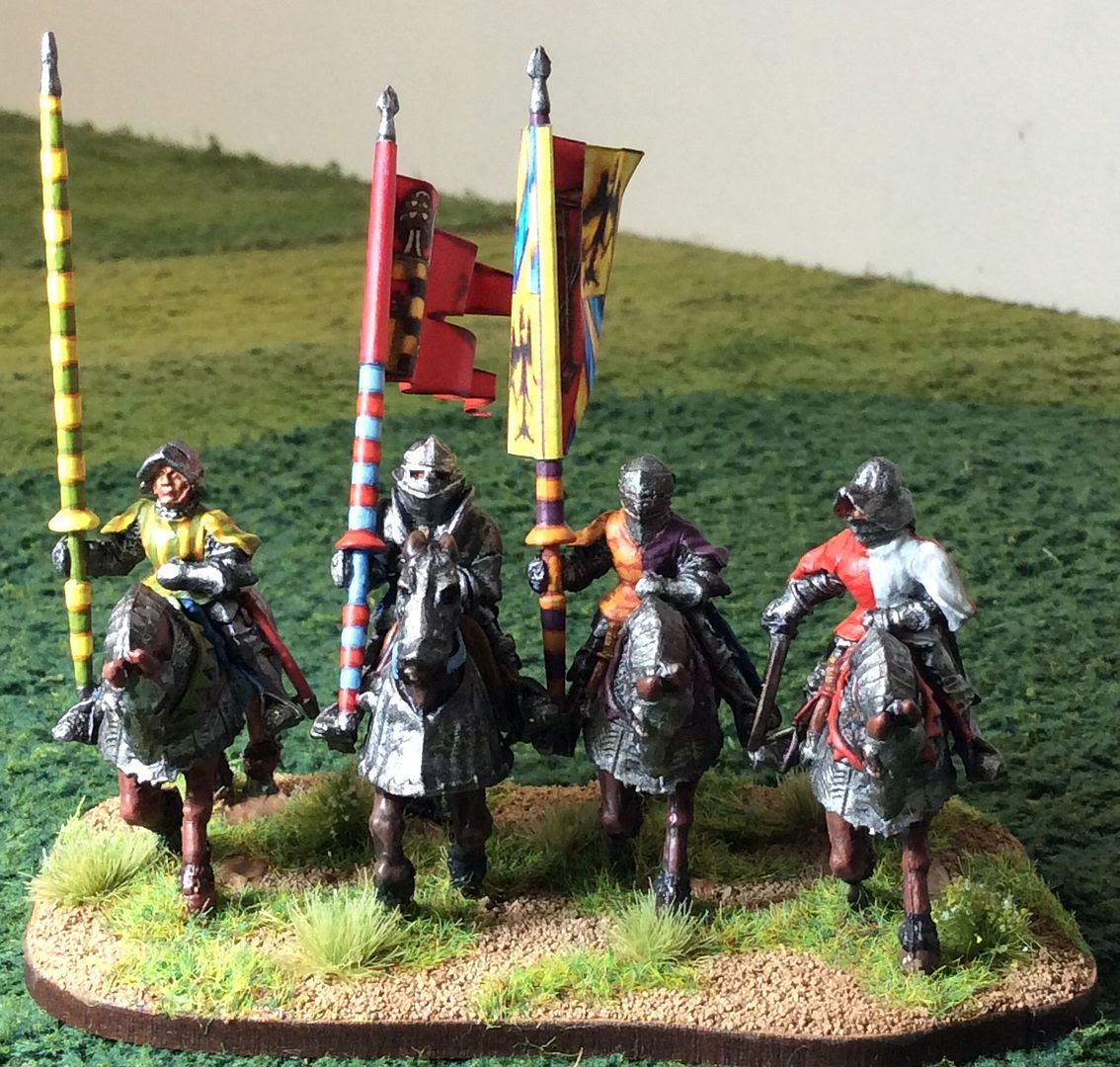 I’ve got all the basic colours on four more Gendarmes which I hope to finish in the next day or so. They were in the package of figures Tim Hall so kindly sent me recently and are a mixture of manufacturers, Foundry, Essex and Hinchliffe I think from the codes I can make out. It matters not a jot either way, they will soon be joining the ranks of Cesare Borgia’s army. In the meantime, next week’s Monday game will again be on Tuesday as I’ve a hospital appointment pre admission. I’ve set out the table this morning for a Sudan War game,using Black Powder rules, as is our wont of late, the Battle of El Tubh. Pop back later next week to see how it went!

“The British are coming...”

...albeit rather slowly! For our usual Monday game Phil and I met in GHQ on Tuesday morning. A new carpet being laid in the lounge on Monday meant GHQ was then doubling as a furniture store, again. I hope that I have finally regained it for gaming now, at least until the post hip replacement operation, now scheduled for May 4th. Anyway, on to the game. I chose an AWI game using Black Powder as the ruleset. As usual in these games Phil, in his persona as Lord Rawnsley, commanded the British while I took command of the American rebels; old ‘Independence or Death’ Bykleigh once more hoping against experience for a decisive victory! In the end we managed to play eight turns before we ran out of time. I hope the following annotated pictures will tell the unfolding story of the Battle at Hogg’s Crossing for any interested followers or visitors ~


As ever, Black Powder as a ruleset proved all we wanted from a game, delivering episodes of success and failure for both sides, aided by a number of Blunders on both of our parts. If we could have fitted in more Turns the Crown's forces may have rallied to the attack once more  the Americans may have won the day, it was difficult to say so a Draw pleased both of us on the day! Next up in GHQ will be a Sudan War game, again on a Tuesday!
Posted by David at 03:32 15 comments:

My latest base of figures comprises a unit of handgunners. The figures are by TAG and were, as I’ve banged on about before, a real joy to paint. I chose a colour scheme for the coats of Foundry Storm Green and Yellow, going straight from shade to light without the mid colour. I think it reflects the stark Mediterranean light but you may not agree ~ 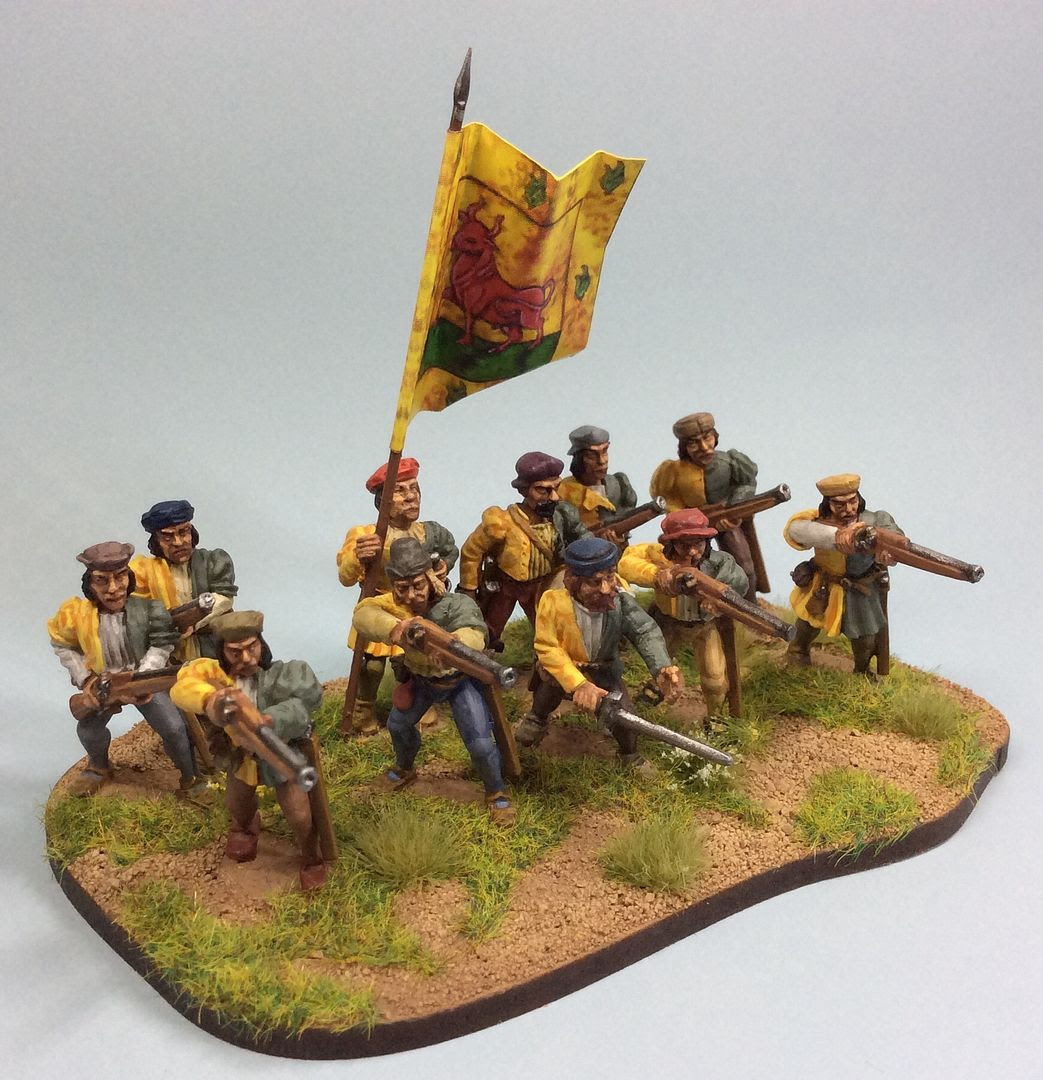 This is the last of my TAG units, for now anyway. I have now got two bases of Foundry Gendarmes, two bases of Warlord/ProGloria, Tiger Miniatures, Dixon Miniatures and Steel Fist Landsknecht pikes and a Landsknecht Command base of Warlord/ProGloria and Steel Fist figures and, as Phil would say, we are done!
I received my new admission date letter for my hip replacement operation on Saturday morning. I am going in now on May 4th - no Star Wars jokes please! I don’t think that will be enough time to paint all these, but I will give it my best shot! I hope that my friends will keep me in their thoughts come ‘The Day’, and if they are of the inclination towards prayer, to mention me kindly. Thanks.
Posted by David at 01:50 17 comments:

“The boys stood their ground,sir, indeed they did sir!”

For our monthly Wednesday night game in April Jon and I had agreed on an ACW game, using the Black Powder ruleset with the Glory Halelujah additions as we deemed appropriate. My figures are almost all Dixon Miniatures, still in my opinion the most characterful range for the period, though other ranges are of course available. The trees are from The Last Valley, whose products I highly recommend, while the fences Phil and I made back in the day! The Confederates, commanded by Jon, had the objective of seizing the bridge and turning the flank of my Union army which was camped along the river, somewhere in Virginia as they’d say. The Union begin with three small Brigades deployed defensively, one of Regulars classed as Large, but with not sufficient manpower to cover their front, with one more Brigade arriving in Turn 3. The Confederates begin with three large Brigades, each having one Large unit at least. The game ebbed and flowed, as all great games do, and so there are not as many pictures to tell the tale as I would have liked ~
As time ran out we decided on a winning draw for the Rebs who, despite driving back the Colored Troops defending the bridge, could not make the Union army quit its position. Their attack in the centre was driven off in the end while on their right it stalled completely against the Irish Brigade.
General Useless S Bykleigh was more than satisfied with the end result as at times it had been a desperate fight all along the Union front. Returning to an earlier theme, that of making use of spare figures, I’ve cobbled together a base of Halberdiers. The figures come from three manufacturers: TAG; Warlord/ProGloria; and Front Rank. I think that they work quite well together myself, although the Front Rank figures are noticeably more chunky than the others. Still, some folk are chunkier than others I’ve noticed. Judge for yourselves anyway, as here they are ~ 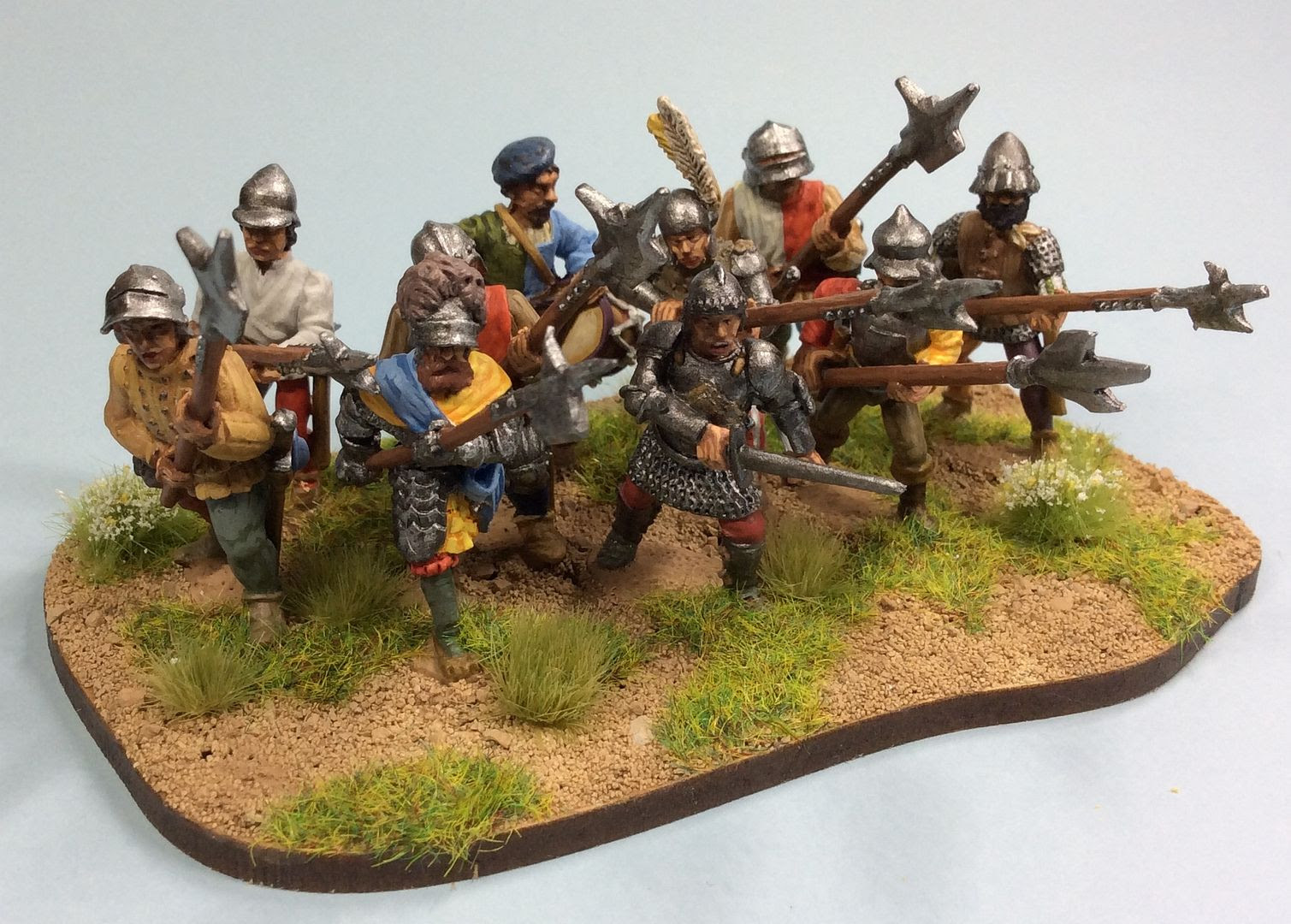 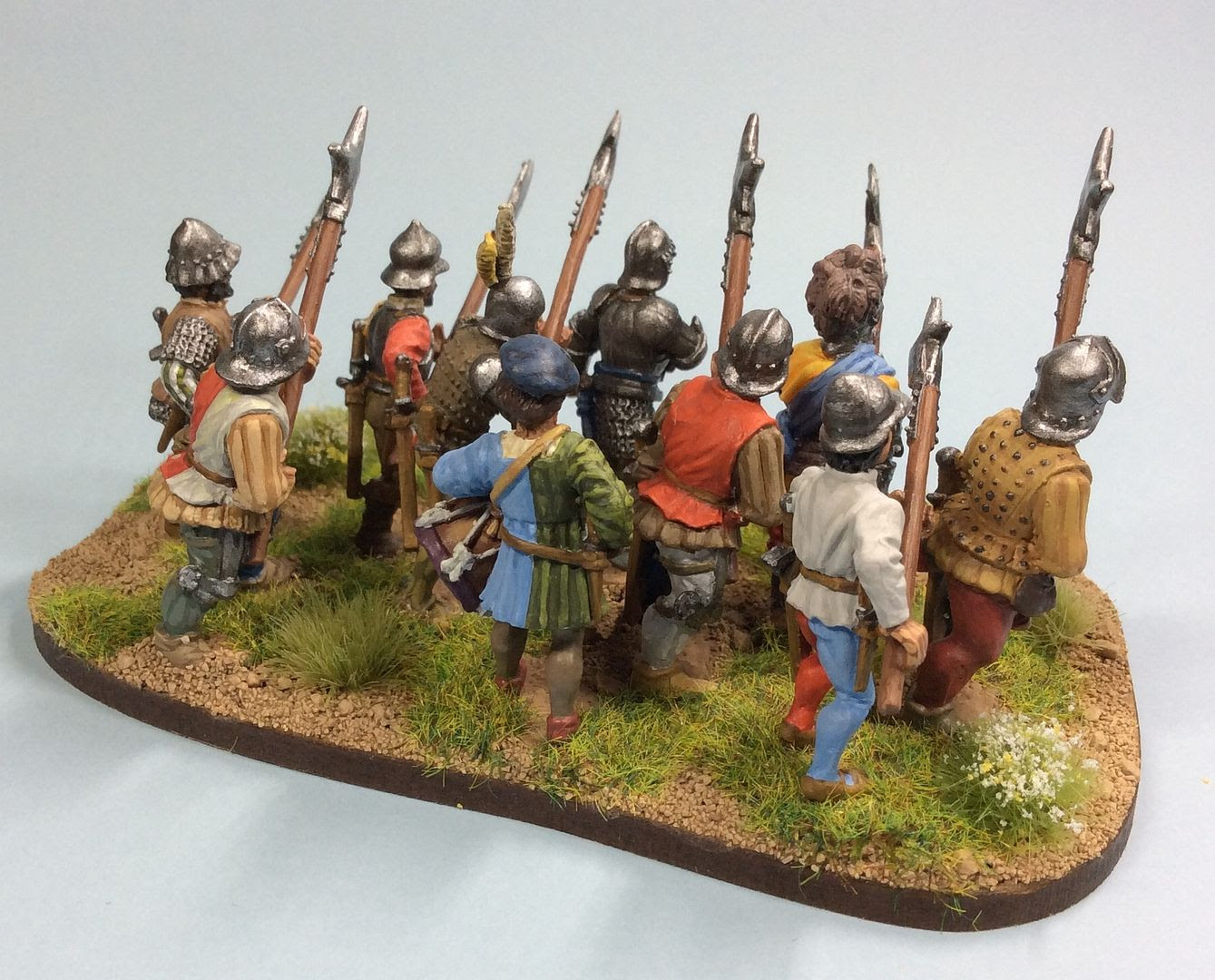 I’m working on a base of Italian handgunners now, all figures on that base from TAG. I hope that I will be able to complete them by the end of the week. We shall see, as they say.

The latest base of figures to join my army of the Papal States under Alexander VI and Cesare Borgia are a unit of TAG Italian crossbowmen. One thing is immediately clear from the pictures, and that is that my painting is not really up to such close up photography any more, if indeed it ever was. I will plead the vagaries of age and infirmity and trust to my chums to play up to the game ~ 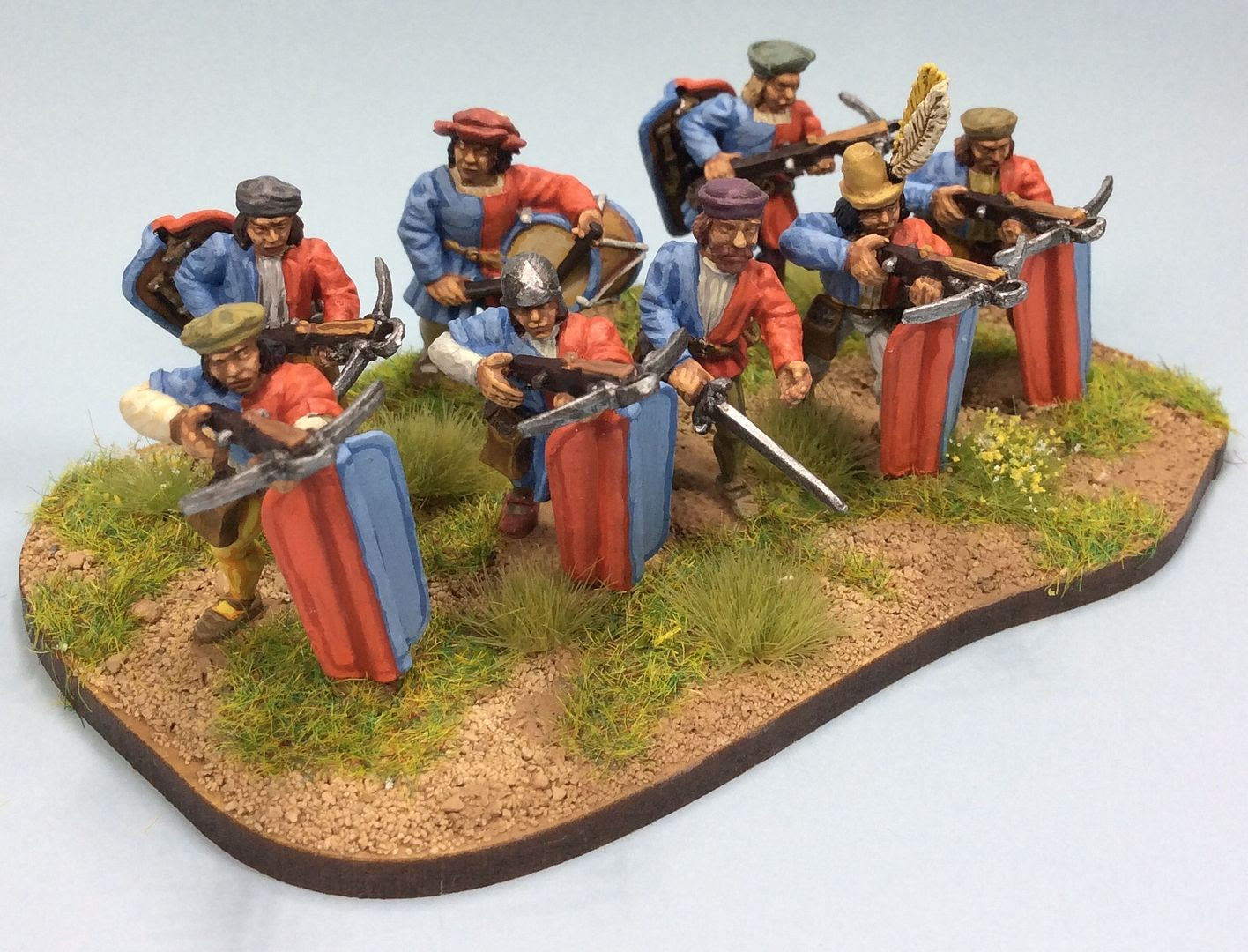 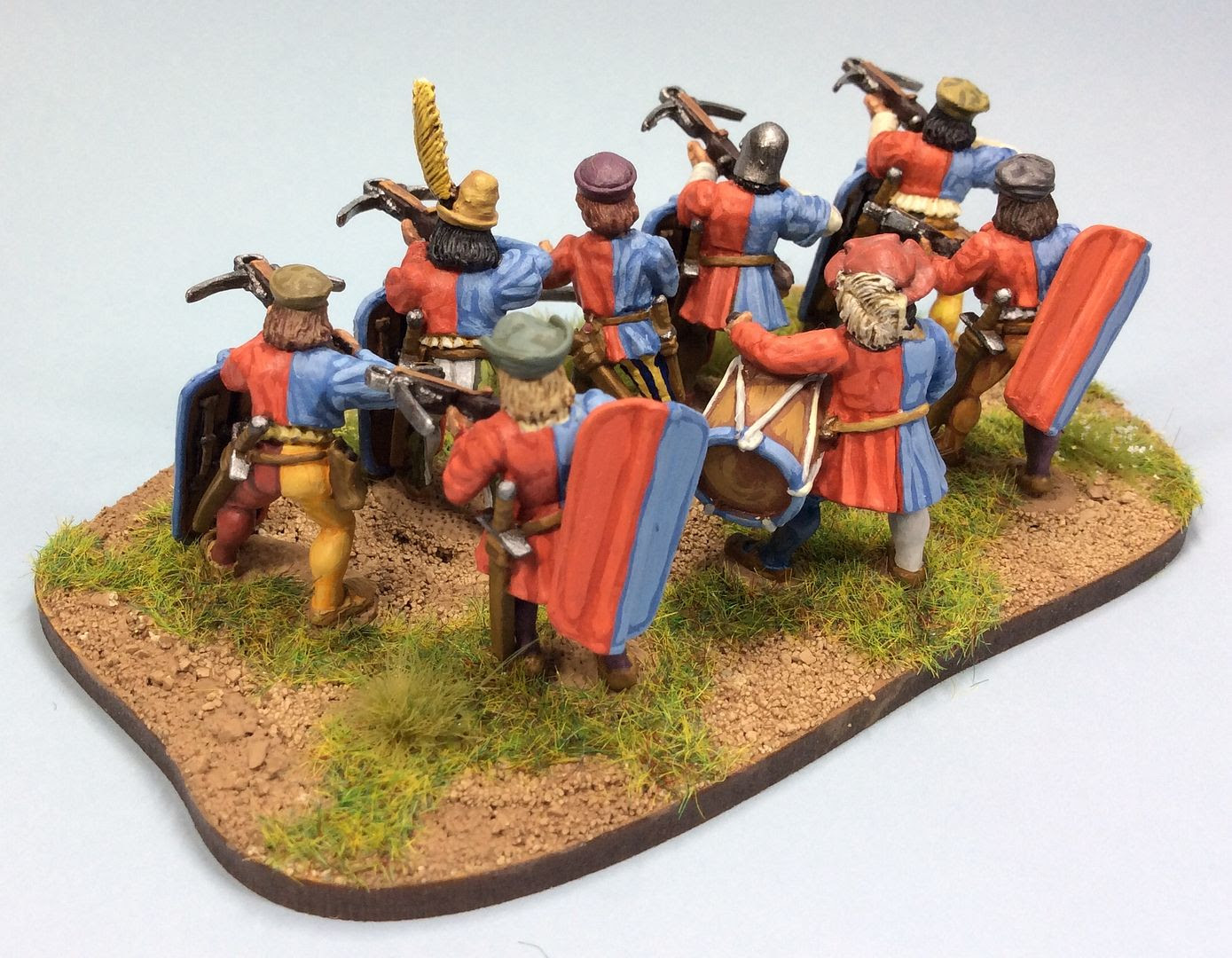 As the earlier unit you will have seen was in yellow and white I wanted something a little more colourful and chose Foundry Bright Red and Union Trouser Blue for the colour scheme. I think perhaps that I should have done more than simply reverse the colours on the pavise now I see them like this, but they will have to do now, although I see VVV have sheets of heraldic devises which I might add later. I shall have to sleep on it as they say. In the meantime, I’m more than half way through a base of Halberdiers for the army, so, onward and upward!