I did manage a game this Monday over at Phil's, a First Carlist War game which he has posted on his blog, "News from the Front" ~ see sidebar for link. I had the worst of a draw, but at least halted my loosing streak! Painting has been steady but not spectacular. I finished the Front Rank civilians from their Napoleonic range for my Wars of the French Revolution project of course, though they need varnishing now, and finally I managed to complete my Saxon Noble warriors, Pompus Maximus' bodyguard for our Ancient games. The lone figure behind them represents old Pompus himself when he fights on foot in desperate moments ~

The Saxons are by Foundry of course, as are all the others in my collection for C4th Rome and its wars of internal conflict. While I think its never safe to say that any collection is 'finished' in my experience, my Ancients are about as close to that state as can be. We'll have to see...

Today has been very busy in GHQ, though not with gaming. Dan, the Owner/Editor of Wargames Illustrated, has been over from Nottingham to spend the day taking photos of my Wars of the French Revolution collection to accompany an article I've written about the project. It should be in the June, and perhaps, July issues, we'll have to see. When the photos are processed Dan will be able to lay it out for publication and I will be able to provide the captions for each picture he chooses. Of course, he takes far more than he will use, even allowing for the extra pictures accommodated in the digital version of the magazine, perhaps as many as 80 images to pick from! It takes a long time, far longer than you would imagine! As sole Backdrop Services Manager, Phil was elsewhere today, I can tell you my arms ached when we had finished, just in time for tea and cake as it happened! In order that you can lay the old adage, the camera does n't lie, to rest I include a few pictures I took before we started on my iPad. Look at the magazine ones when they appear and you'll see what I mean. Dan can make even my stuff look half decent! The whole collection laid out on the table ~ 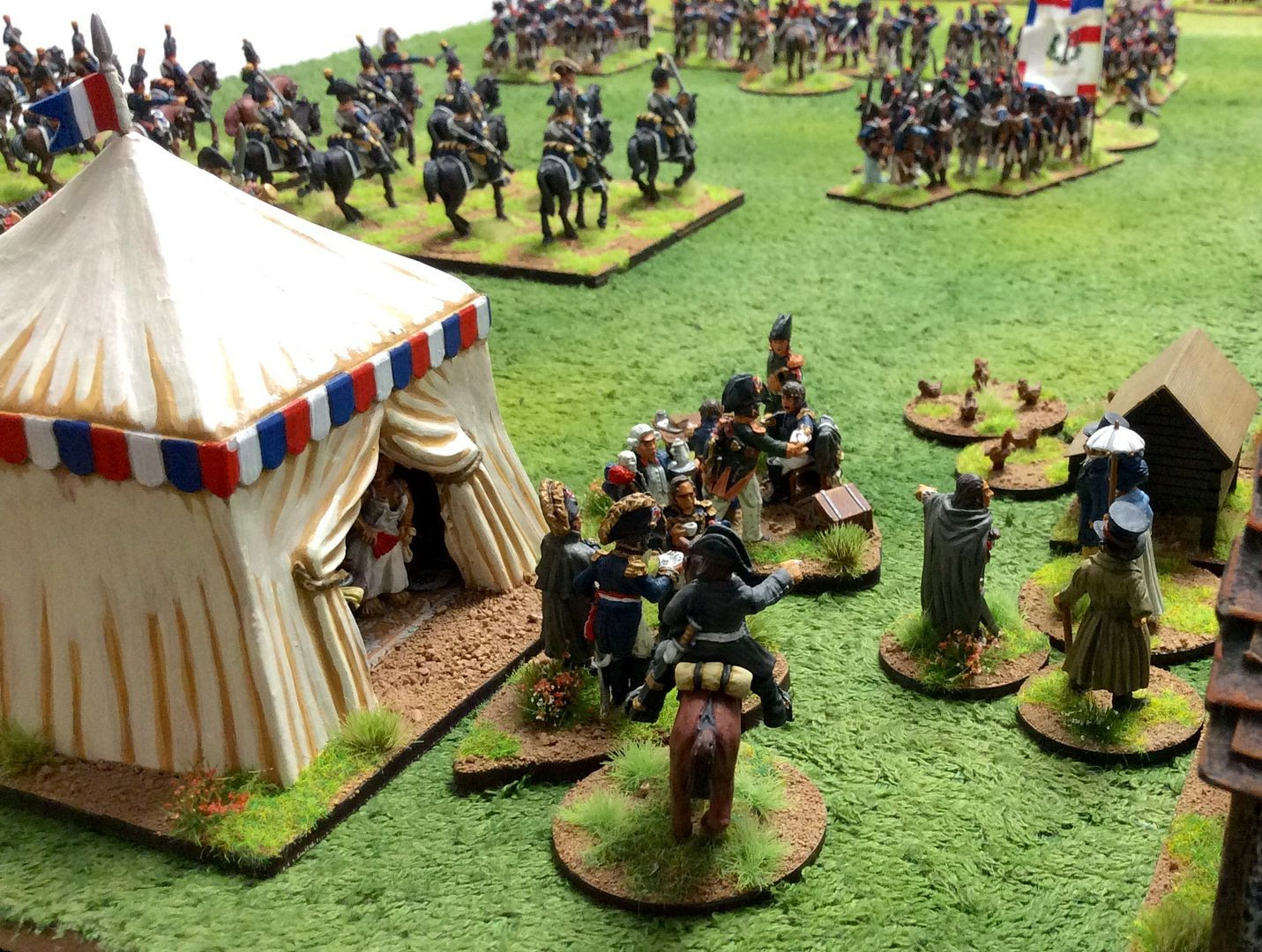 View of the French attack on the Allied right, held by Austrian infantry, their front screened by artillery and skirmishers to counter the French tactics ~ 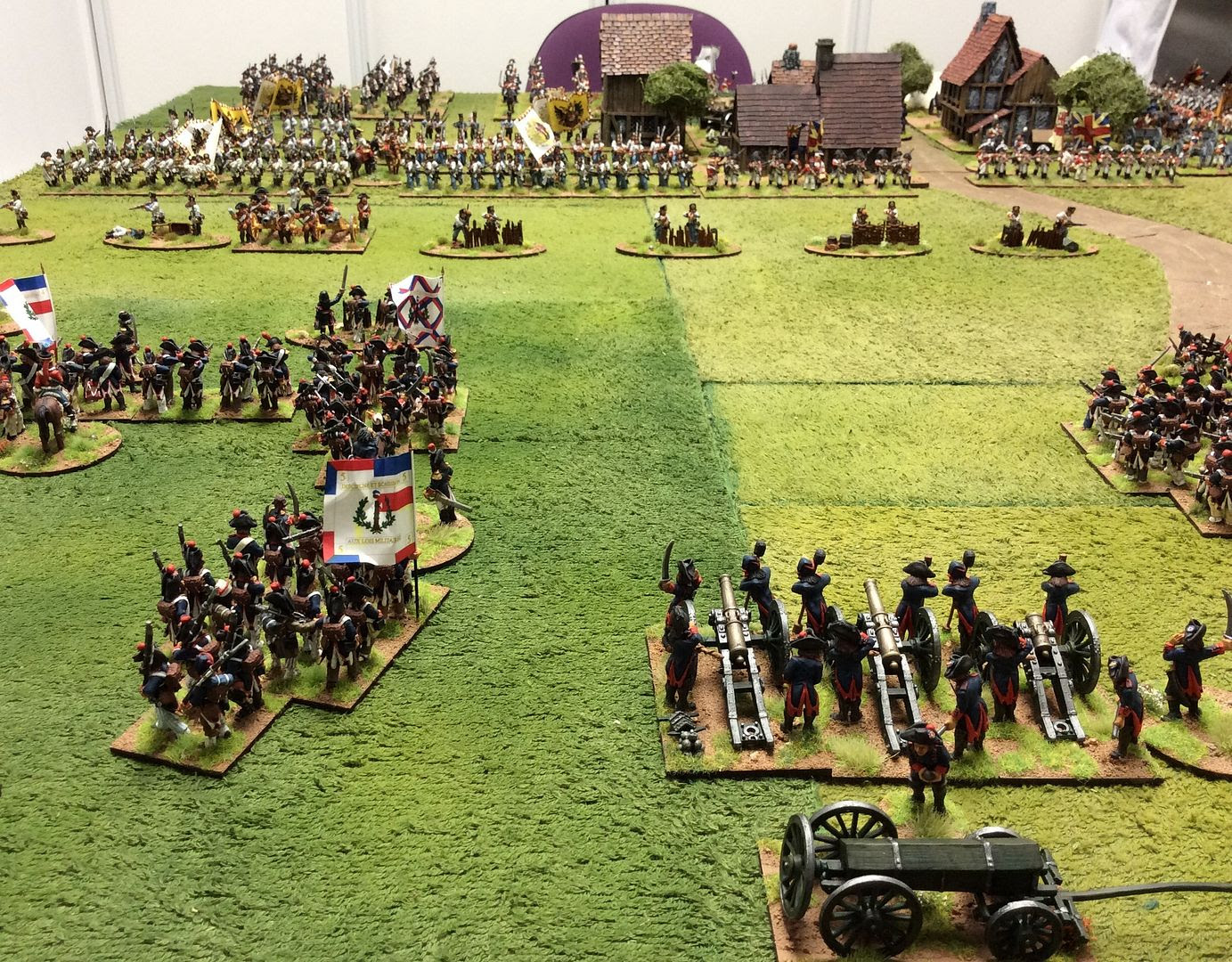 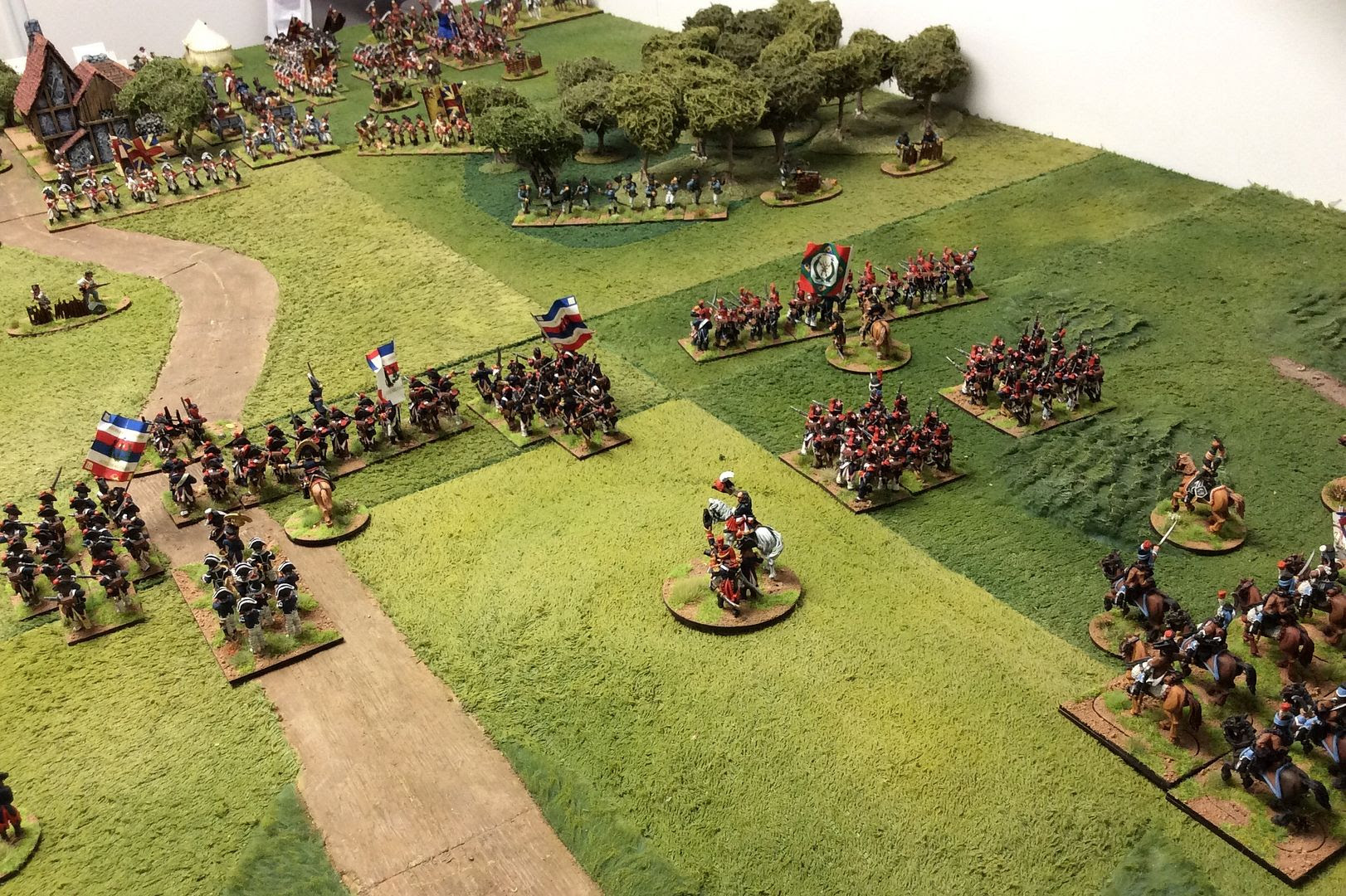 Looking along the Allied front line from right to left. The old Conflix buildings have taken on a new lease of life since I based them up on MDF I think ~ 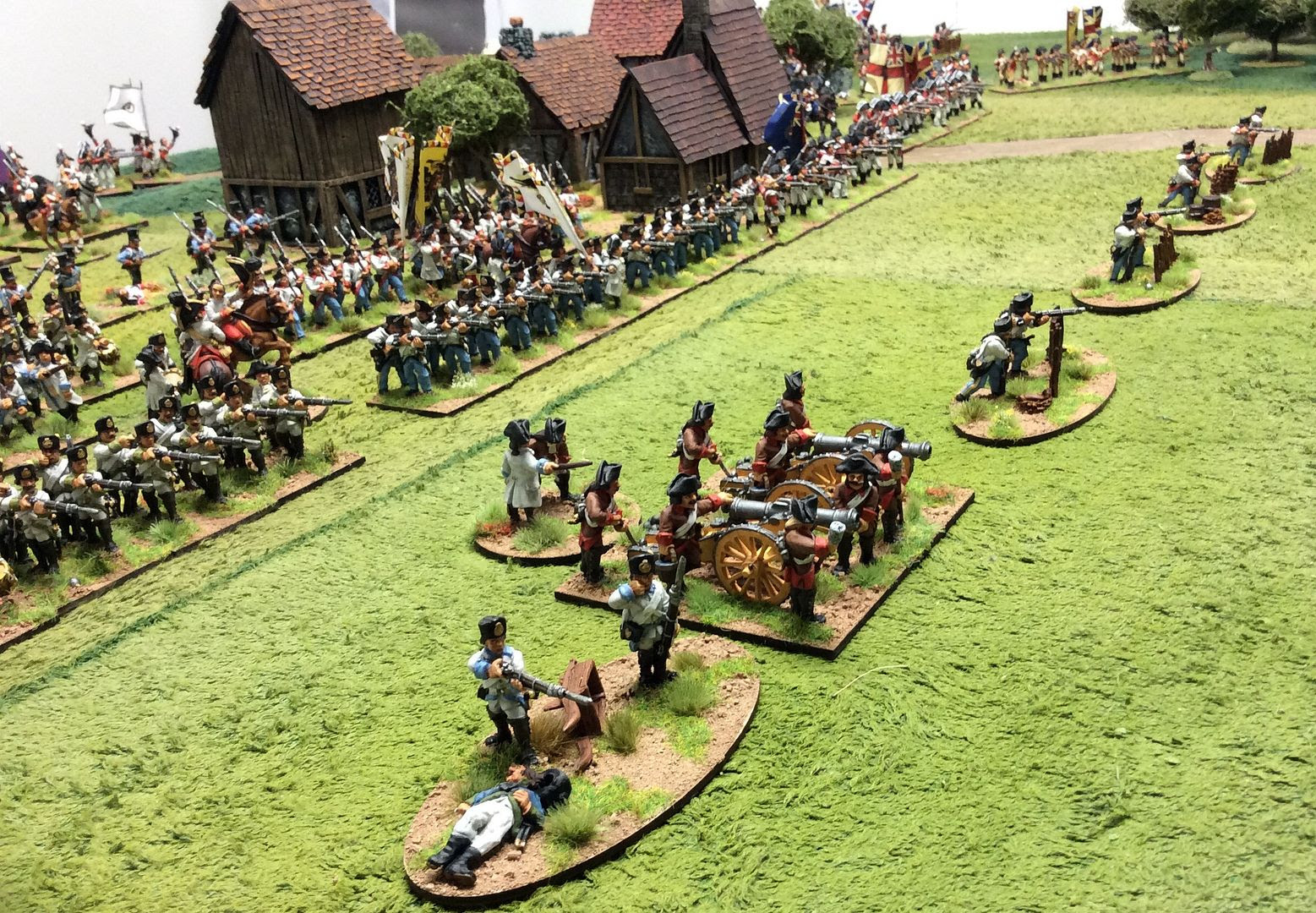 The British contingent on the Allied left flank. Figures by Trent Miniatures, Front Rank, and Riever Castings, while the tents were from Architectural Heritage, now JR I think ~ 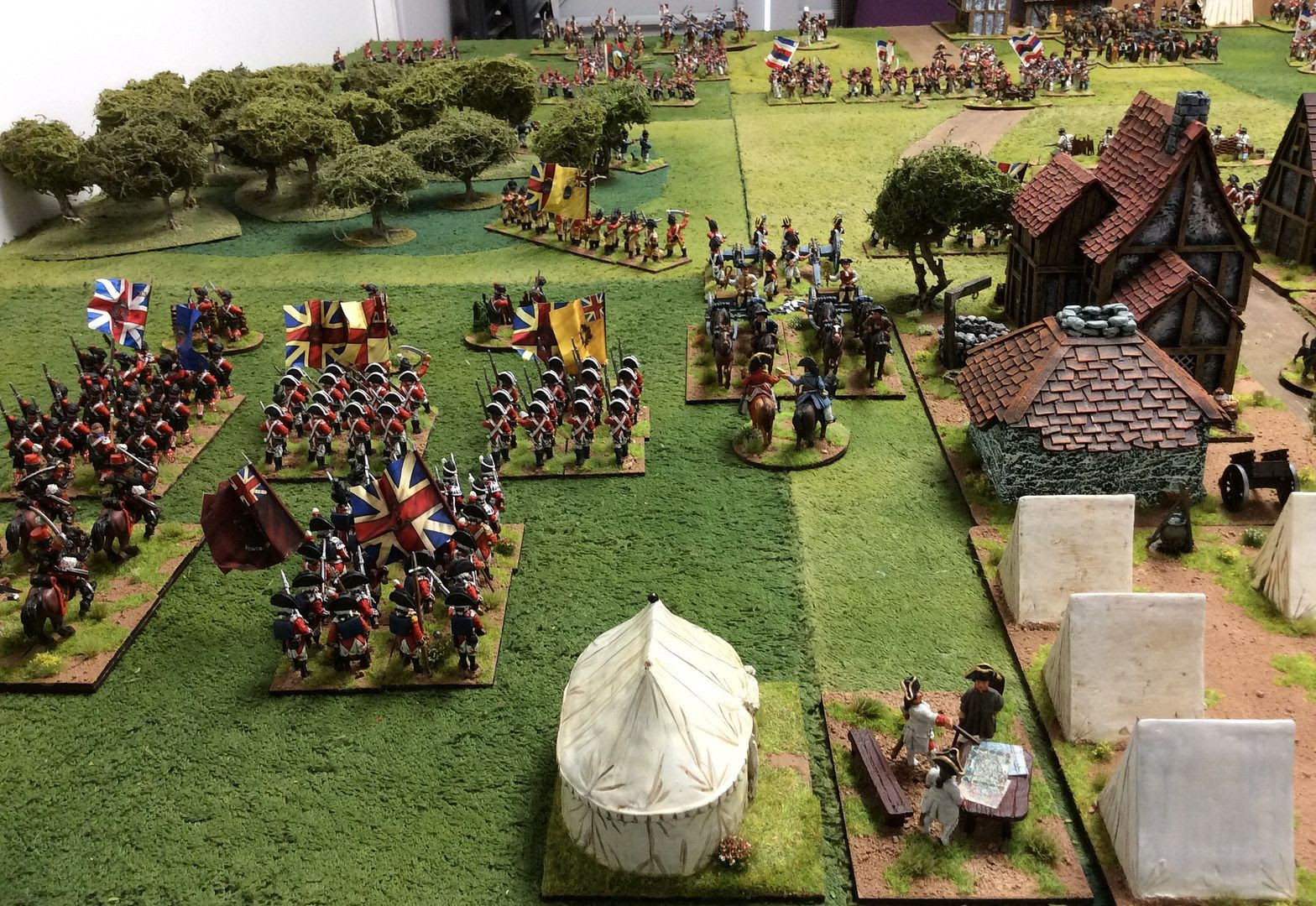 As I mentioned in an earlier Blog entry, at WMMS last weekend I collected some Foundry SYW figures I had ordered to fill a few holes in my French and British armies. I've made a start yesterday on painting these, starting with a figure to represent a French Brigadier. I've also got a British General base of two mounted figures to command the cavalry arm ready to go and two large field guns and artillery crew for the British, who previously only had battalion guns. I hope to finish those by next week, leaving the new French grenadiers, for the four line regiments I have; the extra French Dragoons; and finally the Horse Grenadiers to join the British Horse Guards. But tonight they can all stay where they are, I'm too tired to pick up a brush!
Posted by David at 13:51