Not a lot of people know that!

Jon and I recently managed to meet up in GHQ for a game, our first of 2014! We chose an AZW game, but this time giving Black Powder a try rather than our usual rule set!! Jon, in the guise of Lord Walton, commanded the Imperial force, mostly of mounted troops supported by some artillery and the 24th Foot, while I took command of the Zulus in the guise of that old favourite, Chief Bykelezi M'Tubi, a wily if somewhat unsuccessful commander...

The game was to last 6 turns, with initiative diced for in every turn. Each side had an objective to seize ~ the Imperial baggage for the Zulus and the cattle for the Imperial side. WE began by dicing for scouting, with the winner being able to move one hill if the Imperials or both if the Zulus. My dice were better by one so I positioned the hills as I saw fit. Jon the had to order his force on to the table before turn one started with the Zulus having the first initiative. Some Boers, under their canny leader De Whyt, found them selves somewhat exposed ~ 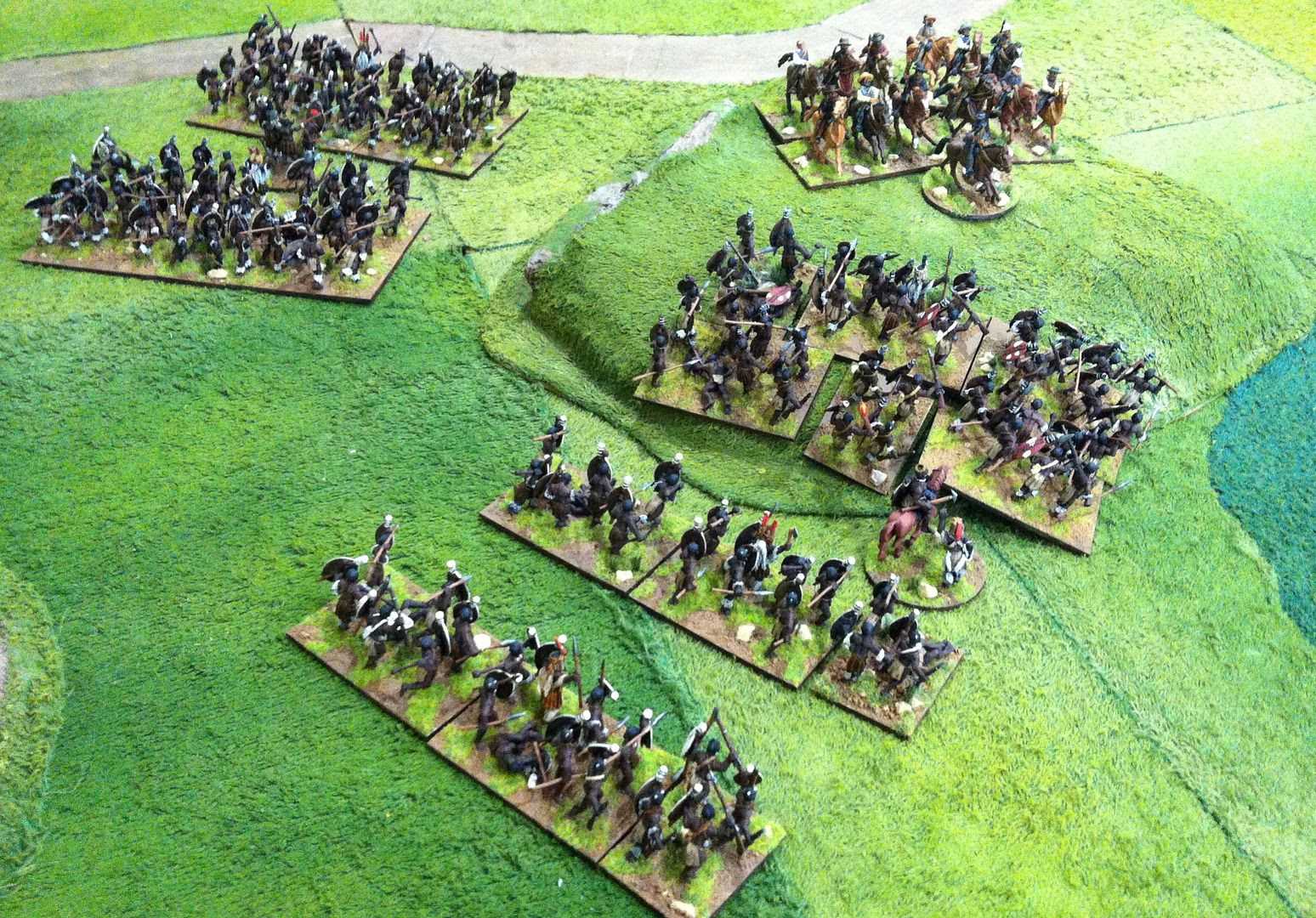 As you can see in the two pictures my Zulus failed to contact the Boers and De Whyt was able to gallop away to safety with his men, at least for now. In the meantime, the Imperial forces began to deploy for battle while most of the Zulus showed uncharacteristic lethargy when ordered to close with their foe! 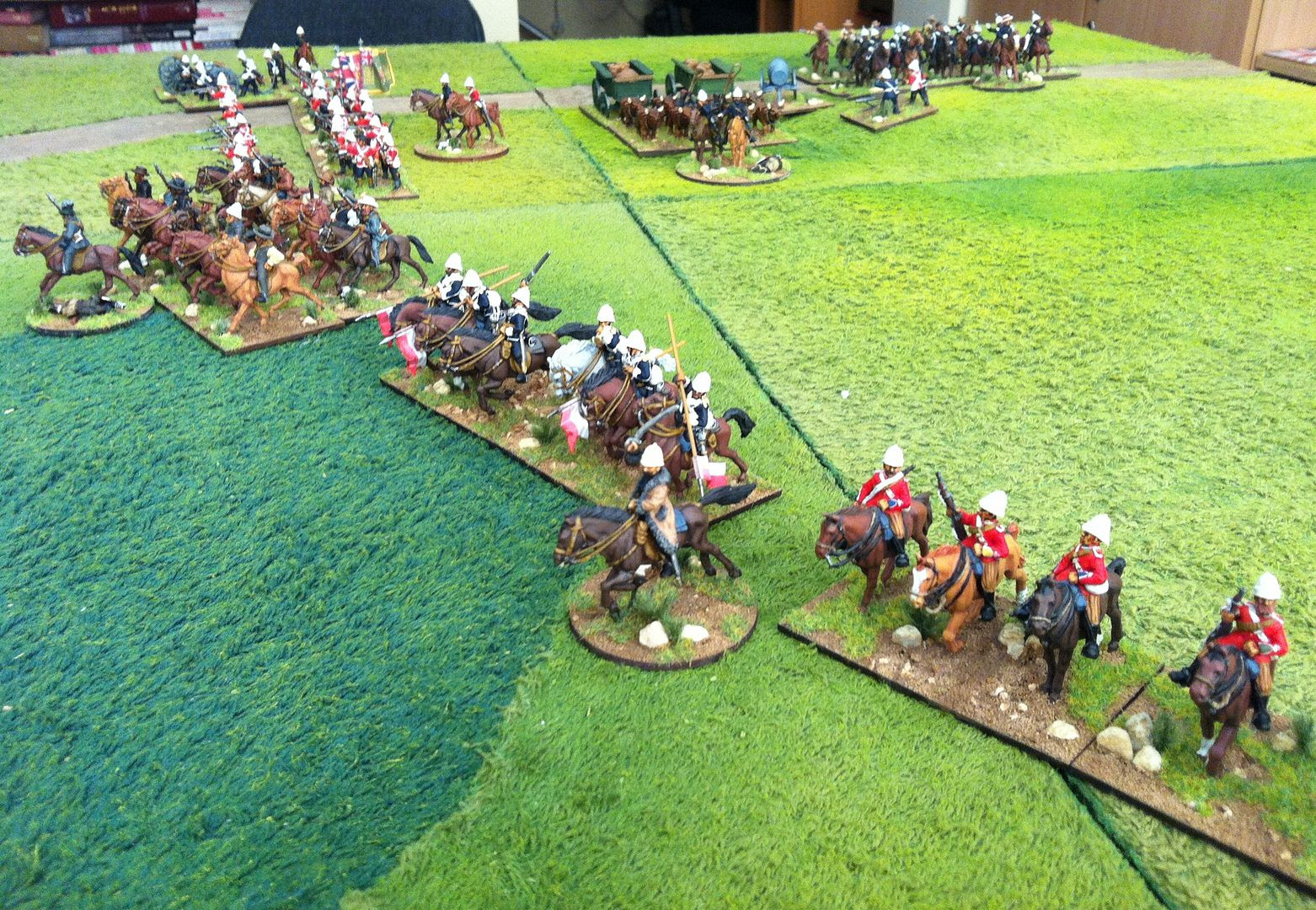 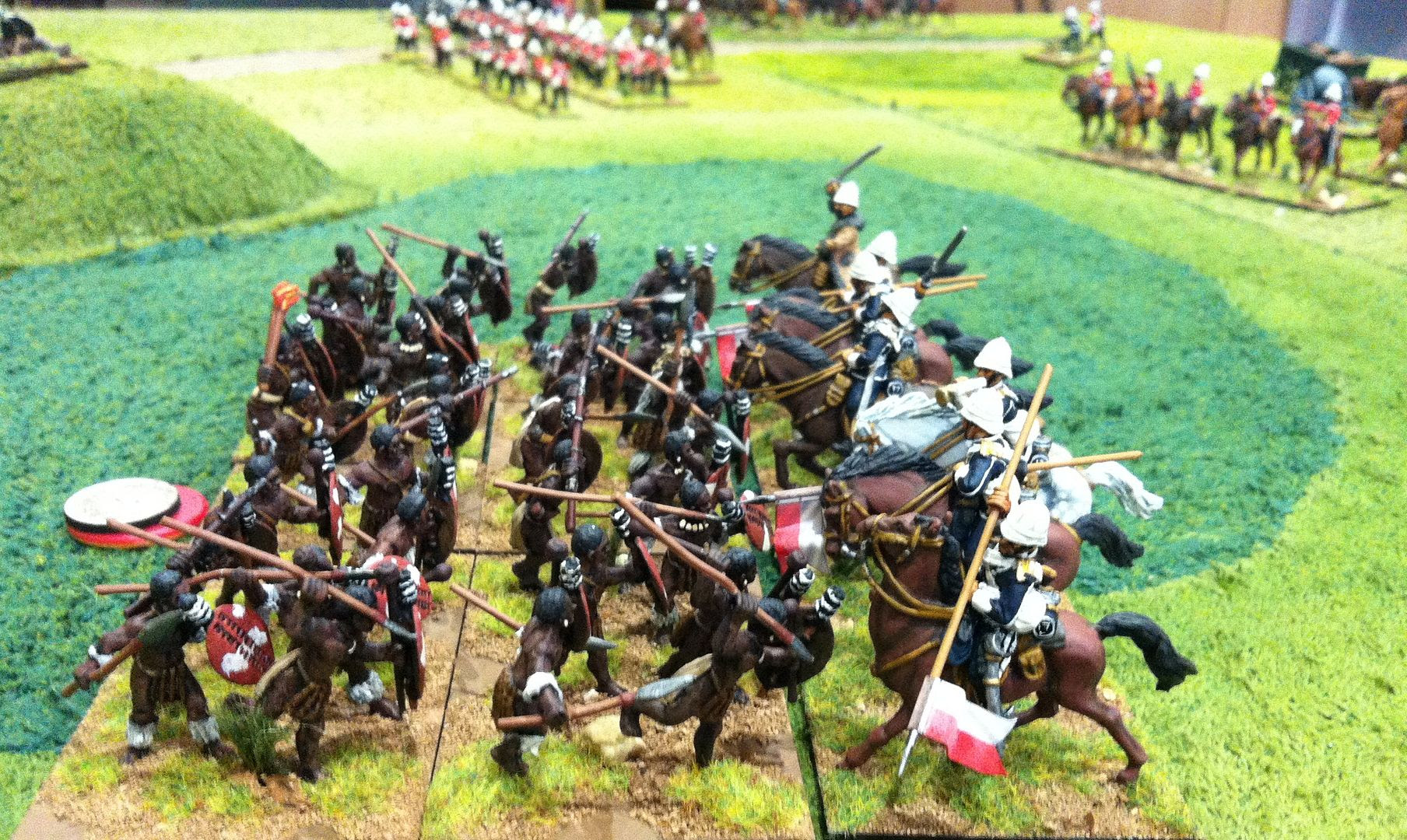 While on the opposite flank the Zulus finally surged forward into action ~ as seen from the Imperial lines, where Lord Walton can be seem coordinating his battle strategy. Despite its best efforts the rocket troop scored only one hit all game! And that with an overshoot! 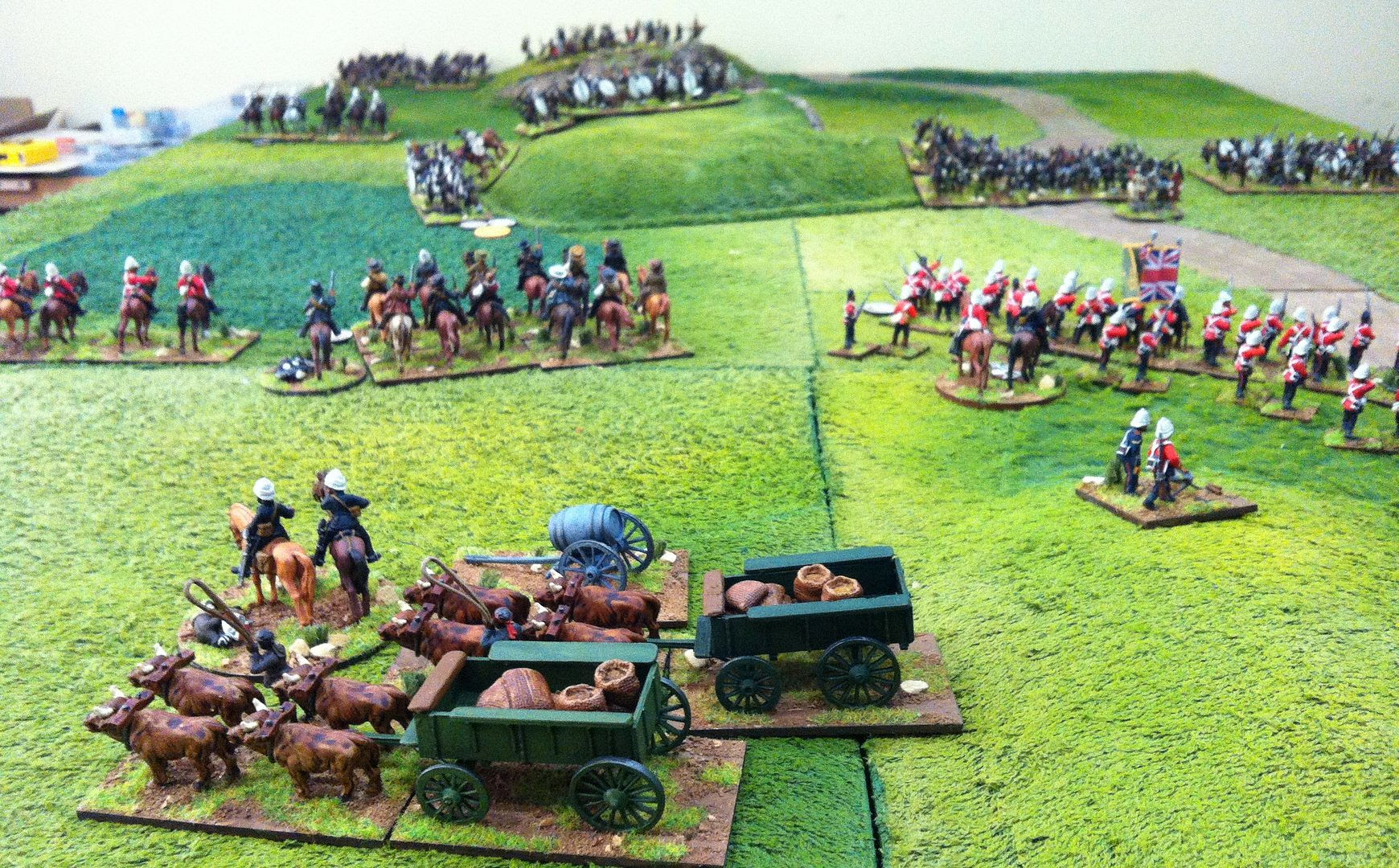 While the Zulus were over running the artillery and pressing the 24th hard, on the opposite flank the Lancers, supported by some Mounted Infantry, finally saw off the Zulus ~ 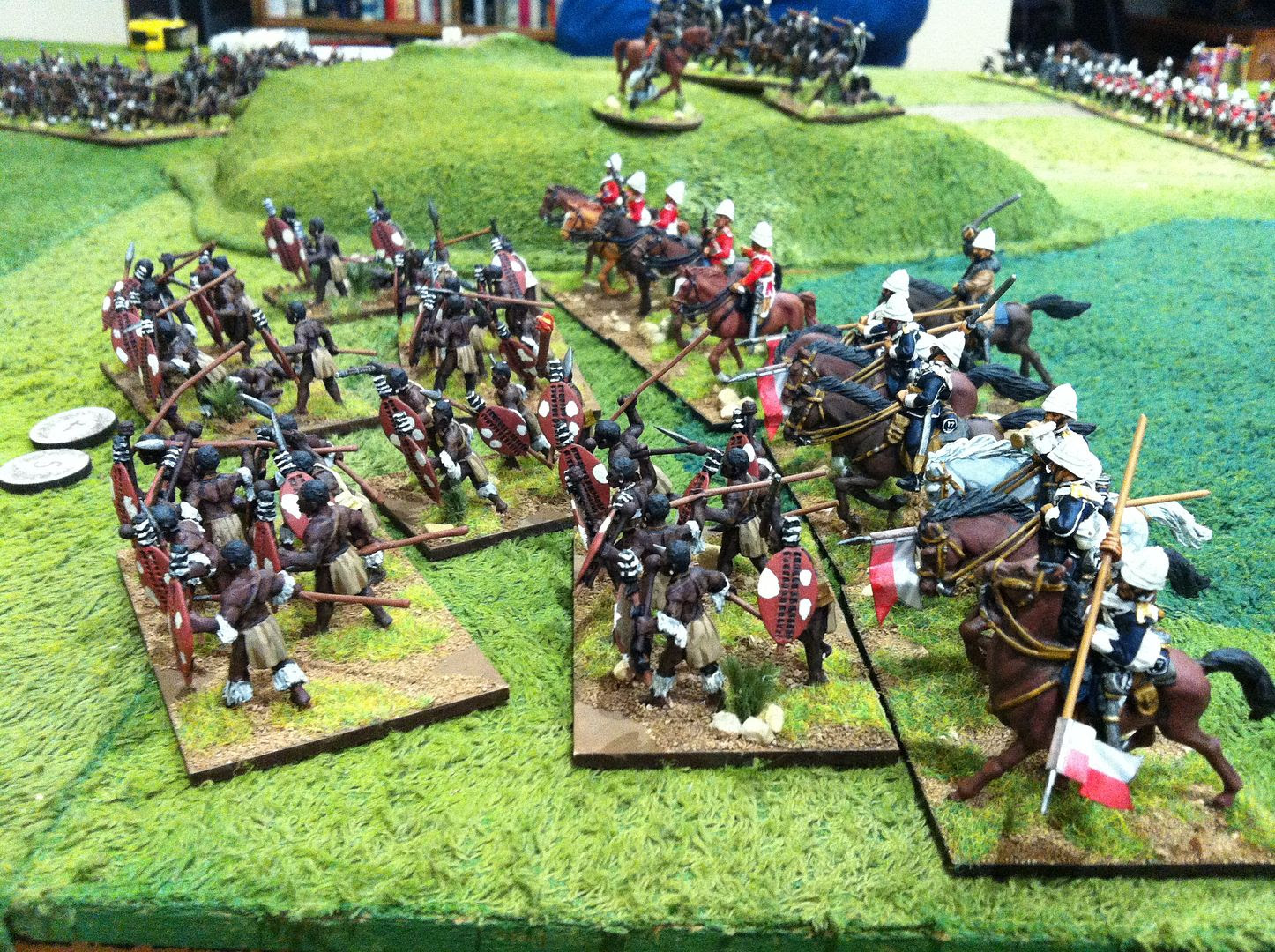 However, it was the end of turn 6 and although the Zulus had had the worst of things, neither side had taken their objective and so we declared the game a draw. Chief Bykelezi M'Tubi had saved his cattle and his wives, though at the cost of the lives of many of his young men. Lord Walton would have a difficult job explaining his failure to trounce the Zulu to his political masters back in London too!
A grand game which we both enjoyed, with many tense moments right up until the end, with neither side being quite close enough to seize their objective! A fitting memorial to the 50th Anniversary of the movie, "Zulu", a perennial favourite amongst wargamers I feel! Next week, its back to the C17th and the English Civil War...