Last night Jon and I settled down in GHQ for our now monthly game, a rerun of the ACW battle Phil and I had played out on Monday. I had tweaked the scenario for the Union side very slightly, making each regiment enter the table on a separate command roll to simulate the army strung out on the march. Brigade orders were only allowed once all the constituent regiments had mustered on the field of battle. As before the game length was set at 12 Turns and the rules were Black Powder with the same addition from Glory Hallelujah respecting firing and moving orders. Jon commanded the Union army and once again I took the Confederate command. Could Jubal E Bykleigh register a second win over 'those people'? Let's see, shall we ~


So, there we leave 'Old Jubal', plumb tuckered out after a very hard fought battle which swung first one way and then the other, but ultimately left neither side able to achieve the decisive results needed to turn the battle in their favour. Poor Command Rolls at crucial times hampered the Union attacks, while Confederate fire was too often ineffective. With both sides suffering Disorder in epidemic proportions the battle degenerated inevitably into a Firefight which neither side was able to win. But still, we both thoroughly enjoyed it and replayed key moments over a convivial beer afterwards. Our next game will be on my Birthday, 31st May, and will most likely be a F&IW game using Sharpe Practice.
As a final note, I must have been enthused by the games this week though, as this morning found me painting an old unit of Dixon ACW ragged Rebs from my 'Lead Pimple'!
Posted by David at 08:09 12 comments:

War in America 4 ~ the ACW version.

No Salute for Phil and I this year again, but no doubt Jon will fill me in on all the details on Wednesday. Instead I've focused my efforts this weekend on preparing for today's game with Phil, the third in our sequence of games set in North America, this time set during the ACW. I've made a few slight alterations to the basic layout, namely removing the corner harbour and adding a couple of low hills and a few rail fences, just for the look of the game really. We used Black Powder as the basic rule set again, although we incorporated one idea from the Glory Hallelujah supplement as a trial, the moving only once in order to fire rule. So, to the Battle of Penda's Farm ~


The game lasted 9 Turns before Phil admitted defeat, but effectively it was over in Turn 7. The new Glory Hallelujah rule on moving and firing worked really well we thought, even on the few occasions when we forgot it and left troops to move and then found they could n't fire! The real heroes for my Rebs were the boys of the 10th North Carolina holding the stonewall. They beat off five regiments in succession in Hand to Hand combat and passed every morale check they took! For Phil, the failed Regulars' assault on the Reb right really took the game away from him and meant he was always responding to events beyond his control. But we both thought it a grand game which might easily have gone another way another time.
Next up in GHQ should be a replay of this game with Jon on Wednesday night. We'll see how that goes in due course, but for now we will bask in the reflected glory of the 10th North Carolina, the "Lions of Penda's Farm"!

Expanding, and not my waistline for once!

As I believe I've banged on about before I have no new projects in the pipeline this year, for the first time since I retired from teaching in April 2002. Strangely I've found this unusual situation to be unexpectedly liberating rather than depressing as I had feared. I've found myself painting only when and what I felt like painting rather than feeling as if I were on a self imposed treadmill, pressing on with numerous figures and units towards the goal of getting a 'new game' on the table in GHQ.
One period of peripheral interest I've painted extra figures for is the French & Indian War. We've played occasional games here in GHQ using amended Astounding Tales rules and had great fun, but last year I bought the new Sharpe Practice 2 ruleset with a view to playing F&IW games with them instead, as I had enjoyed several games at Phil's of their WWII rules, Chain of Command. Working through their helpful lists showed me that I was short of figures for the core of Regulars on both sides. I rectified this at Warfare in Reading last November, buying the figures from Redoubt Enterprises to match those I already owned. I've been painting and basing them off and on and now the whole is finished I thought you'd like to see them for yourselves ~ 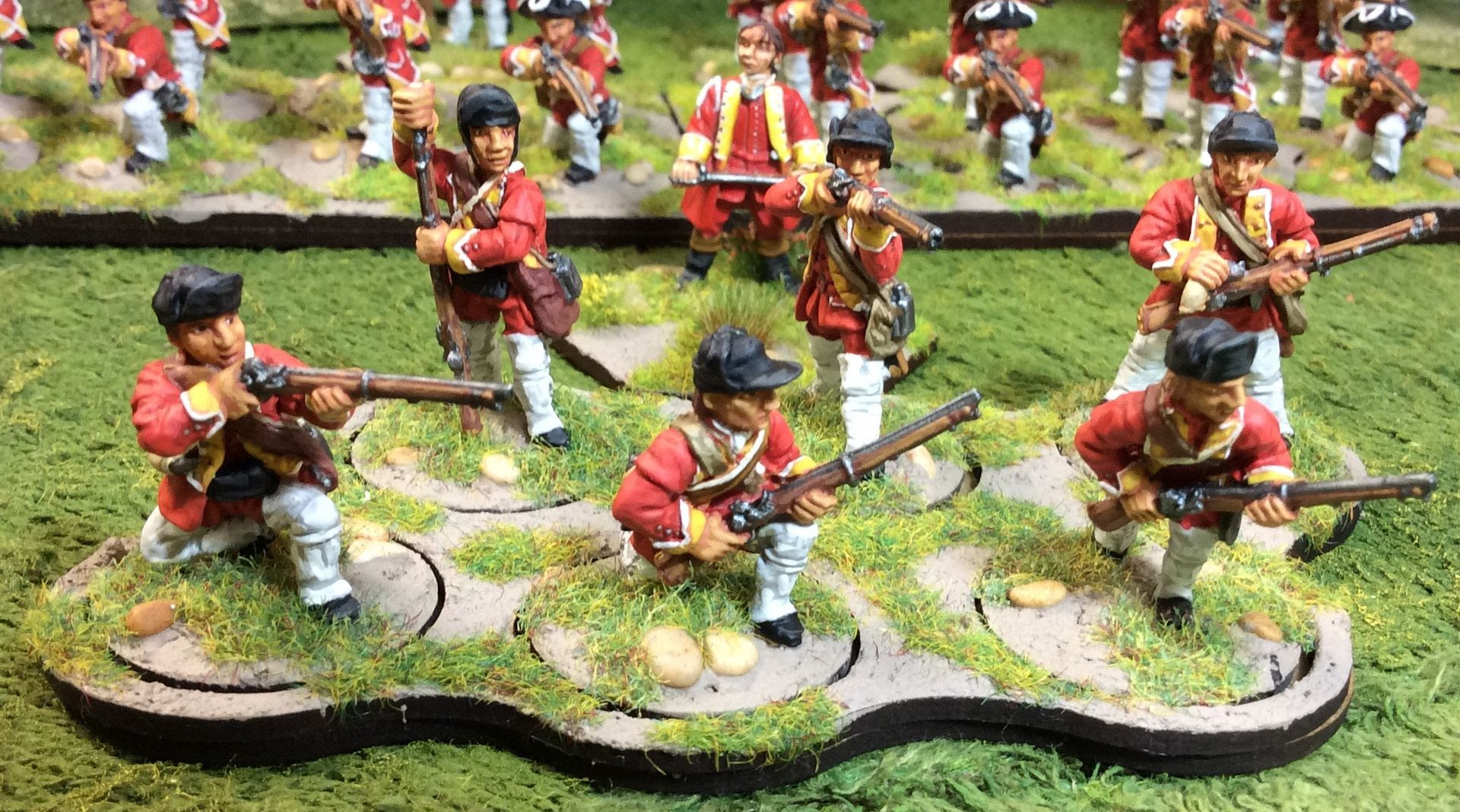 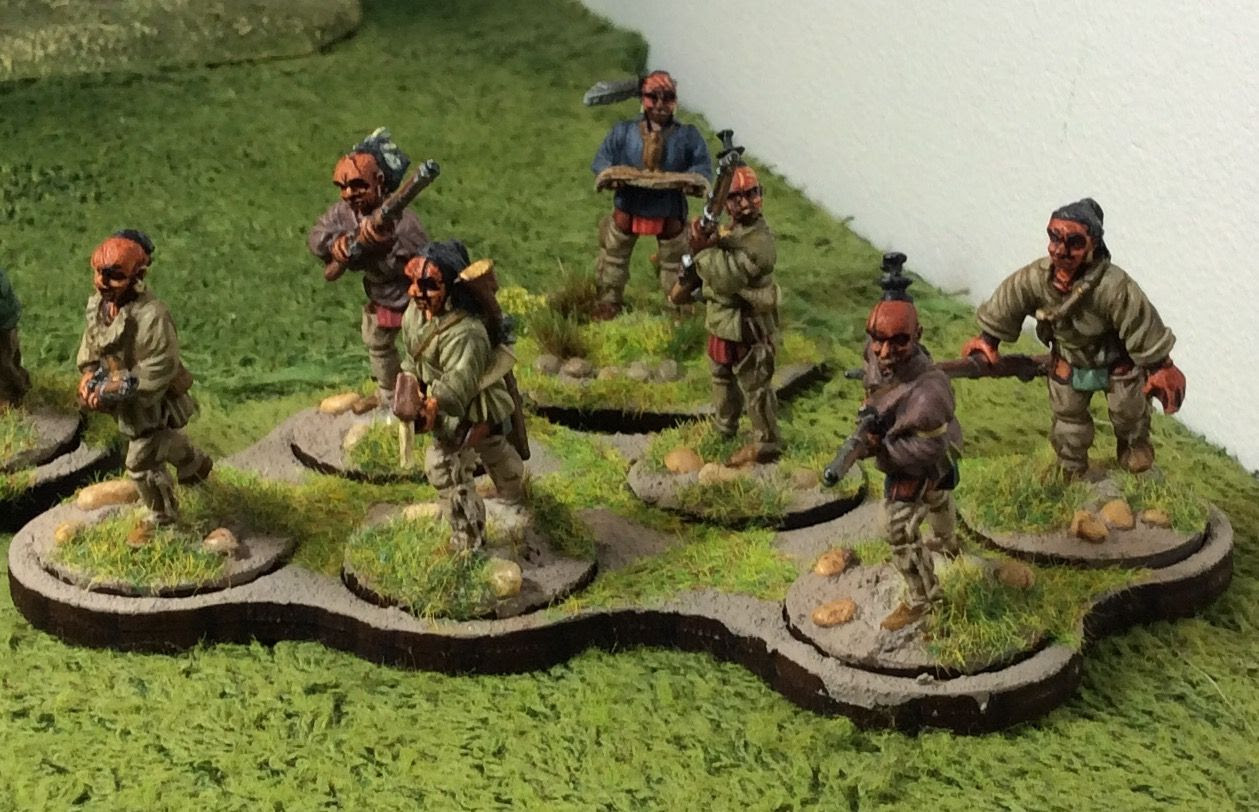 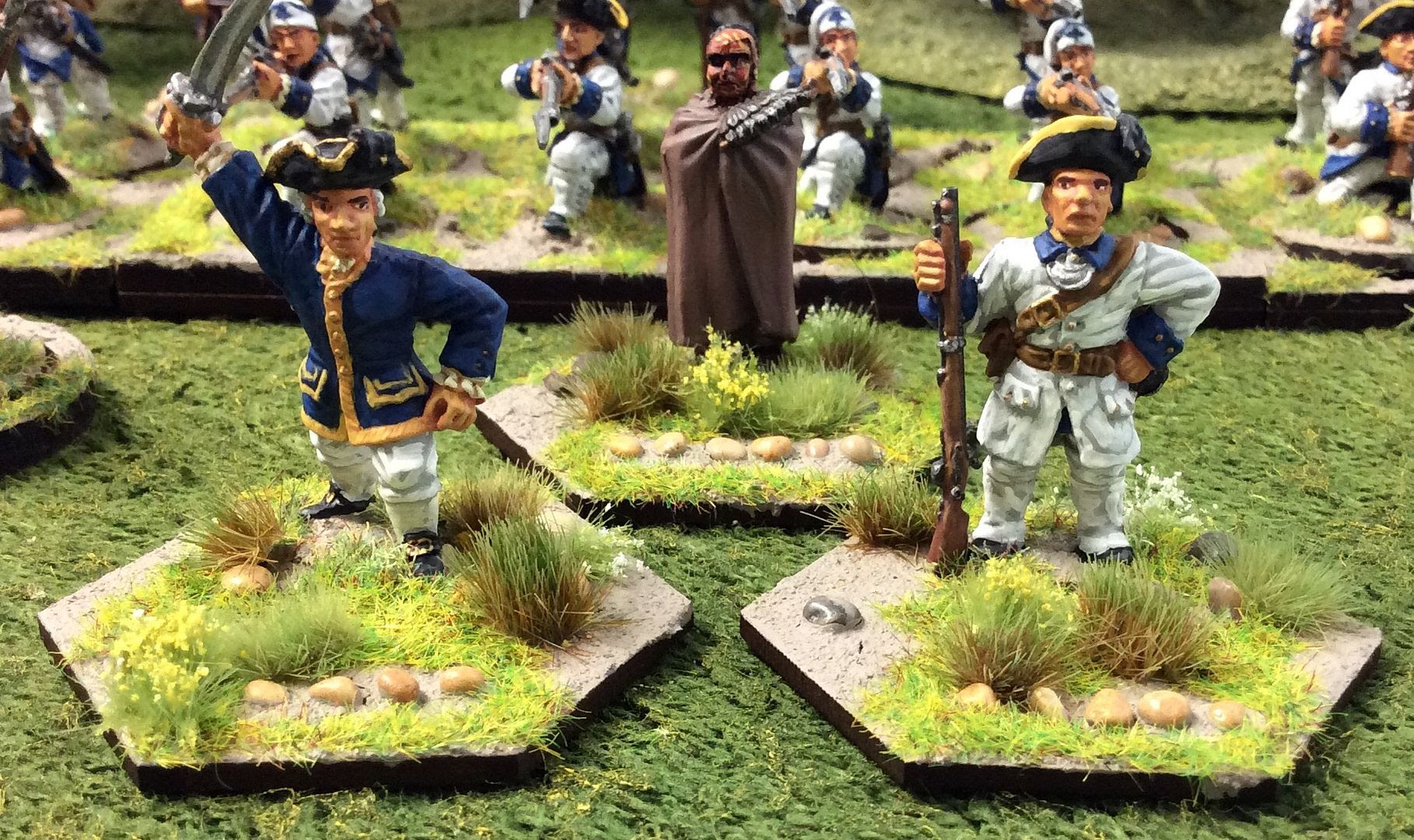 One unexpected consequence of this photo session is that I've realised I have only 3 French command figures to the 6 British ones! Doh! I really should write things down rather than trust to memory now a days! In the short term I can borrow figures from my main SYW collection until I cross paths with Redoubt at some show or other and pick up the French High Command set.
As I started by mentioning painting, I thought that I would finish on the same theme. I'm currently working on a French National Guard unit for my FRW project, using Foundry early French in bicornes for the unit. I've managed 12/24 so far and am surprised to find that even though on the small side I am managing to make a decent fist of them. A by product of the lack of pressure perhaps leading to more relaxed and focused painting? Who can say, but I'm pleased by the end product so far. A Bientot Mes Amis!
Posted by David at 04:35 20 comments:

A Mere Matter of Marching?

Earlier this week Phil and I played out the next installment of our themed War in America games, this time set in the War of 1812, using the same table top battlefield and scenario of course. Phil took command of the attacking American force and I commanded the Anglo-Canadians. The captioned pictures tell the unfolding story of the battle, fought using Black Powder rules, over our customary 12 turns. The figures are all by Wargames Foundry from my own collections ~

A most enjoyable game which swung first one way and then the other for the full twelve turns. Phil was hampered in the early moves by poor Command Roll dice while I succeeded early on in bringing on my first Brigade of Regulars which stiffened the Militia at a crucial time. When his other brigades arrived they were slow into the field allowing the British to take the initiative. For them the Light Dragoons were especially gallant and effective, shoring up the weak left flank first, then delivering two vital blows to the enemy.
Like a number of my more elderly collections, if I was starting again I'd do it differently, but for now they must do for us. I bought most of the figures in the large £5.00 mixed bags when they first moved to Nottingham from Guernsey. That dates them and me! Anyone starting the War of 1812 now in 28mm has ore choice of figures and ranges, but for me these have a charm and a history which makes them special. Next up in GHQ, an ACW game in two weeks. Slightly altered terrain already in place on the table, but the same scenario of course. Back to painting Anglo-Zulu War horse holder sets now. Joy!
Posted by David at 13:49 29 comments:

A few additions to my VBCW in Wolverhampton & South Staffordshire have made it across the painting desk and into GHQ, starting with these 1st Corps Scout Troop figures which I picked up at WMMS last month you may recall. Searching the web for information on the colours was interesting, didn't realise there was so much variation around. I settled on a colour scheme from illustrations on chocolate  and cigarette collectors cards as most contemporary photographs were obviously monochrome. The figures, or rather some of them, come with a selection of right hands holding various items of equipment suitable to Scouting in 1930's. I replaced three of these with very unscoutlike weapons, adding a greenstuff hand in one case. Well, it is the VBCW! Anyway, here are the 4th Wolverhampton Scouts in 1938 ~

Next, at last year's Derby Worlds I bought a selection of Footsore Miniatures figures on the Flea Market which included a few colour bearers. As I had two left over I painted one up for each side, the Workers' Defence Committee and a Personal Standard for Eddie VIII. The former has a flag provided for me by Pete Barfield as ever, the latter a commercial flag gifted by a chum. Here they are anyway ~ 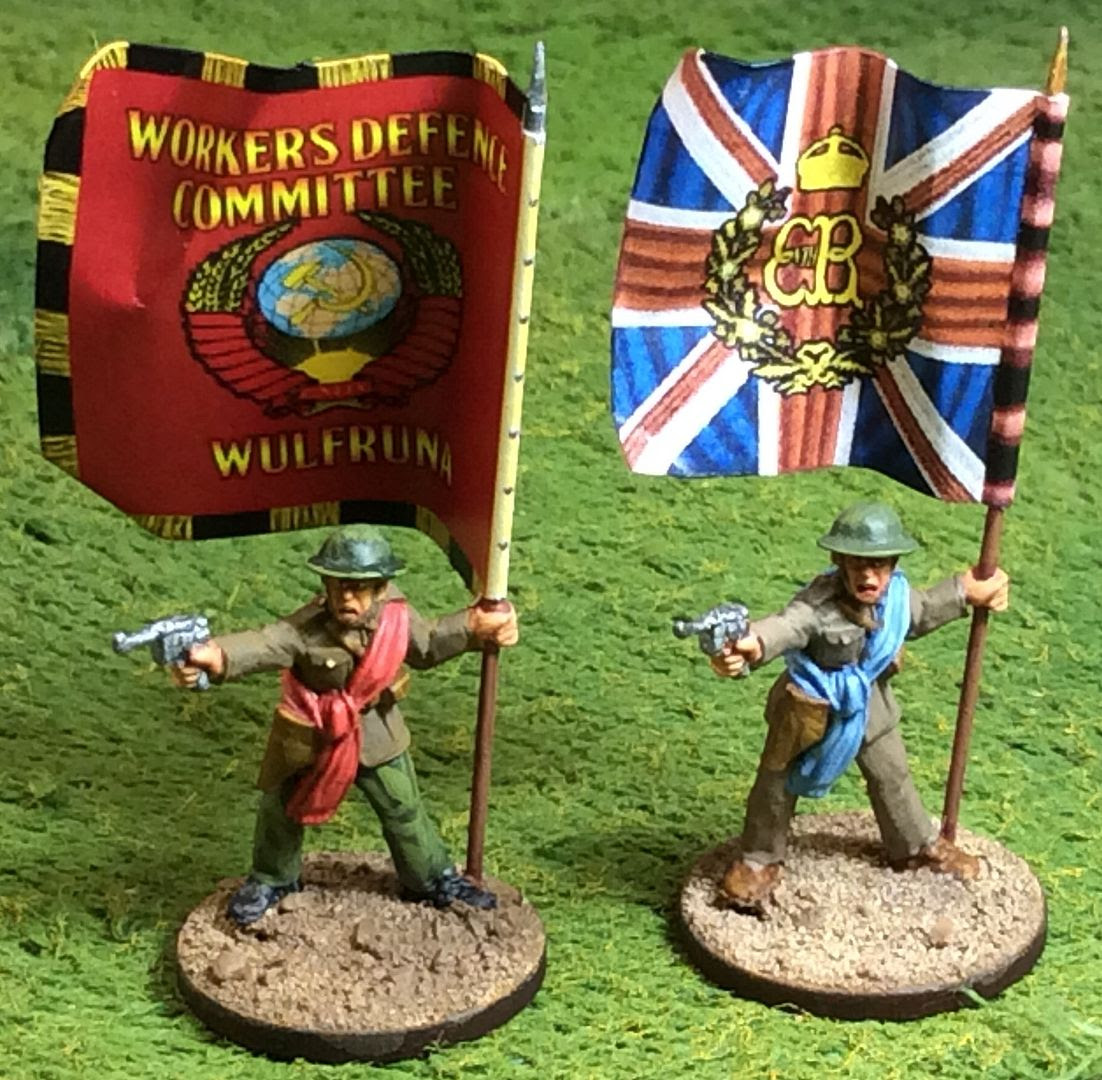 Next, a Christmas gift from Phil, an armoured truck conversion. As its the only one I have at present it has no detailing for any particular faction of my Peoples Republic of. Wolverhampton army, if I add others then I'll decorate it for the Boulton Paul Workers Cooperative. Why? Well they produced powered turrets for British bombers in WWII, so its appropriate given the vehicle's turret I feel ~ 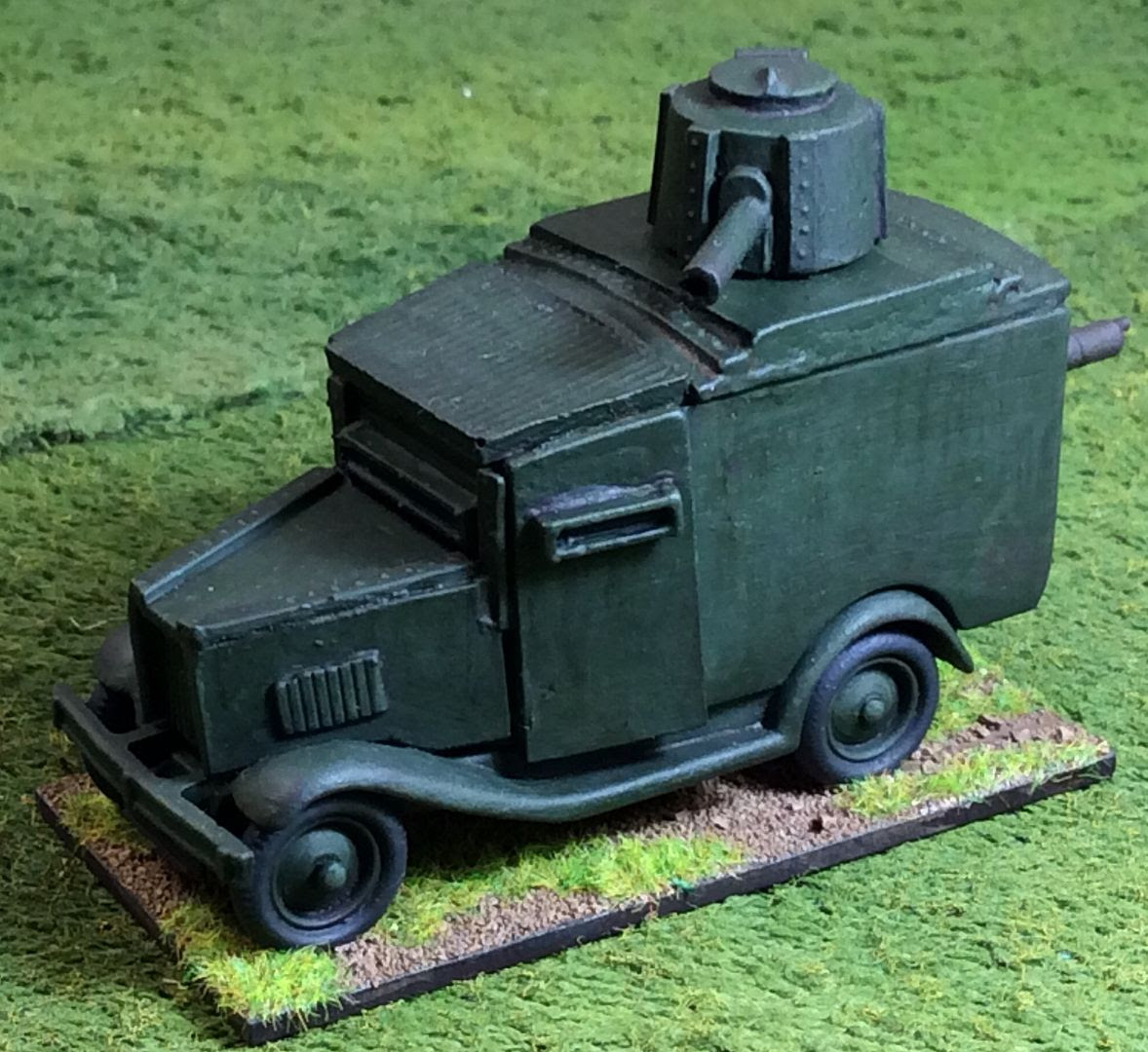 I was in town on Friday last week quite by chance and found the monthly Farmers' Market in full cry. Amongst all the foodie stuff there were two chaps with a stall selling diecast vehicles, Lledo, Days Gone By, Corgi and such. I picked up three more vehicles for my VBCW project at £1 each ~

I'm hoping to add an airfield to the game this year, as we live on what was Wolverhampton Airport from 1938, hence the RAF vehicle. Lucas Batteries were in Birmingham, but they probably had customers amongst the local cycle, motorcycle and car manufacturers. Still no joy on the Wolverhampton Corporation bus though. Lastly, a Pulp Figures 'Poirot' who will be added to the game as Head of 'Manders Intelligence', MI9 ~ 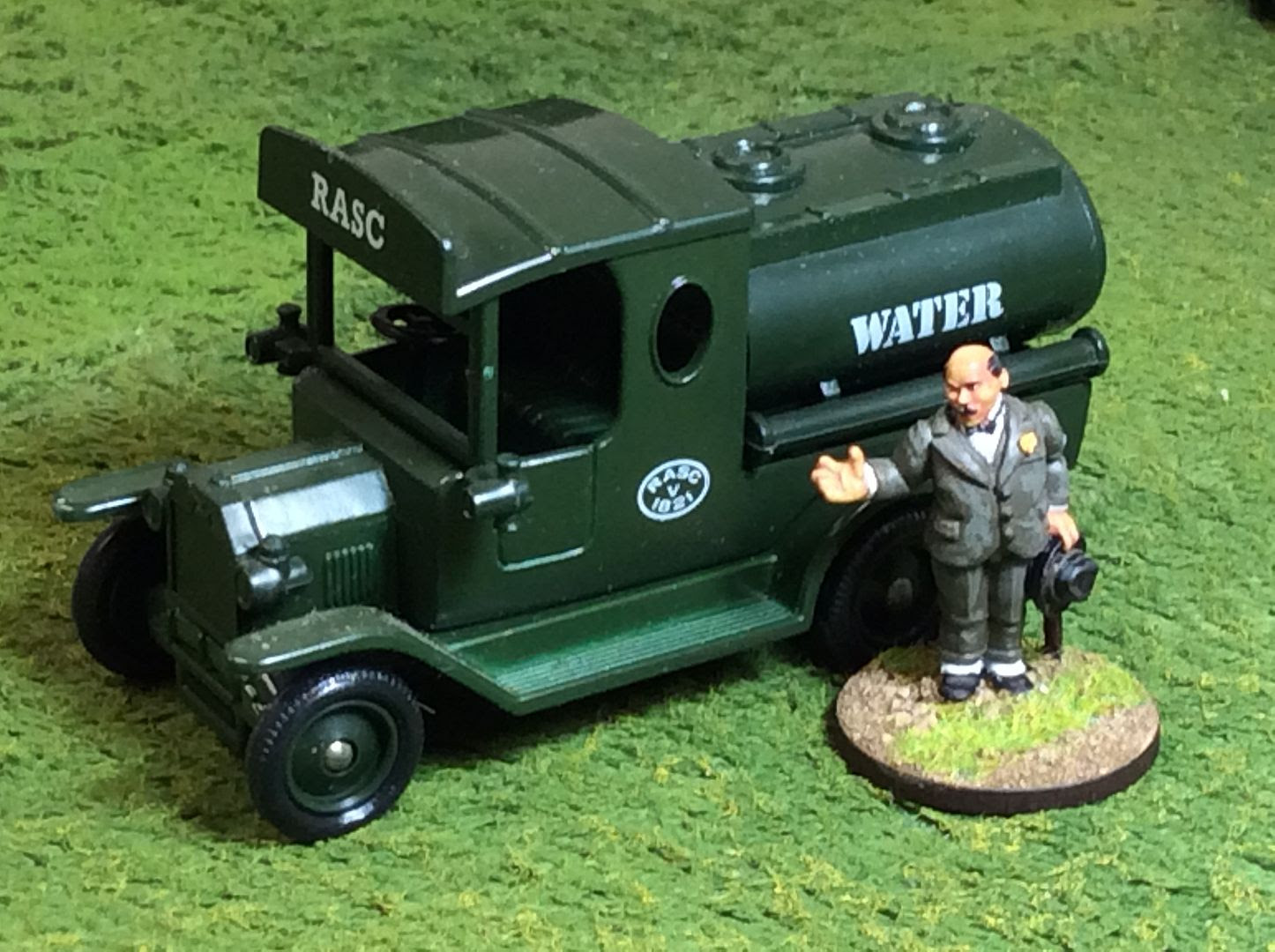 I'm working now slowly on some Empress Miniatures AZW horse holder sets, one each for the Boers and the British Mounted Infantry. More on them when they are done.
Posted by David at 14:15 14 comments: