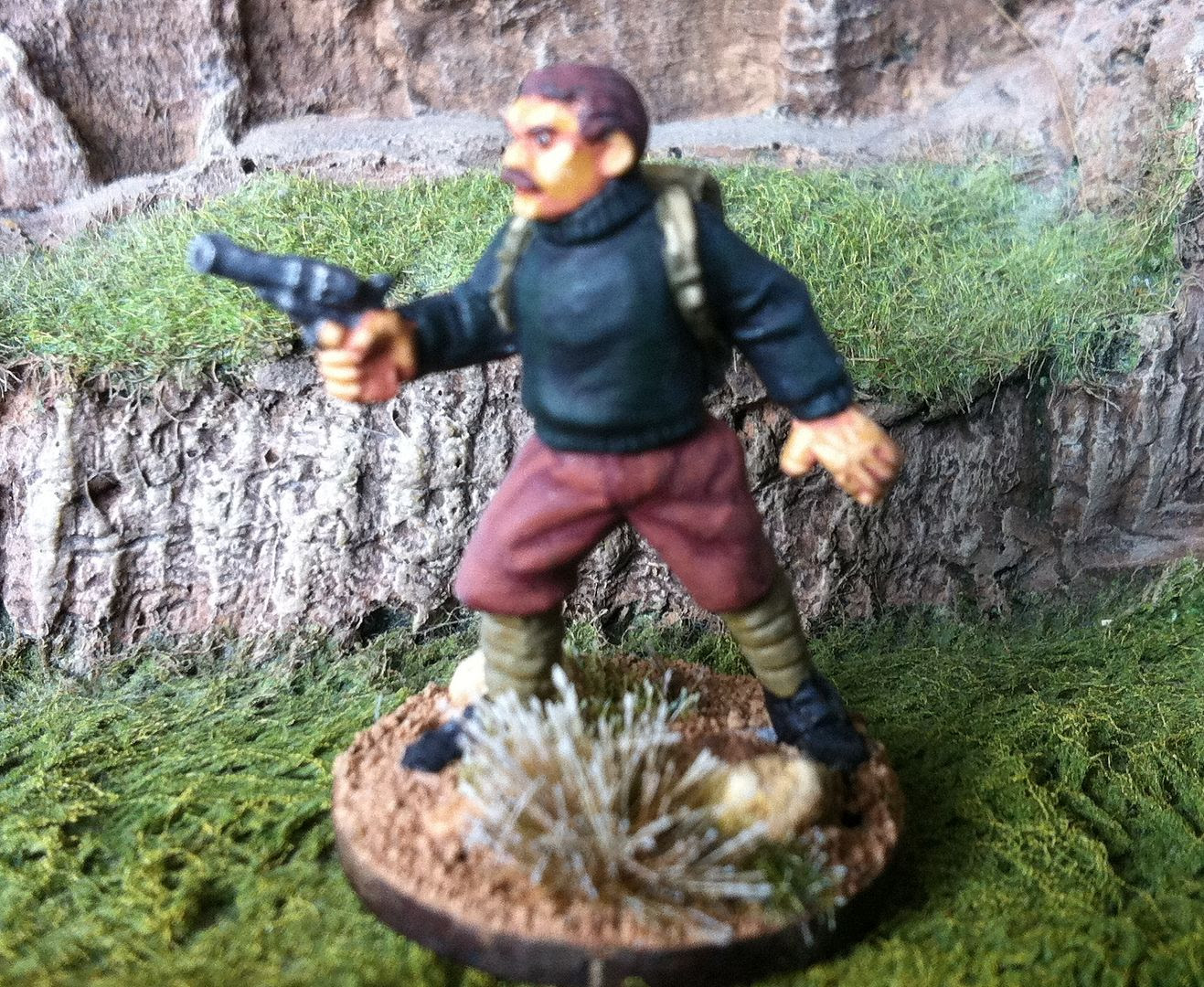 In addition, the Royal Surrey Regiment has been posted to the Rhanzlistan Field Force as of today. They are Pulp Miniatures, which I always enjoy painting as they are very 'paint friendly', which is important to we chaps of limited abilities and failing eyesight... 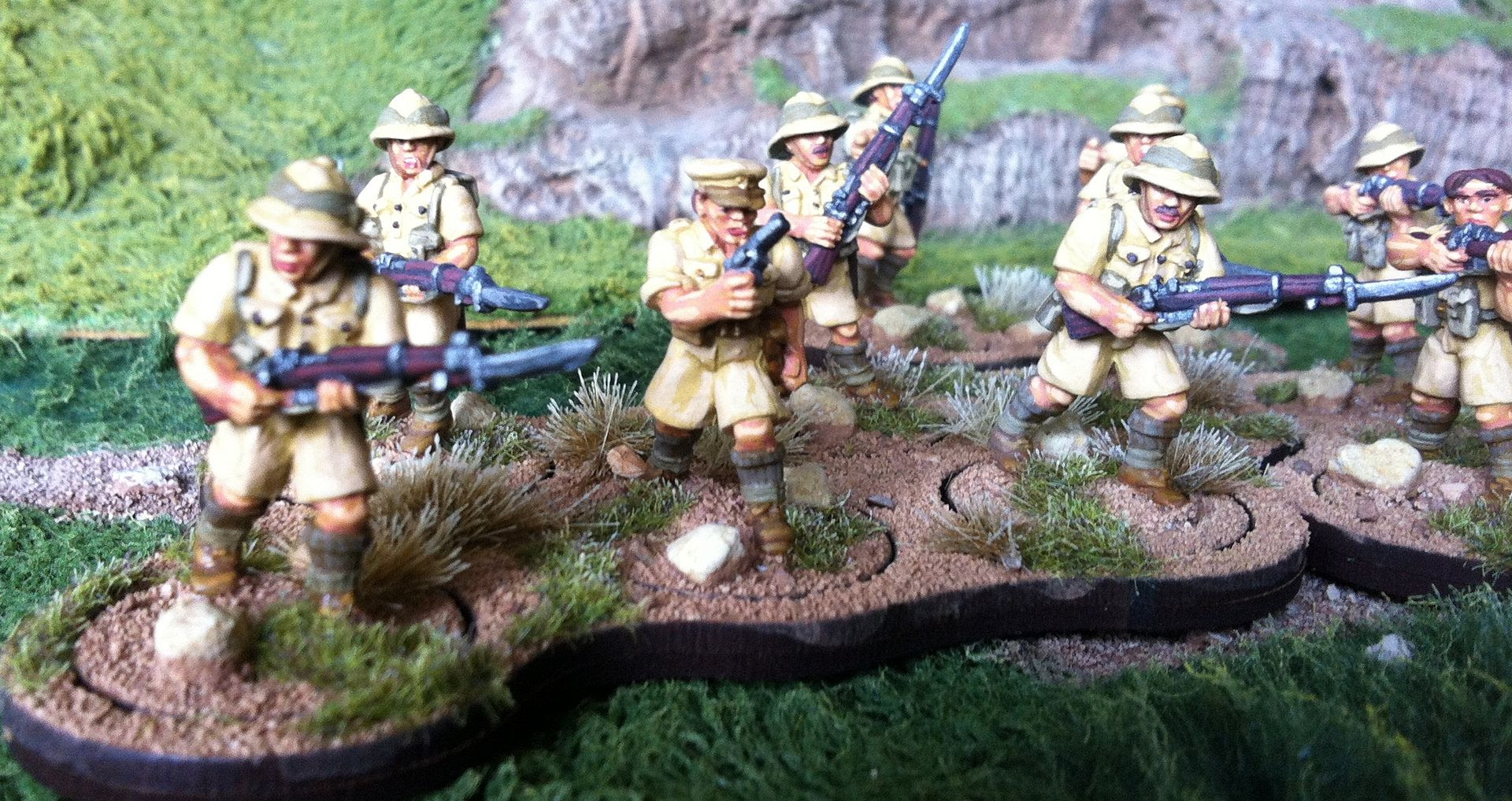 That just leaves the only cavalry unit the RFF has so far, the Shropshire Yeomanry I expect, and the Russian Mission to Rhanzlistan of course. I still need to sort out some artillery, but that will have to wait on a replenishment of funds sadly...

Email ThisBlogThis!Share to TwitterShare to FacebookShare to Pinterest
Labels: Back of Beyond, Painting, The Rhawnzlistan Field Force

Not much has happened here in GHQ for the past two weeks, mostly I have to say because I've had far better things to do entertaining our friends Pam and Chris from Adelaide and showing them the sites around and about. The highlights I think were a day out at the Black Country Living Museum, a day at Stokesay Castle in Shropshire ~ get there if you have not been ~ and a visit to Hack Green Nuclear Command Bunker in Cheshire, via the RAF Museum at Cosford ~  stark reminders for those of us of a certain age of the Cold War and its ever present threat of nuclear annihilation.
As an antidote to any lingering gloomy thoughts of nuclear Armageddon I'd like to show the one thing I did paint recently, together with some odds and ends not seen previously in the Rhanzlistan Field Force posts. First up, the Pulp Miniatures Jazz Quartet, the 'Moore's Murcheson Marvels' of the post's title. Joe Moore picked them up at Historicon for me and Dave Paddock posted them across the pond, together with some She Wolves from the same manufacturer which he'd got for me at the same convention  ~ 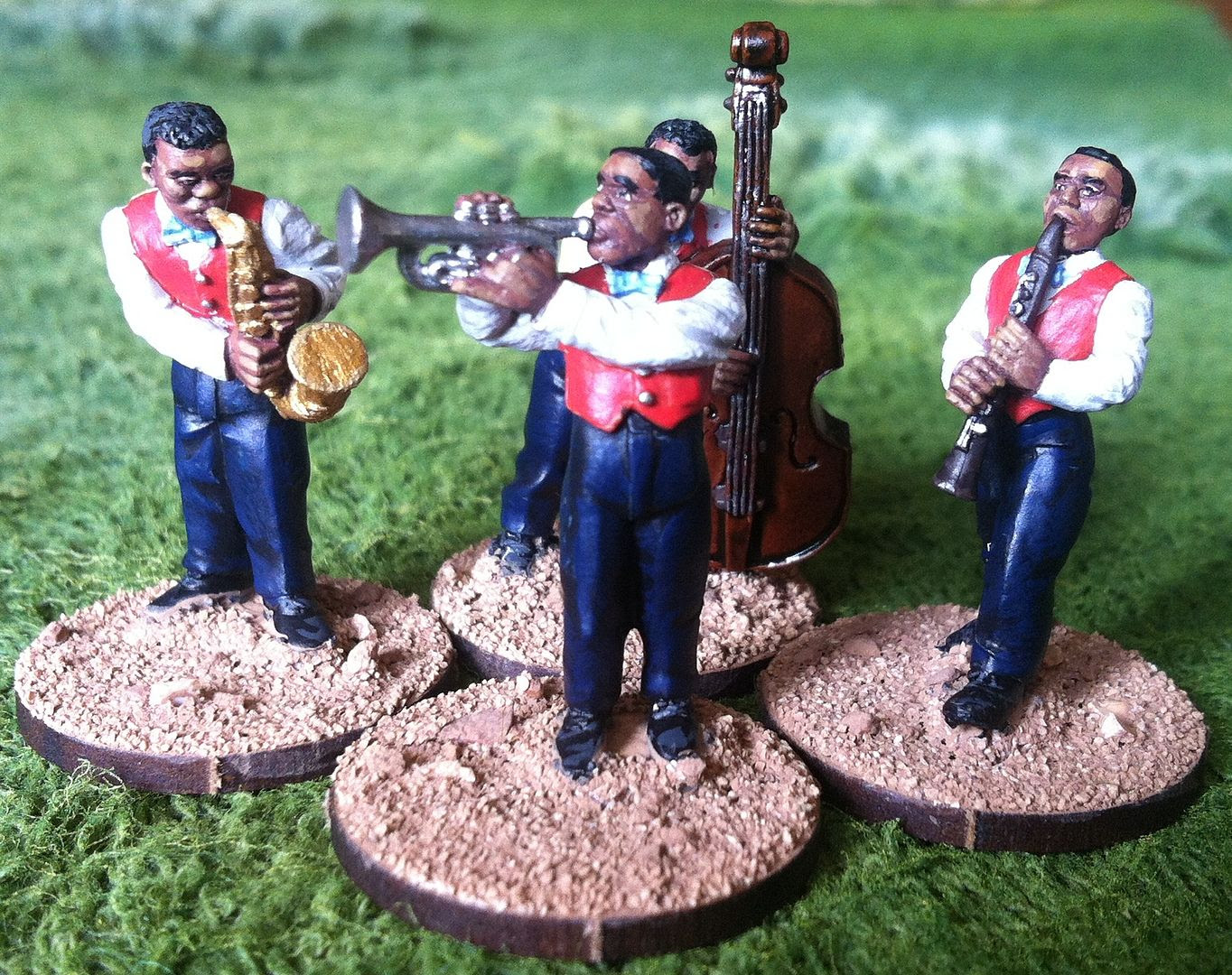 Next up, the Royal Geographical Society Expedition to Rhanzlistan, featuring Pulp Miniatures and a Copplestone figure as the Expedition leader, Major Reginald Utterly-Barrkin. The kilted figure is the former Gordon Highlander, Captain Calder, inventor of the waterproof sporran ~ 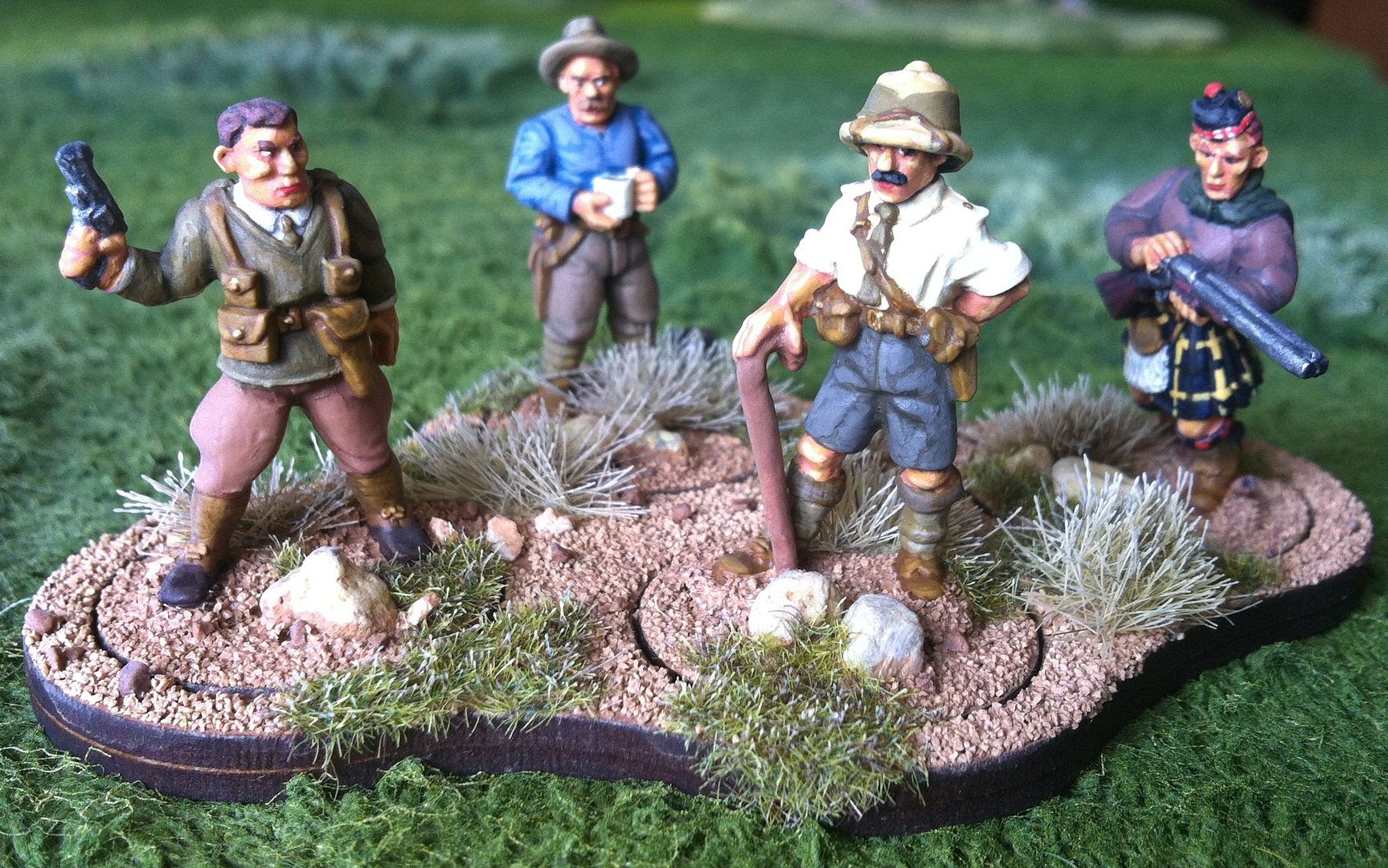 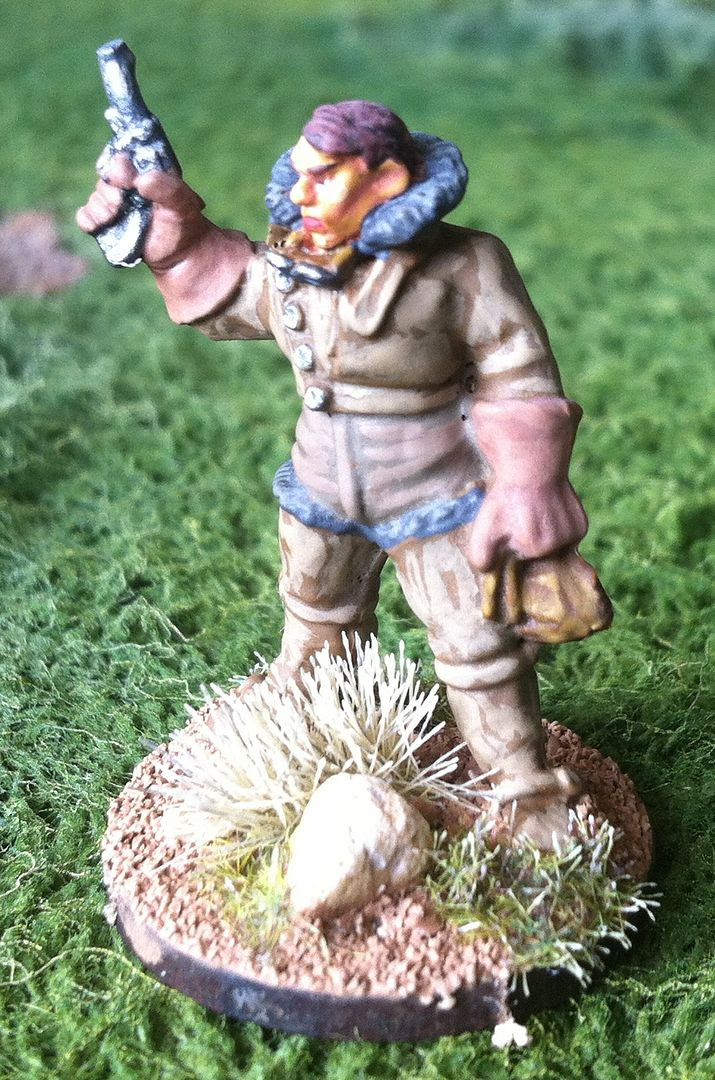 And finally, two figures from Pulp Miniatures again, the command base for the Royal Surrey Regiment. I've also finished six figures for the first base of rank and file, but the bases need texturing and the whole varnishing before you get to see them ~ 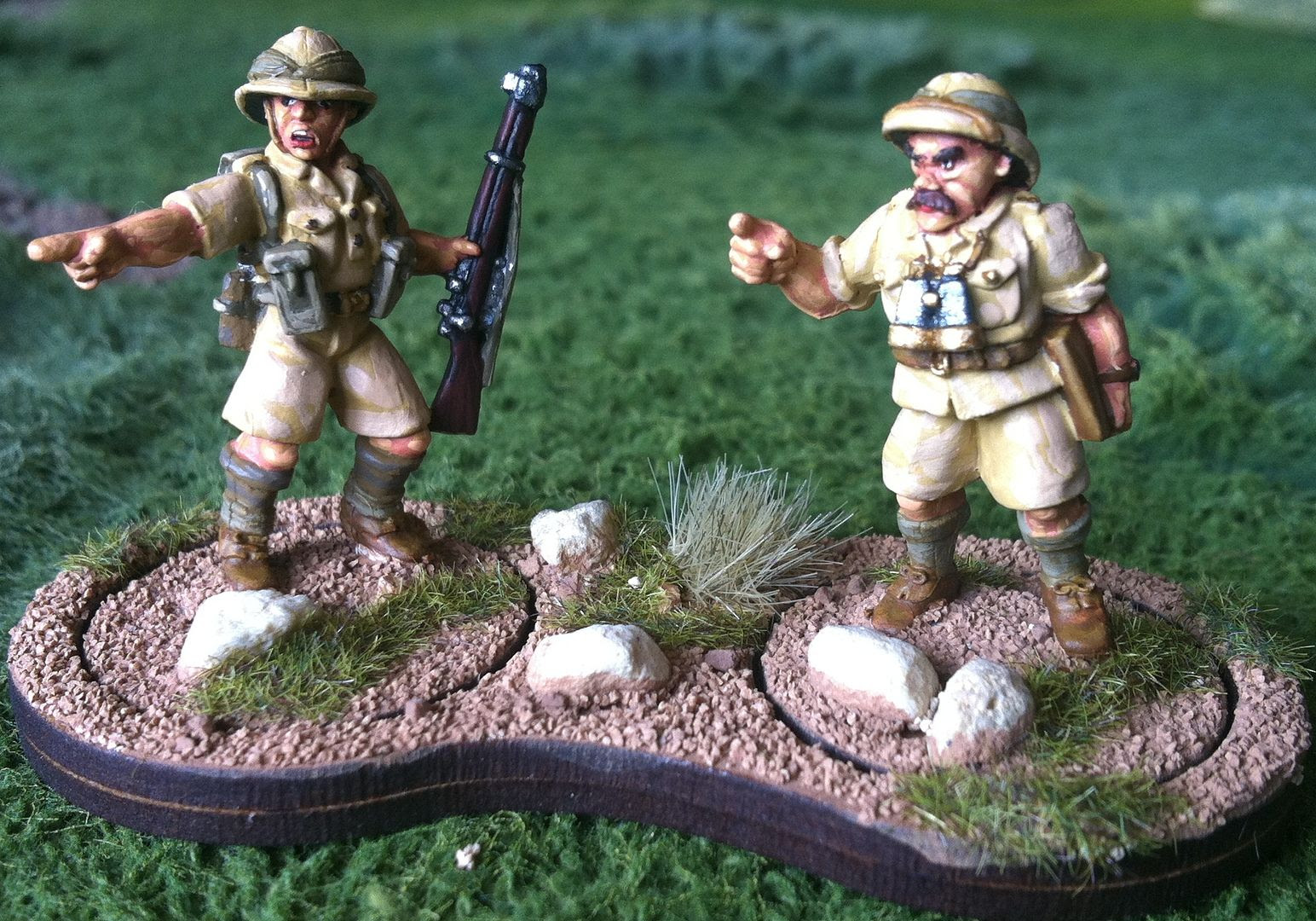 I hope to get back into the swing and finish off the RFF project before the end of September. I've got some Brigade Games British cavalry to finish and then the Russian Mission to Rhanzlistan. I still need to sort out some other cavalry, hopefully some mounted Bhurpas from Empress, and some sort of Mountain Gun ~ I like the Brigade Games one but can't really afford it just yet. Oh well....
Posted by David at 08:46 2 comments:

"Here come the Gurkhas!" The latest additions to the Rhazlistan Field Force are the Gurkhas, in this case from Copplestone Miniatures.

I found them fairly easy to paint, though the castings left something to be desired in places, with vague detail formed. I don't really like to moan about sculptors, after all I have little or no talent for the art and even less patience, but it would be nice if there were officers in the correct uniform and support weapons too, after all he managed the latter for the Indian units, albeit with only one type of NCO. 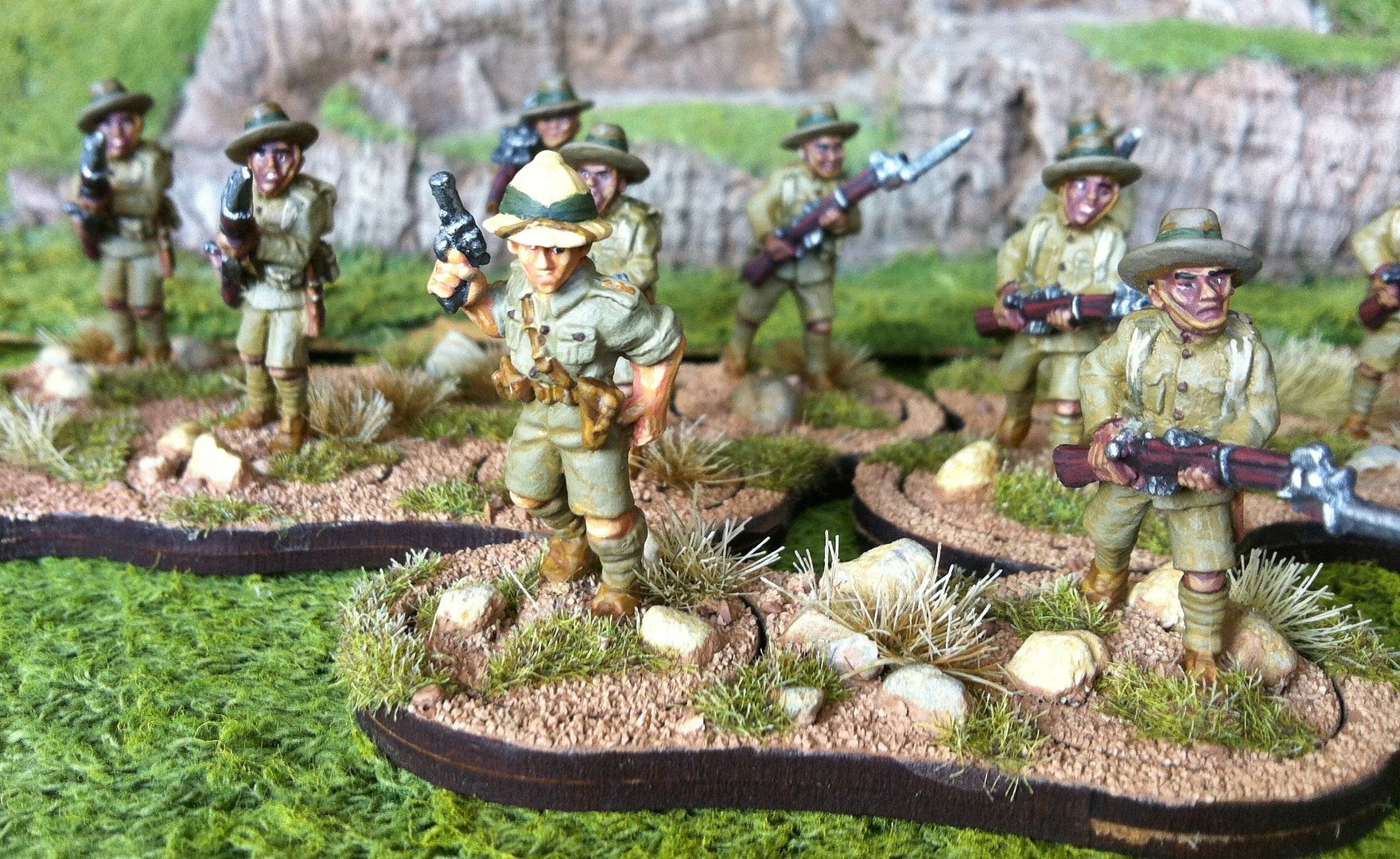 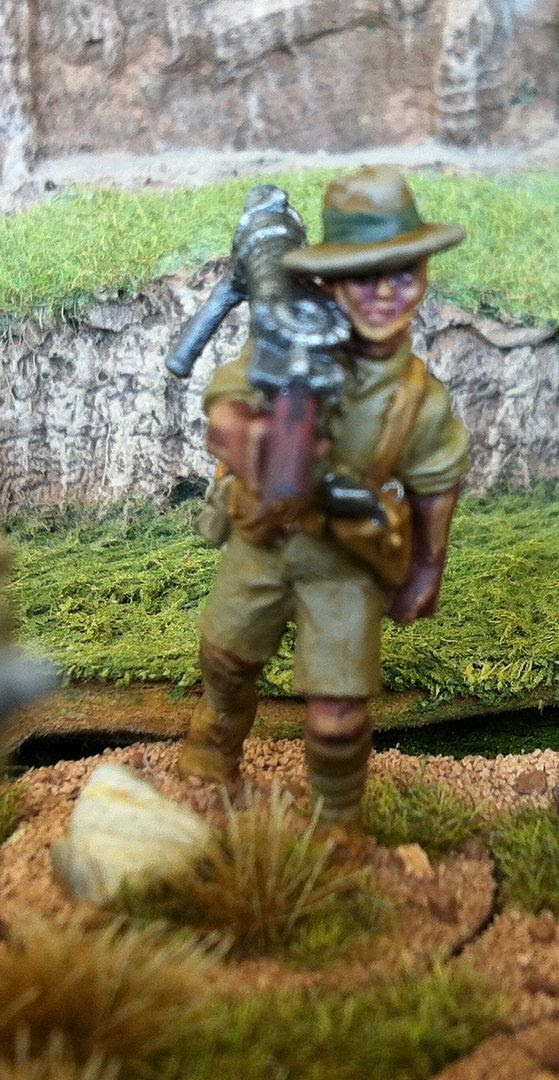 I also painted four figures for the Command Group the the force: a mixture of Copplestone, Pulp Miniatures and a Great War Miniatures dispatch rider. 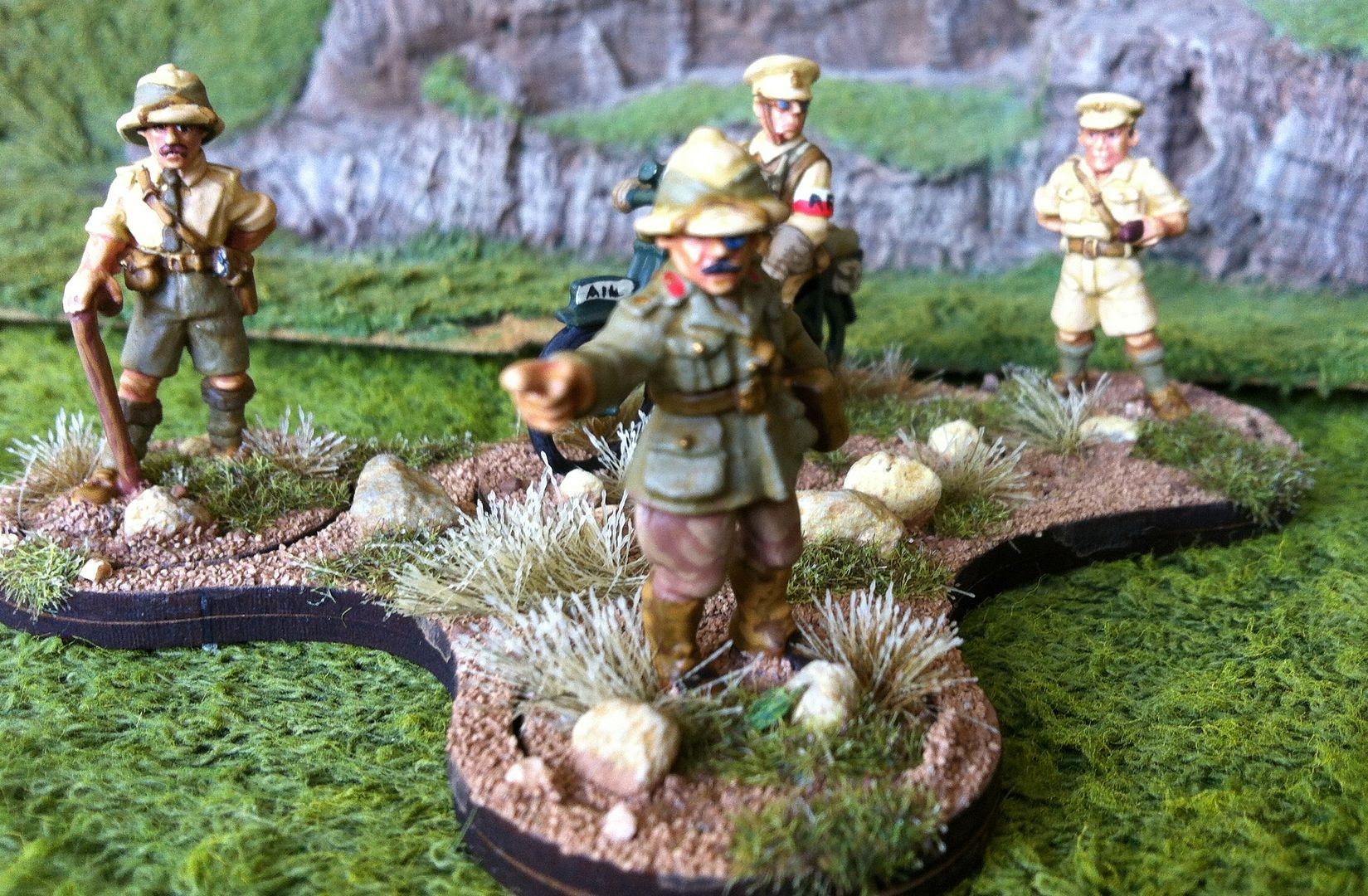 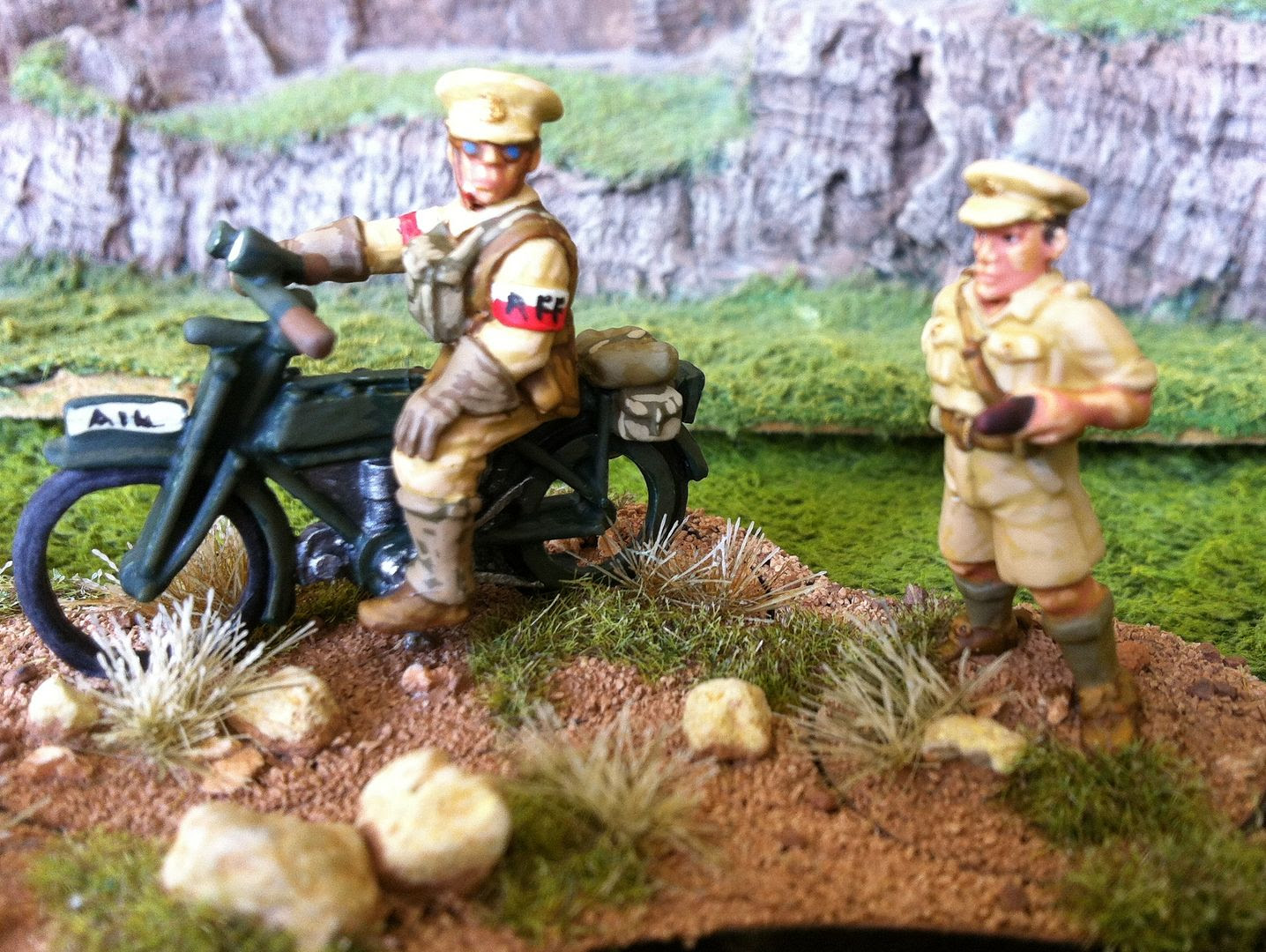 Next up on the GHQ painting station are four figures to represent the Royal Geographical Society's Expedition to Rhanzlistan, hoping to encounter the mythical Yeti or stumble on the lost kingdom of Shangri-La perhaps. But, most likely they'll just get lost and be slaughtered by some passing Bhurpas in a game... There are three Pulp Miniatures and one Copplestone in this group by the way ~ see an earlier post.

Our friends Pam and Chris from Adelaide are arriving on Friday for a stay, so don't expect anything new now until much later in the month, as real life has far more important things going on for us all now.
Posted by David at 10:08 7 comments:

Email ThisBlogThis!Share to TwitterShare to FacebookShare to Pinterest
Labels: Back of Beyond, Painting, The Rhawnzlistan Field Force
Newer Posts Older Posts Home
Subscribe to: Posts (Atom)