I've been working on a number of projects of late, usually in the early morning when its been cooler, a slightly unusual pattern due to the unexpectedly hot weather. These have included some Foundry WWII German sentries for our 1940 games, some Empress Miniatures Jazz Age Tribesmen, and some Foundry War Elephants for the Rajah of Rhawnli's Bodyguard unit for our Indian Mutiny games.
Firstly the Rajah's Elephant Guard. Phil painted the elephants and the mahouts, leaving me to paint the warrior crew. I got these ages ago from one of the now sadly defunct £5.00 baskets at an Open Day. I would not have bought them at the full price, but these were too good to miss. 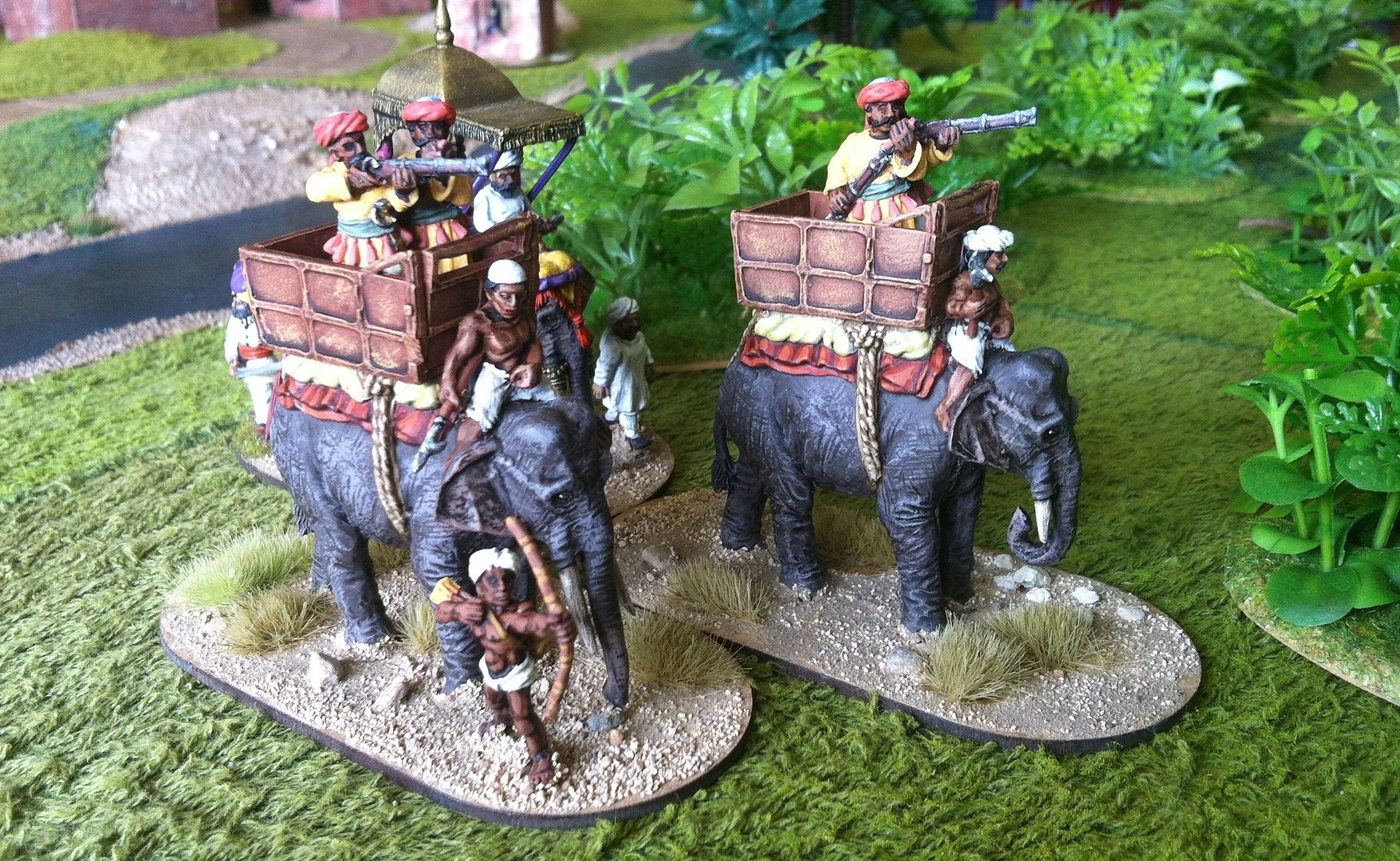 Here the elephants get their first taste of action in a recent game staged on my table here in GHQ.
I came a gallant second in turn 12 when the Rajah's Elephant guard finally broke and the army of the HEIC swarmed over the bridge of boats... 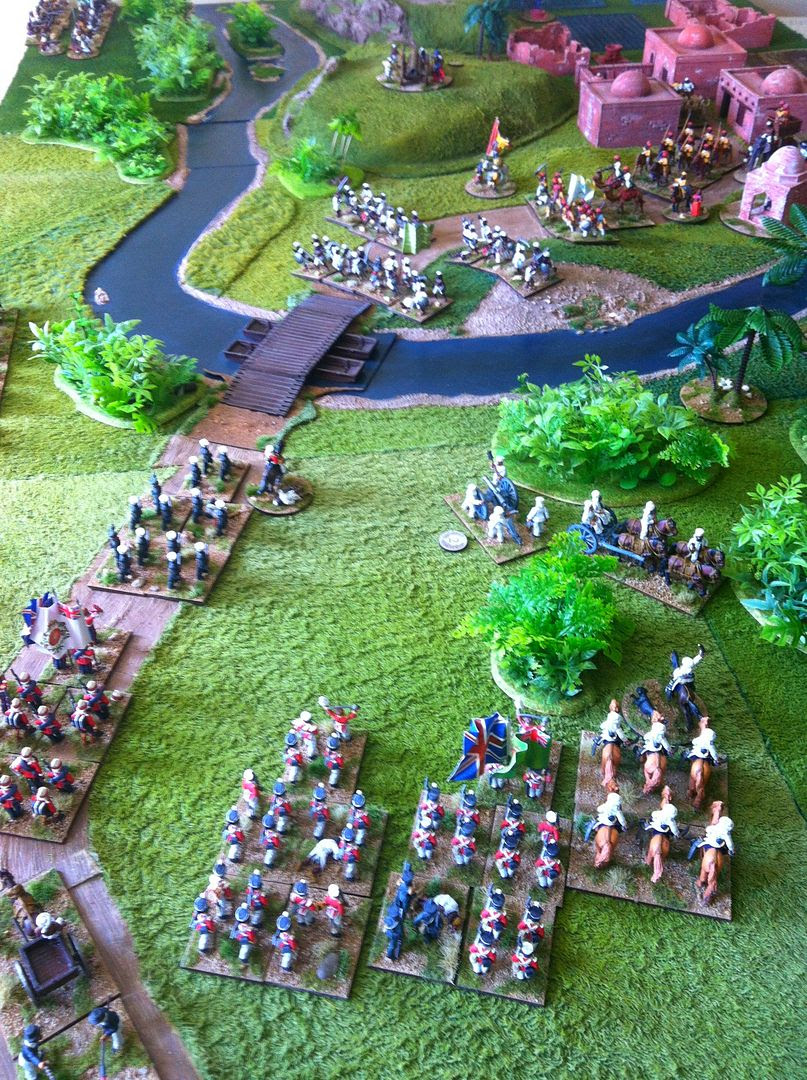 The Empress Jazz Age Tribesmen are for my Rhawnzlistan Field Force games. They are lovely figures, mostly with separate heads, meaning you can vary and characterise your force; something I value after wading through my first Copplestone unit of largely cloned figures. On the down side, they are complicated to paint compared to the Foundry tribesmen. 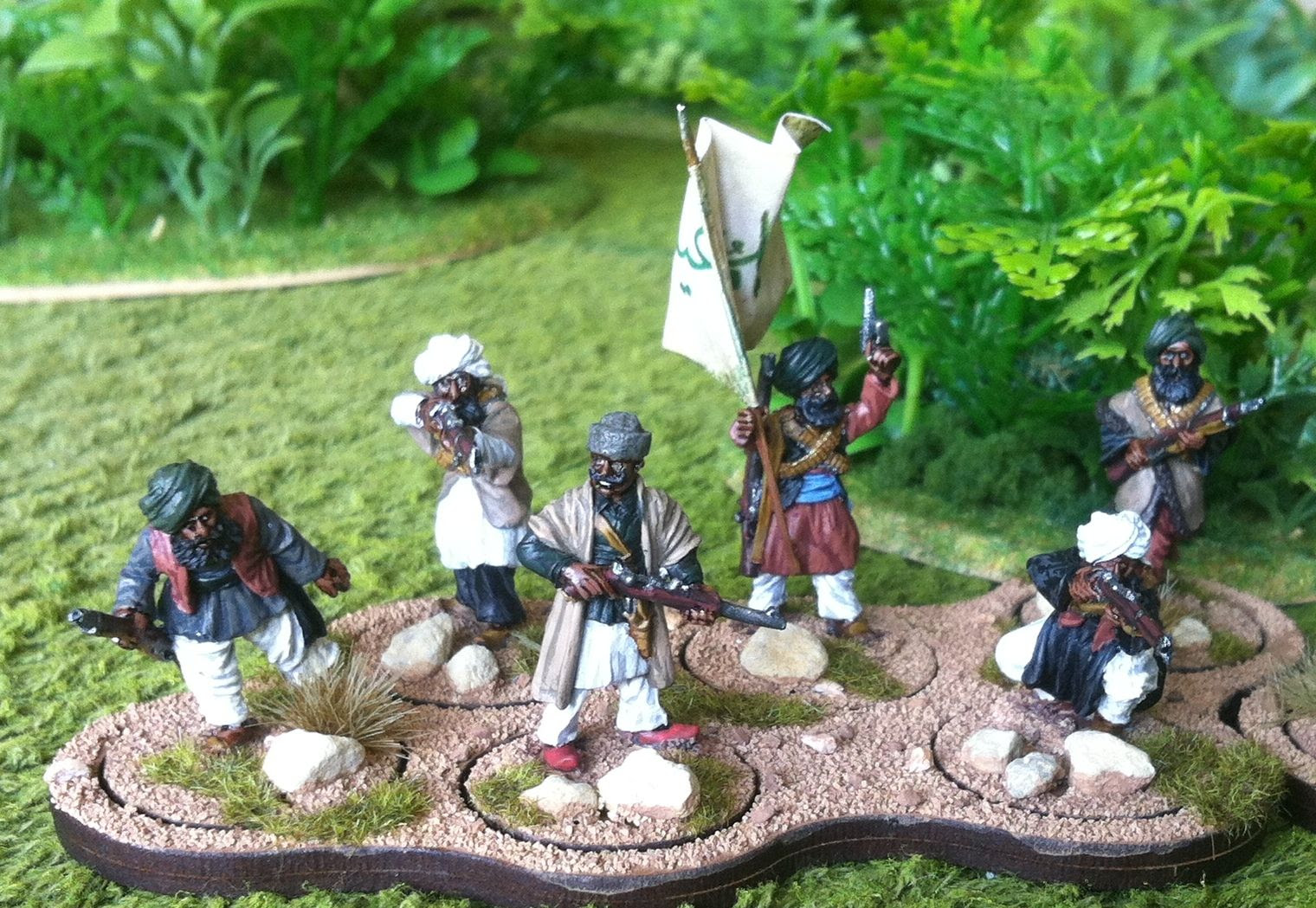 I have five more figures on my desk to finish off, although I may buy a couple of more packs in the Autumn to swell the ranks, along with the rather nice mounted ones they have brought out recently. Funds are a bit tight here in GHQ at the present, largely due to preordering a large number of Trent Miniatures Revolutionary Wars figures for my 2014 project!
Posted by David at 09:34 4 comments:

Tales from the Sub Continent

"God, Carruthers, is there no end to the heat, the blasted flies, those damned Bhurpas?"
Well, no, not really. Instead, just a brief update on my very limited progress with my Back of Beyond project, the Rhawnzlistan Field Force, which I previewed in an earlier blog post while they were all in their pristine white undercoat stage. Despite the hot weather meaning that GHQ is often too warn for painting after about 10.00 a.m. I have something to show for the project.
Firstly, the South Staffords take the field, as they do in most of my armies. They are Copplestone Castings figures which proved easier to paint than I had thought before I applied the first brush full~ 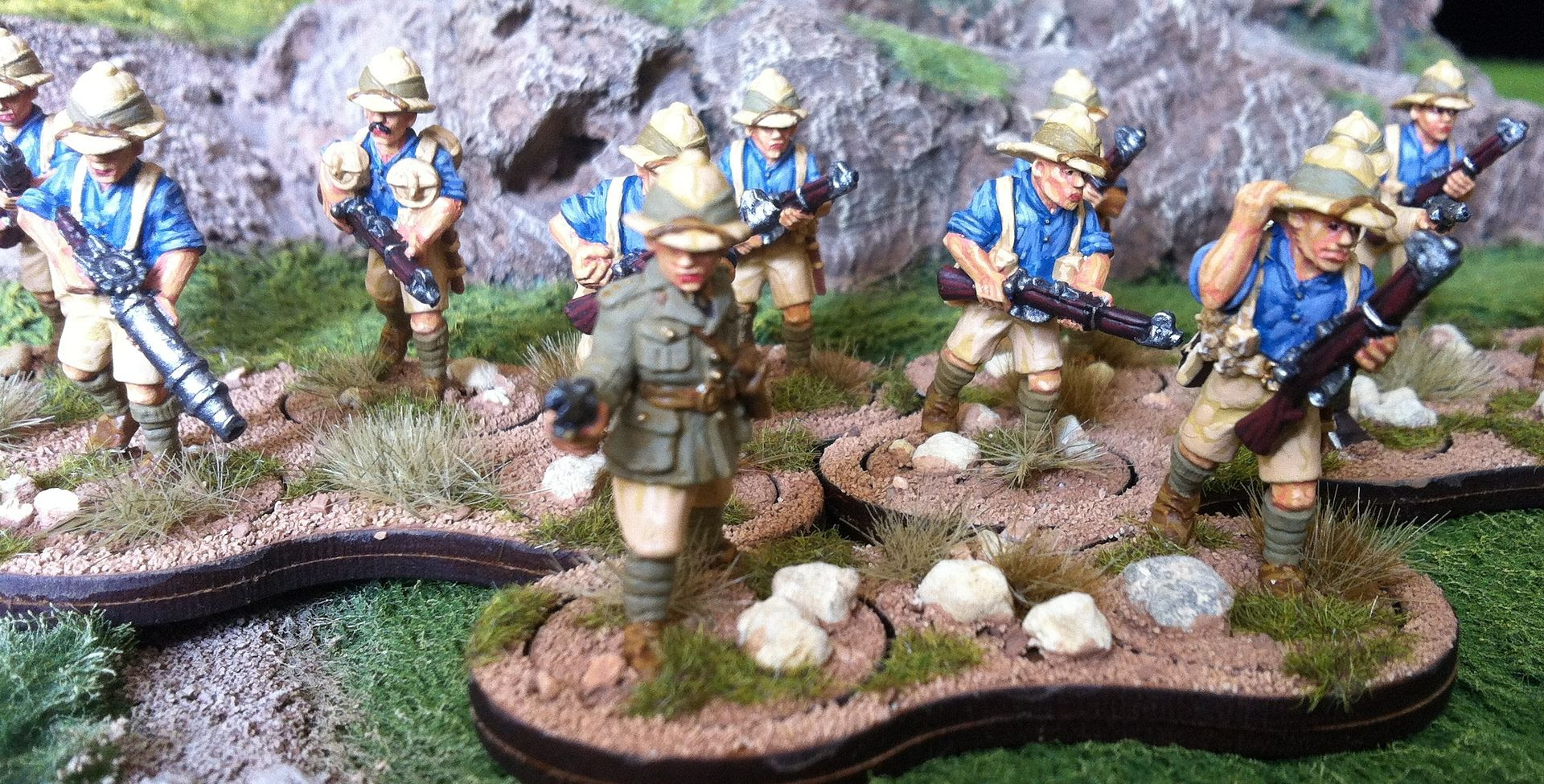 A couple of machine guns and a spotter, all Copplestone Castings figures again ~

A Rolls Royce armoured car, probably by HLBS, but I've had it so long I can't really be sure ~ 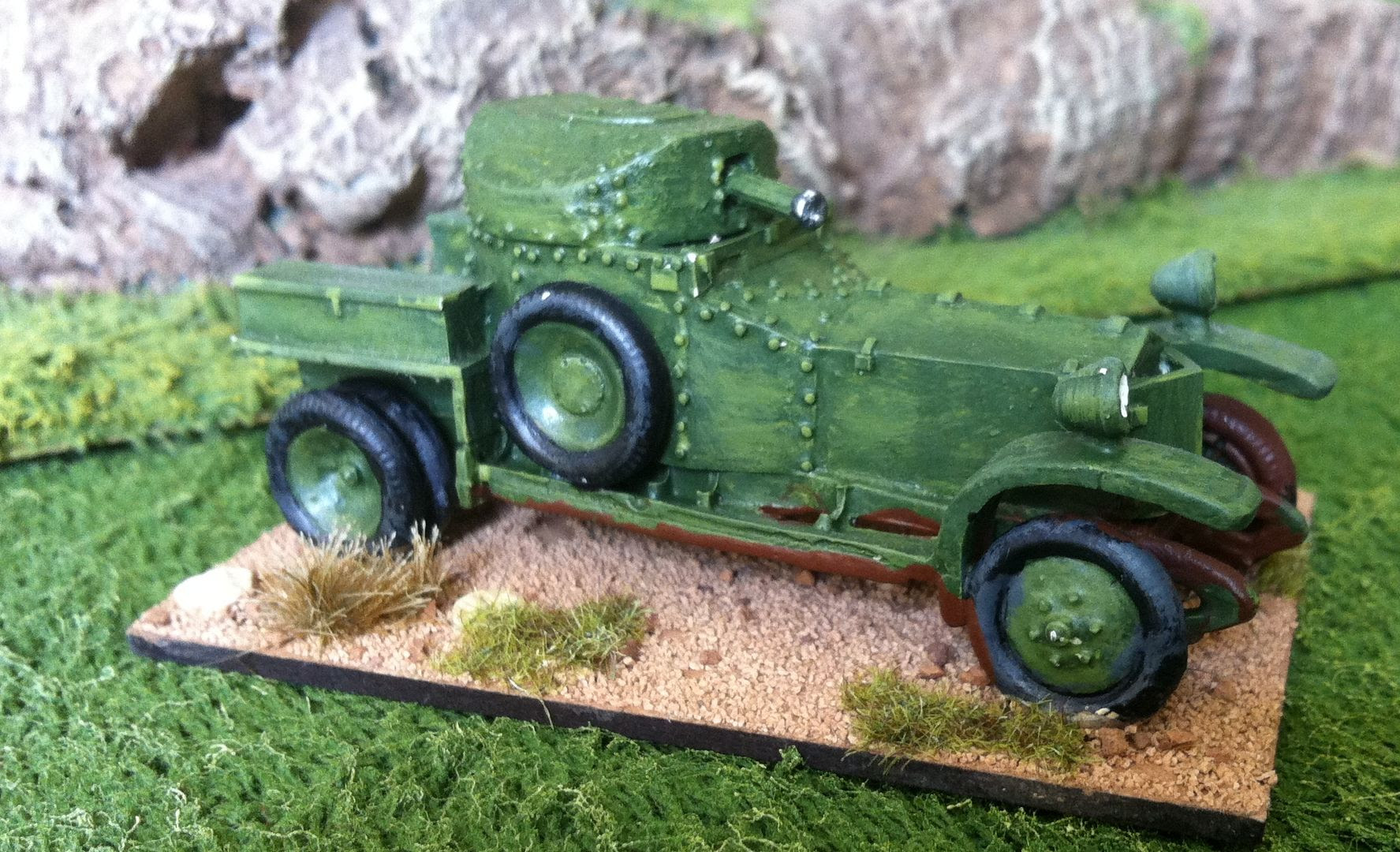 The Diplomatic Corps and a young Prince, the true heir to the throne of Rhawnzlistan. The figures are all from Pulp Miniatures ~ 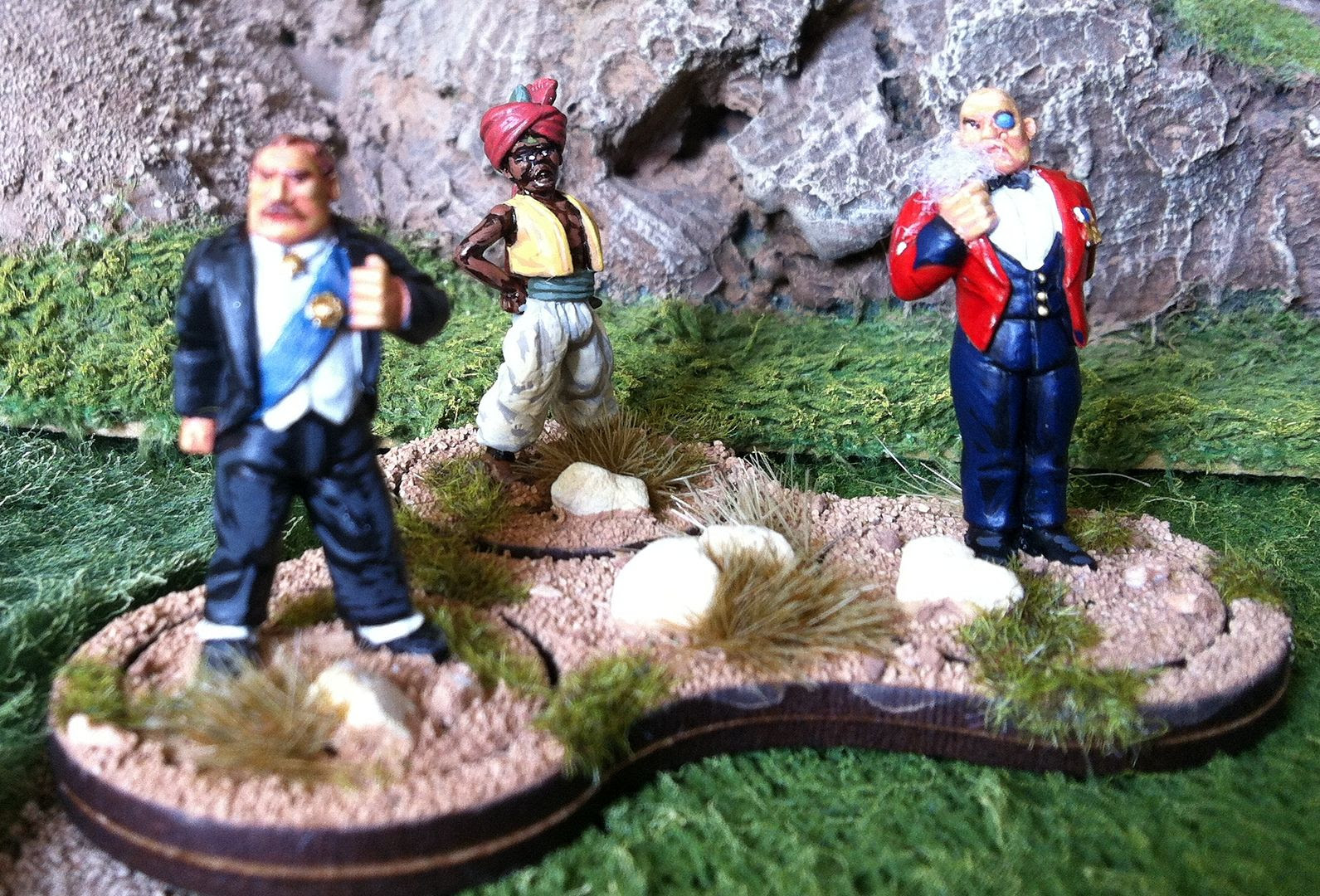 The first of the 'loyal' tribe of Bhurpas. Empress Miniatures Jazz Age figures ~ 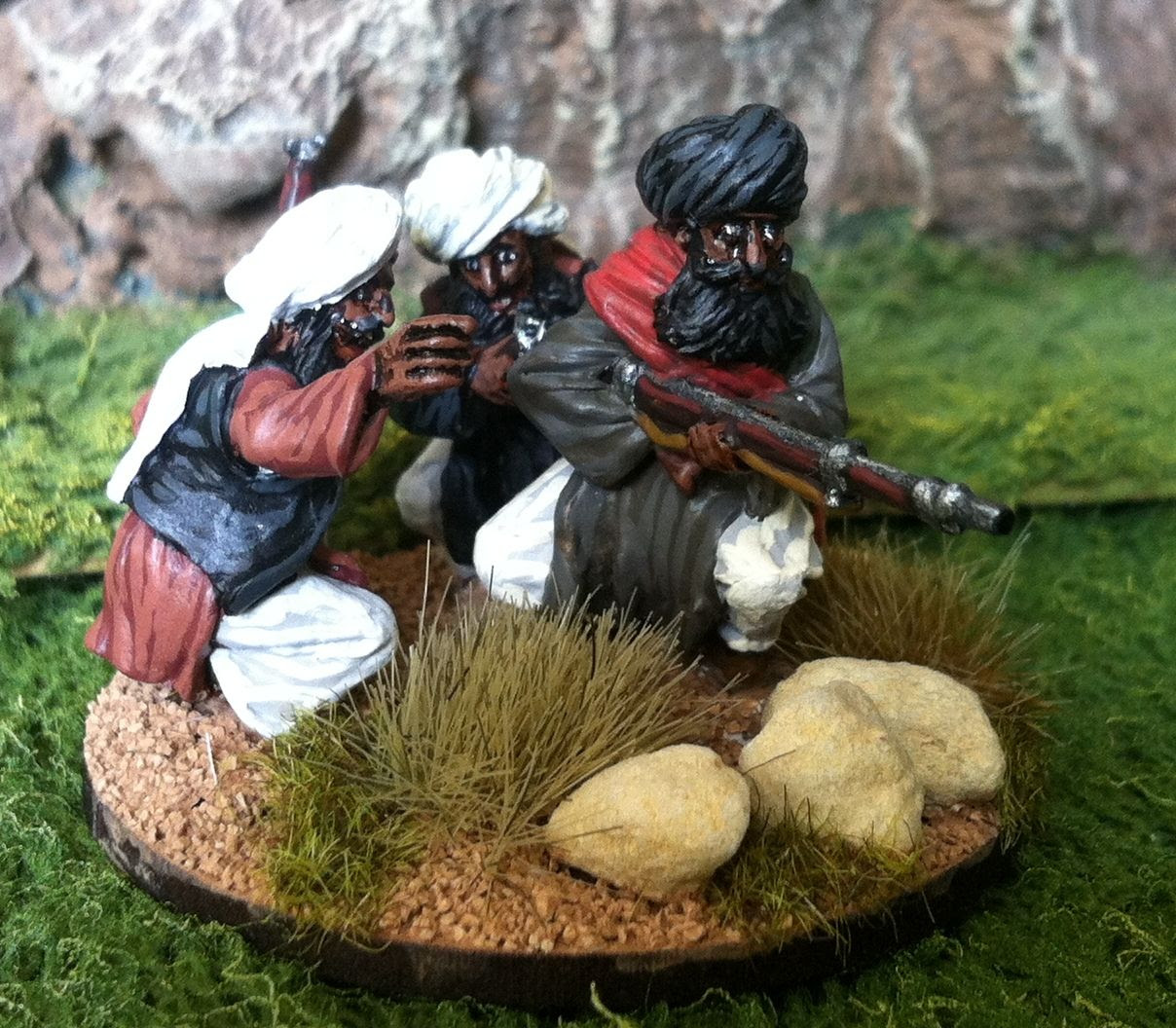 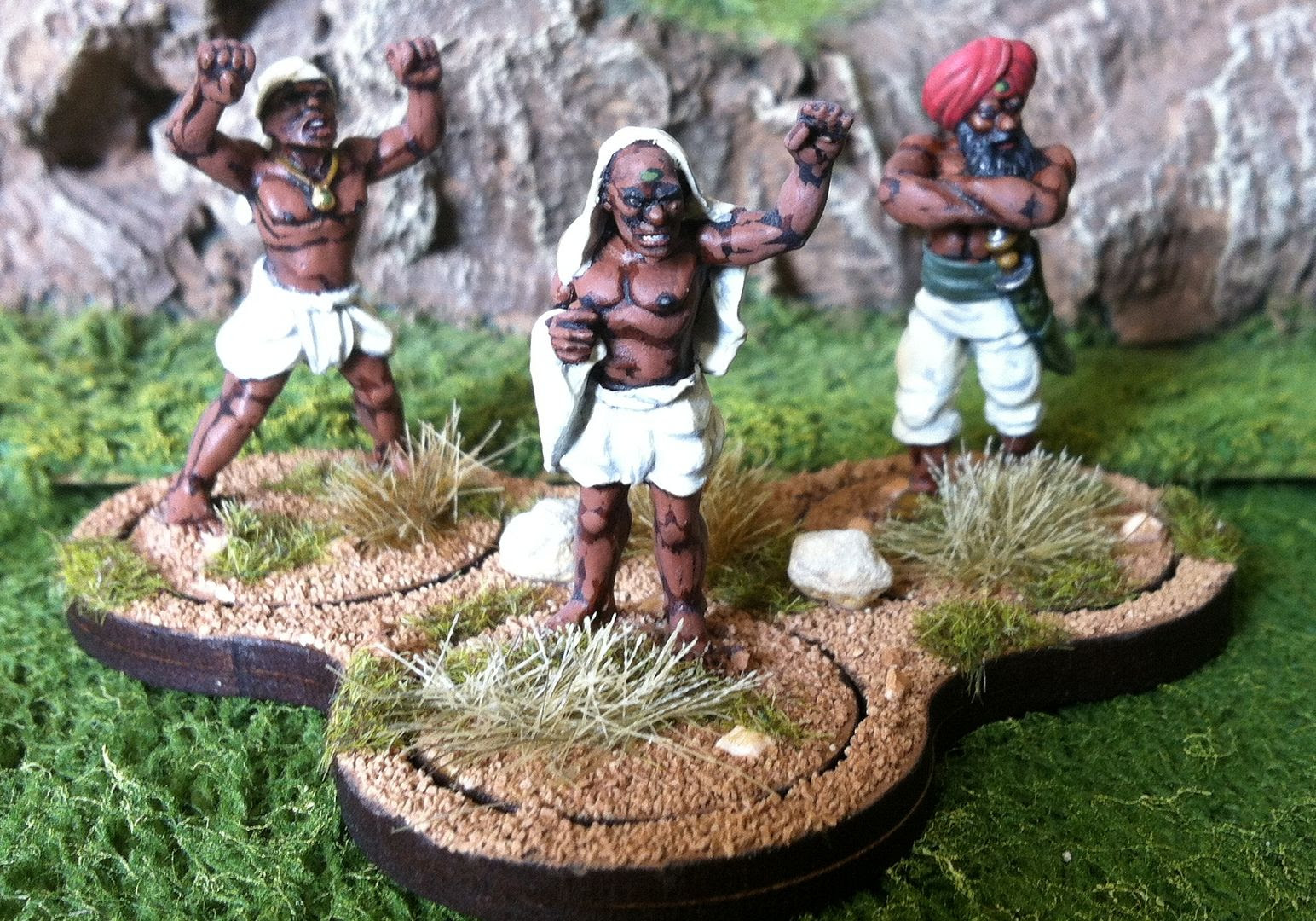 The movement trays are all from Warbases, whose service and product I heartily recommend to you! The texturing are all hobby products aimed at model railway enthusiasts and bought from Hobbycraft. The tufts are from Mininatur which are stocked by Mutineer amongst others. I'm working on more Bhurpas at the moment, as well as the free Warlord Japanese figure and some Foundry German sentries for 1940 games.
Posted by David at 06:28 4 comments:

The Ruined Temple of Pa-Doh-Ki

Recently Phil and I took advantage of some free time to play out another Bolt Action WWII game, set in Burma at Phil's request: I think he wanted to blood my minuscule Japanese tankette... People should be careful what they wish for though. 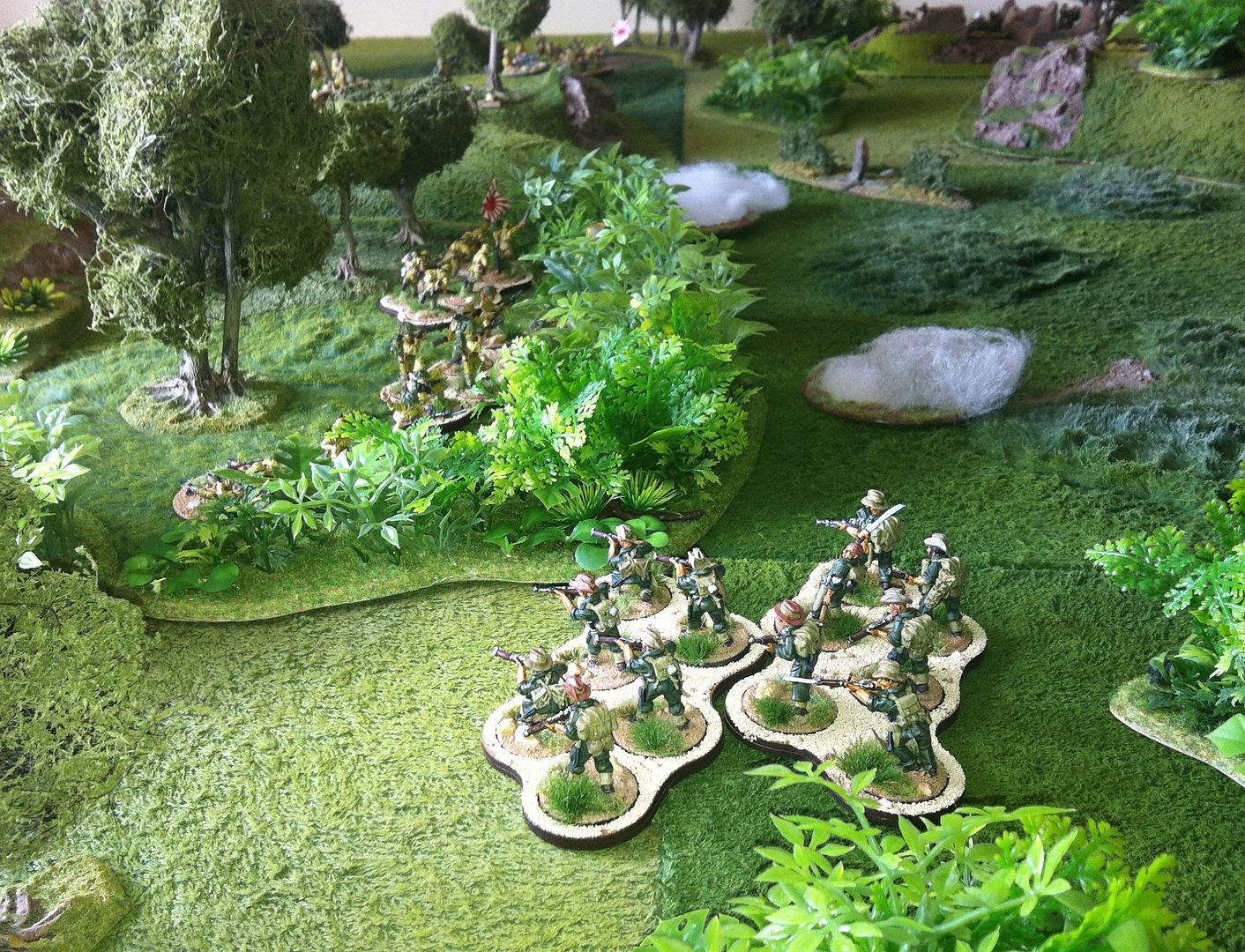 The first picture picks up the action in Turn 3.One of my two large Japanese squads was in good cover, ready to burst forth at the turn of the dice. The tankette is cunningly concealed at this point on a path through the jungle terrain piece. Drawing the dice can be so cruel in Bolt Action games I've observed... 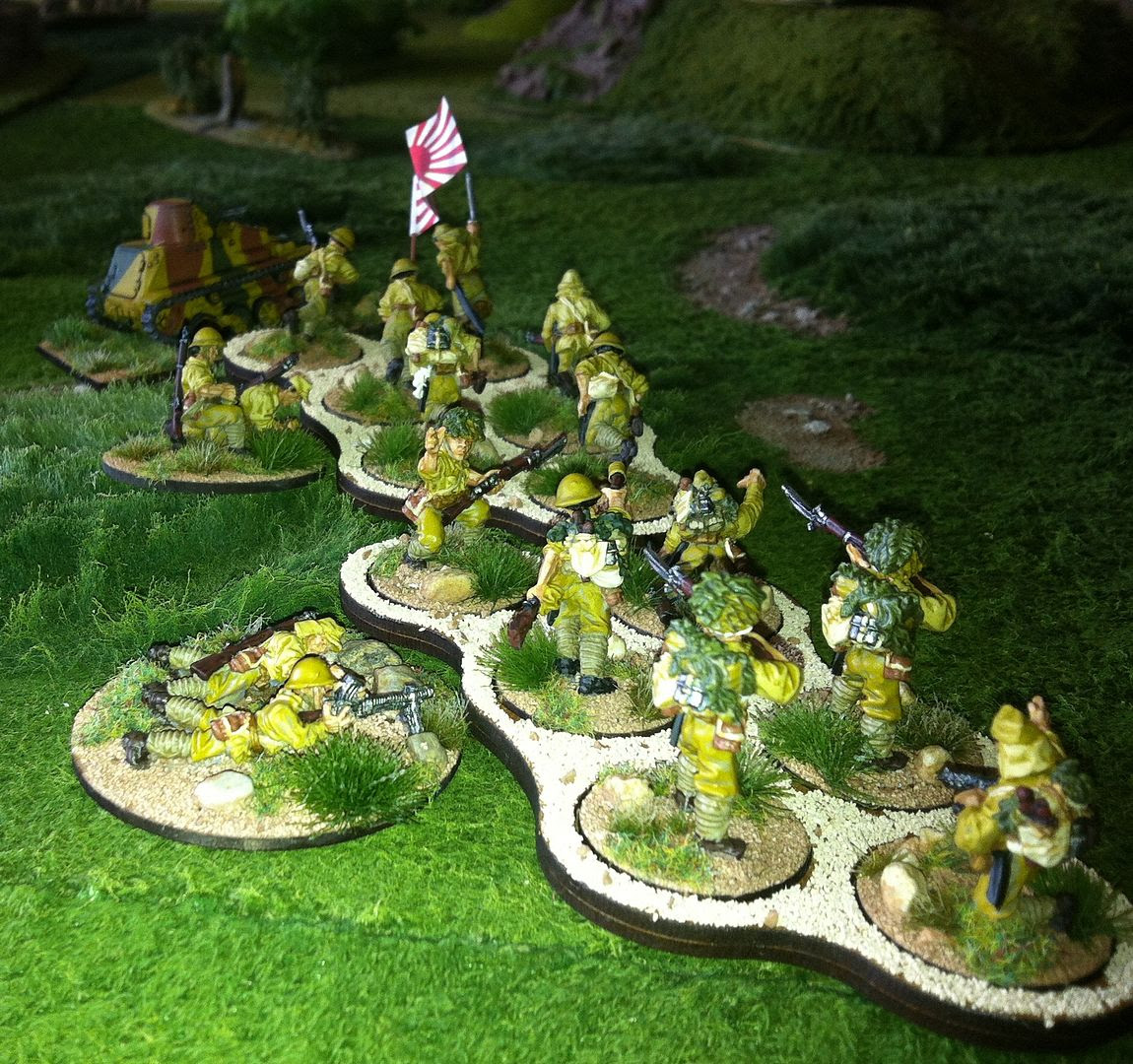 The tankette, supported by one squad, burst out of cover and utterly destroyed the Chindit squad opposing it. Banzai!!!!!!!! Meanwhile, favourable dice had allowed the attack to develop on the left, putting the third Chindit squad in a spot, pinned down in the ruins of the temple... 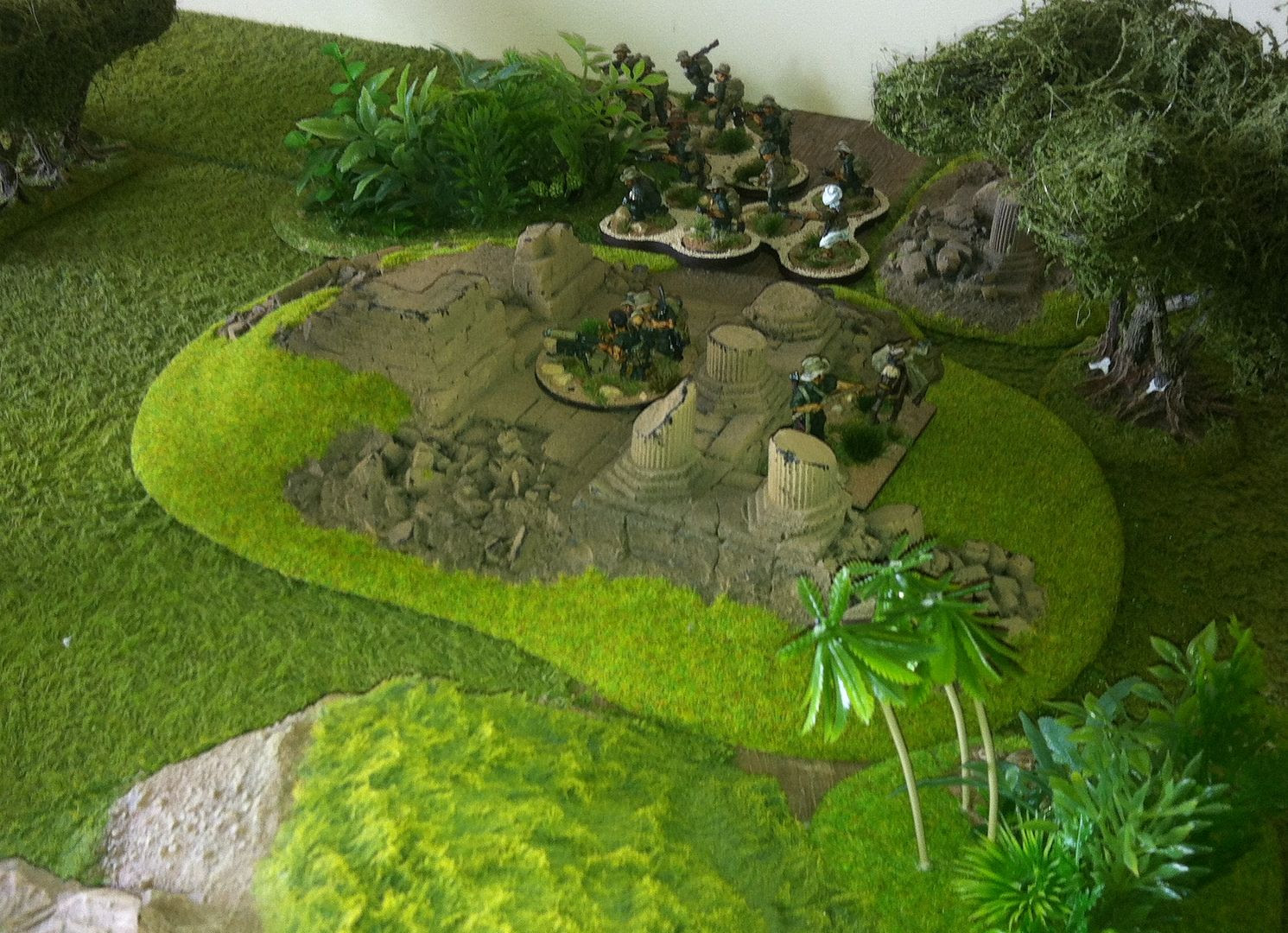 The Chindit machine gun rattled away throughout the game, but without much notable success we thought...

The second Japanese squad, facing the temple ruins, effectively blocked the Chindit flanking attack, only sustaining one casualty and two pin markers all game, despite the constant machine gun and occasional mortar fire. Was the tankette bloodied? Well, yes; but not in the way Phil had anticipated. Led by Lieutenant Onomoro, the forces of His Imperial Majesty had routed the foreign devils convincingly! Banzai!!! Banzai!!!!! Banzai!!!!!
Posted by David at 08:56 5 comments:

As its 4th July it seemed appropriate to put up a photo report of a recent AWI game here in GHQ. Jon commanded the forces in rebellion against the Crown, while I commanded the forces loyal to King George! The rules used were the excellent and flexible Black Powder, the figures and terrain from my own collection. The figures are mainly Front Rank, supplemented by a few Perry Miniatures and some Dixon Miniatures. The buildings are all scratch built by myself and Phil, while the trees, hedges and fields are from The Last Valley. 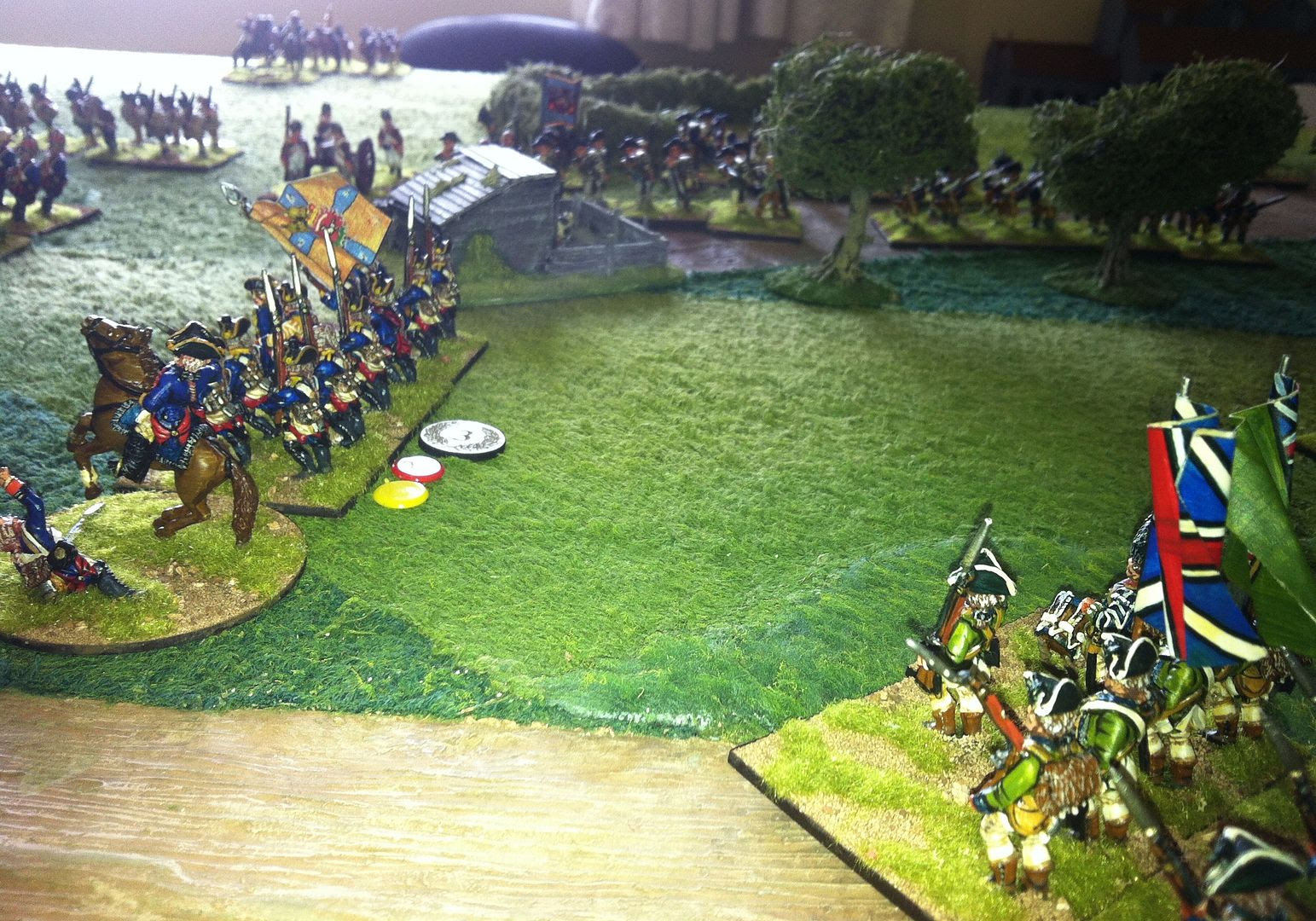 The British forces consisted mainly of Hessians and Loyalists, supported by one battery of guns from the Royal Artillery. The Hessians began the game encamped around a small cluster of buildings, while the Loyalists were not due to enter the table until after turn four. The American forces were handicapped at the outset of the game by particularly inept commanders, rated at 7 and 6, who would be replaced by Congress after turn seven with more savy leaders. While failing to issue orders in turn two, Jon twice blundered on Brigade Orders, resulting in three bounds of advance from each brigade! The Hessians were woken by the sound of marching feet right on their doorstep. 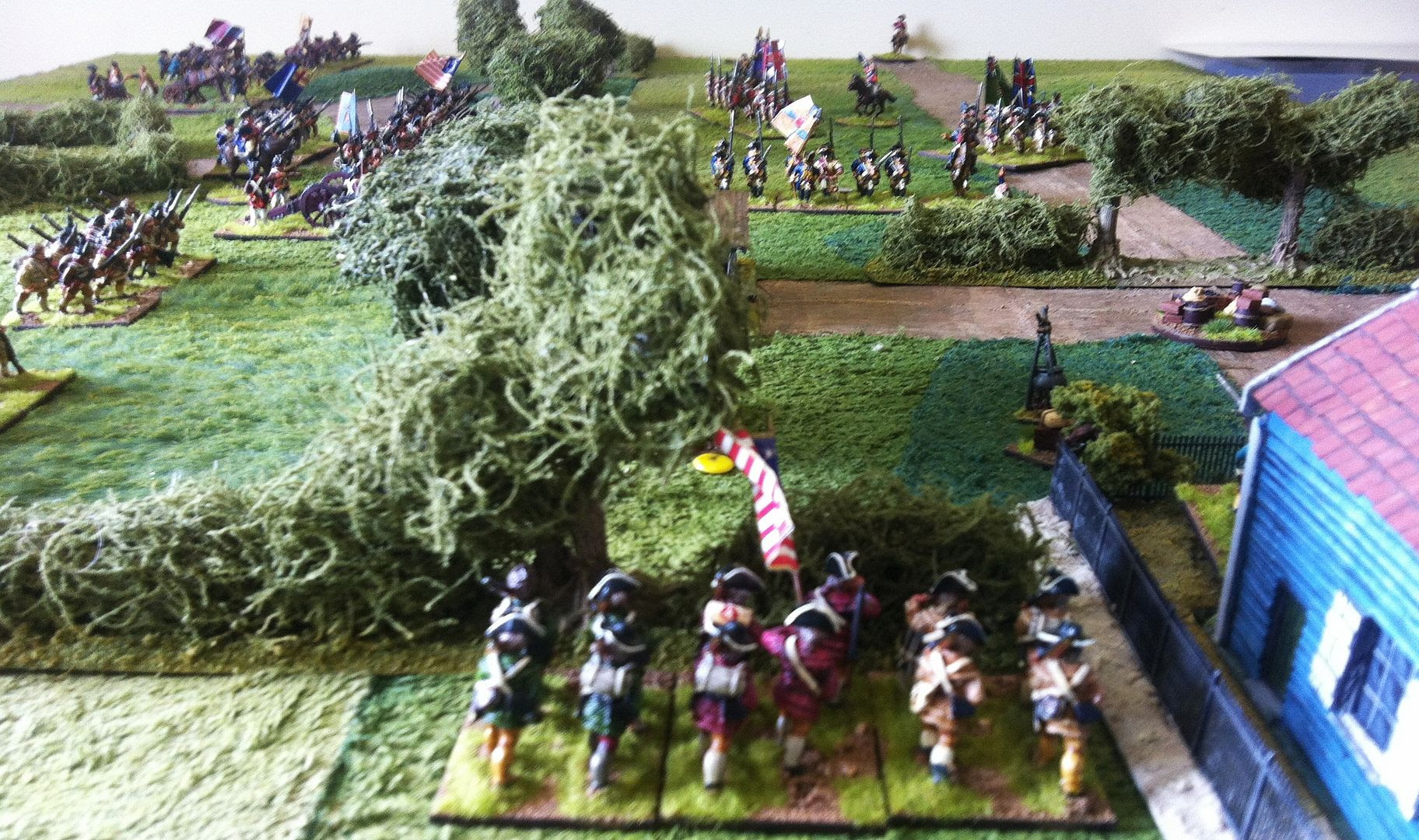 Fierce fighting developed around the various buildings, with the Hessians eventually being ejected from the larger of the houses, the Moore House, but holding on doggedly to other smaller buildings.

The Rebels drove forward at every opportunity, while the Hessians and Loyalists struggled to beat off repeated attacks. While several units were halted or repulsed, the weight of numbers finally began to tell.

While by now both Loyalist Brigades were on the table they found themselves attacked in the flank as they struggled to deploy, further constrained by the remaining Hessian units being driven back onto their brigades.

Finally ejected from their hold on the last remaining buildings, the Hessian brigade's morale broke and they melted away from the fight. The remaining Loyalist commanders could probably see that it was all up with the battle now... 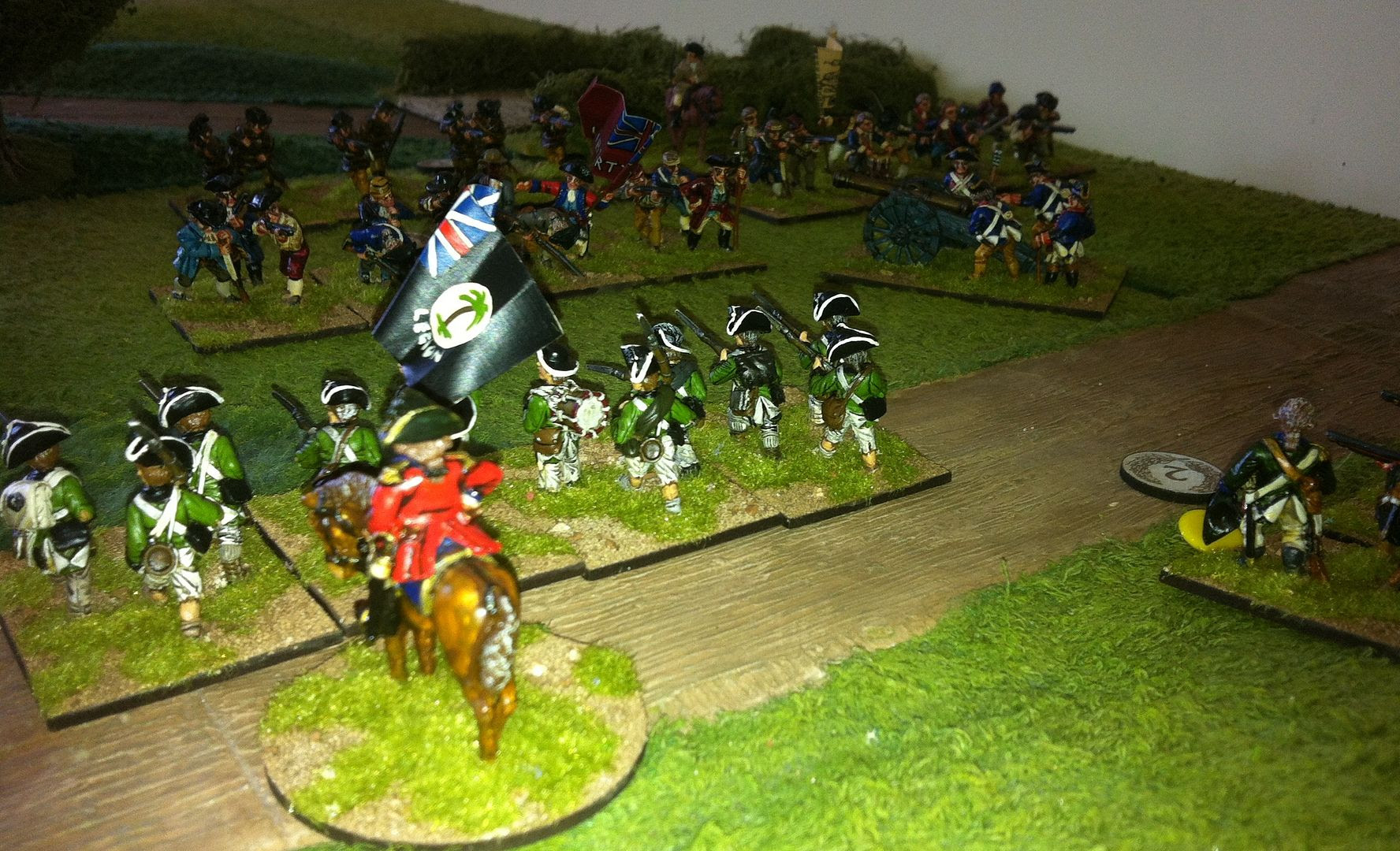 Despite retaining good order and discipline, the Loyalists can see that they will be overwhelmed, with both Flanks threatened and in danger of being turned. General Archibald Bykleigh reluctantly orders a withdrawal for the army, leaving the field to the Rebels...
All in all a great game. Played out over twelve turns with a clear result. Although the British Loyalists were beaten, they were not destroyed: they will regroup and fight another day I'm sure!