Odds & Sods To End The Month

As another month draws to a close and the year is already half way done I find I have just a few odd figures finished which I’ve not shared with anyone as yet. So, first off four Mutton Chop 1938-40 British Infantry, mainly for my VBCW games but also for deployment in our ongoing Blandings/Operation Zeelowe Games. Two officers first, then an Anti -Tank Rifle team of two men ~ 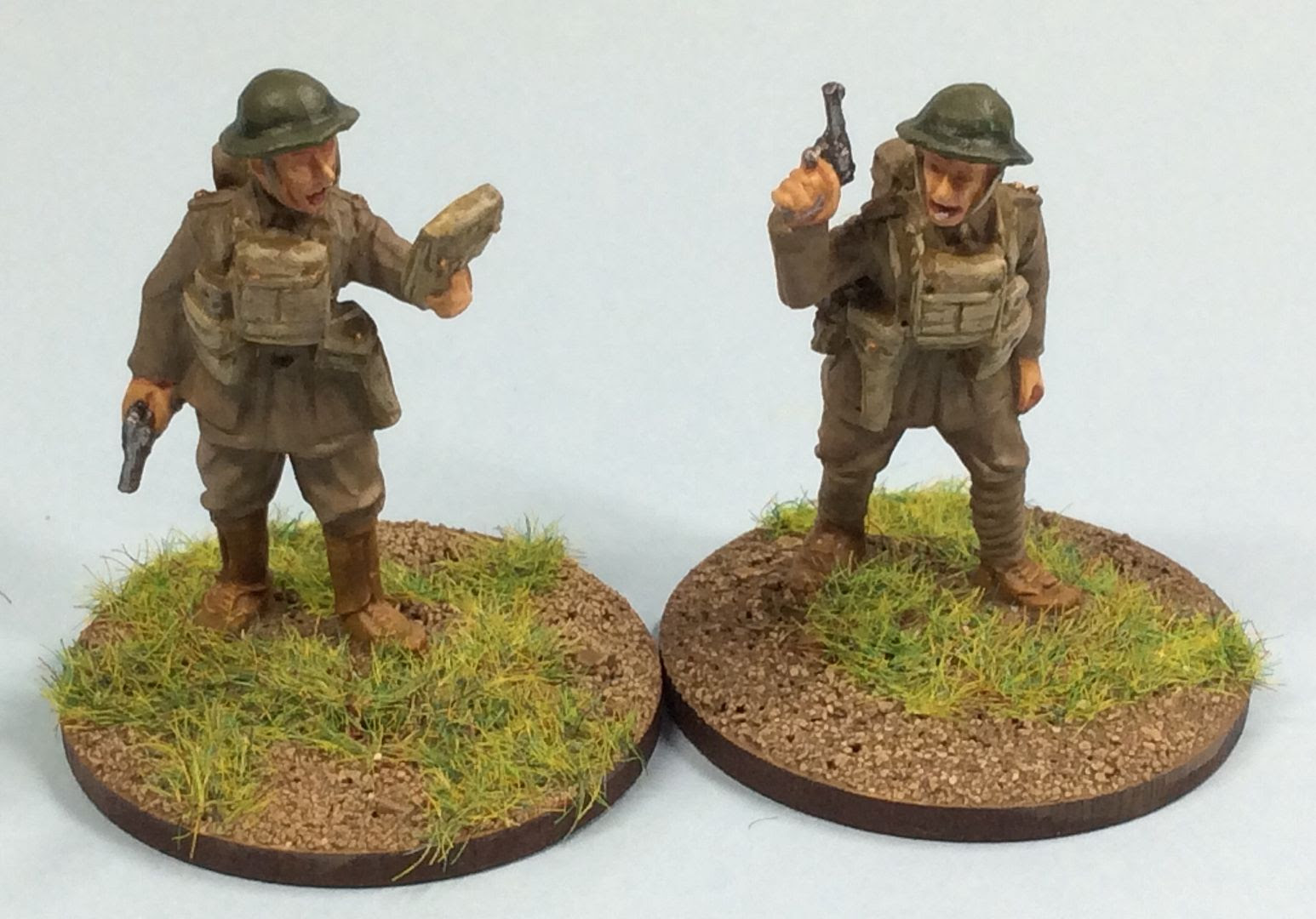 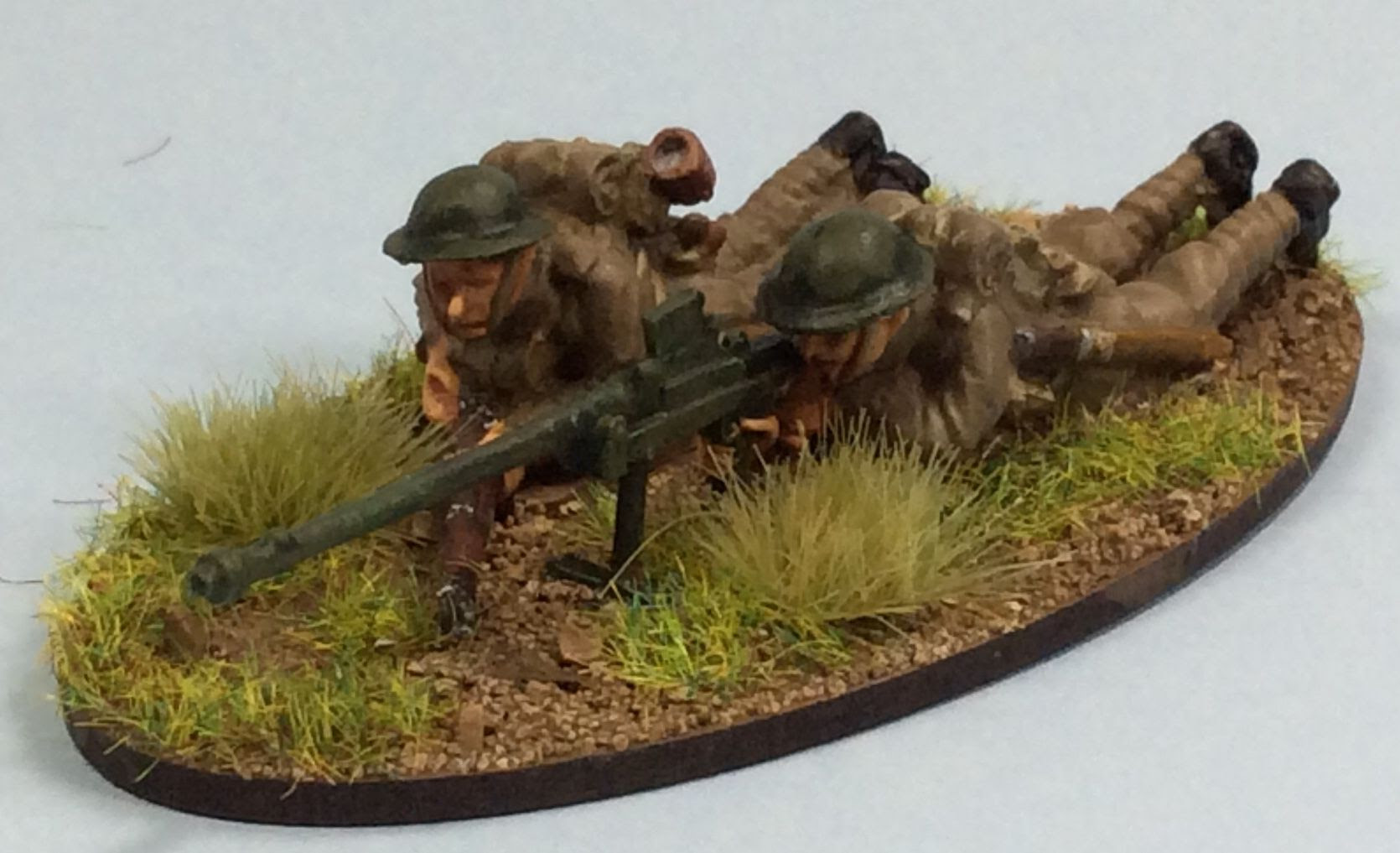 Next, the Partizan free figure from the May show, even though I didn’t attend due to the recovery phase of my hip replacement operation Lawrence kindly sent me the figure. Here he is, Captain Bicclesworth RFC ~ 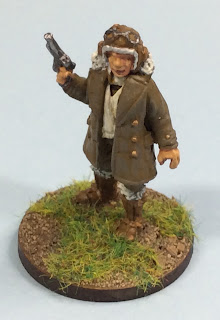 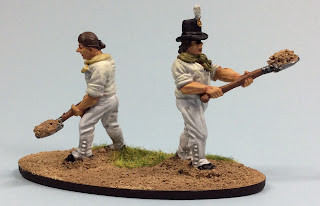 Finally two old sets of figures rebased along with other ephemeral pats of my SYW collections: French infantry in camp and British Infantry drinking and whoring. Both sets are from Wargames Foundry, though the French vignette sees the addition of an Irregular Miniatures roasting spit and fire and a seated figure from another civilian set, the British set has the camp fire added from the French set as I used the table elsewhere~ 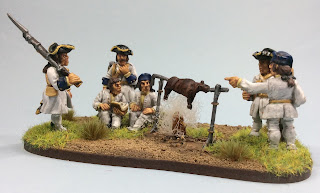 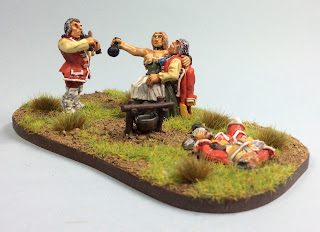 I've started work now on my Warlord/ ProGloria Landsknecht pike block, the first figures I bought for our Italian Wars project as it happens! I have already finished the mounted Command figure and started the two standard bearers, so I hope to have something to show in mid July. On Sunday I hope to go to Penkridge Table Top Sale, so I may add to the Lead Pimple! If not then, then perhaps at Barrage in Stafford the following Sunday? 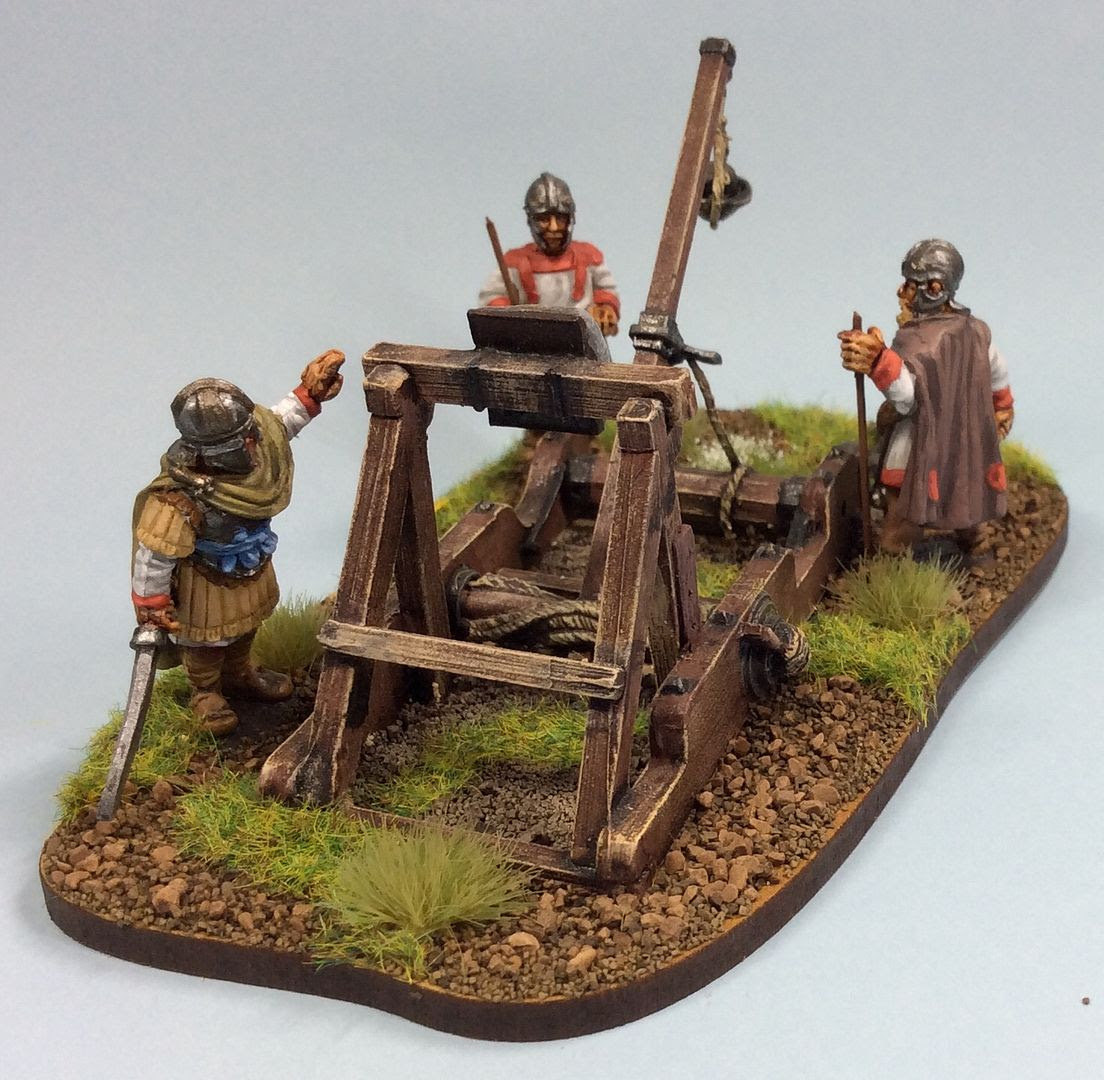 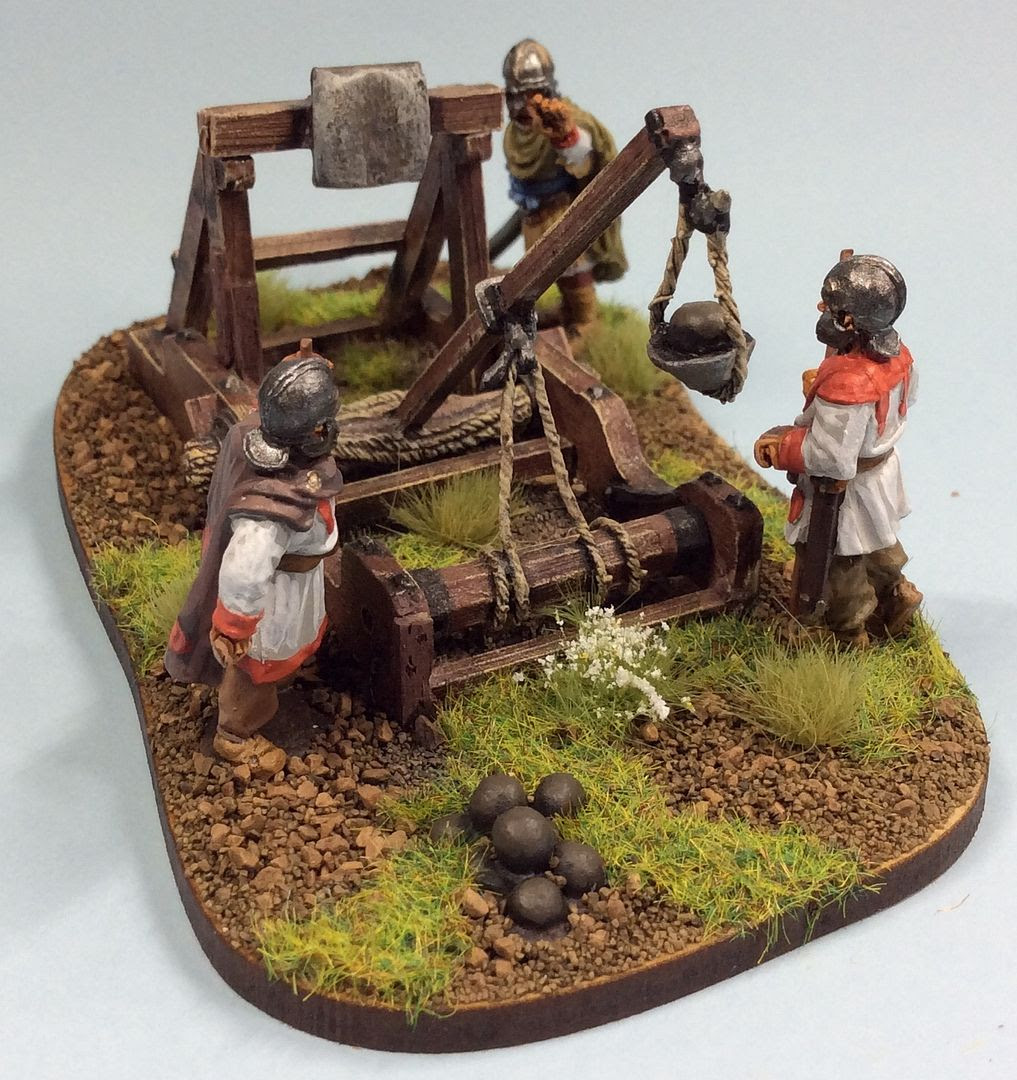 I removed the sword from one figure and lowered the arm slightly with gentle bending. Some brass rod fitted the other hand to stand in for the operating lever. The second figure needed no alteration, just the addition of the brass rod lever. The third figure needed no adjustments at all. Nothing to it really, but a nice addition to the collection for the next game, later this year no doubt.
On the painting desk now are four Mutton Chop 1938-40 British figures, two officers and a two man Boys AT Rifle team. Alongside them are two Trent Miniatures Artificiers. I’m also rebasing the Foundry SYW dismounted French Hussars and Dragoons along with their British dismounted Dragoon opponents. Time though now to sort out the table layout in GHQ for the Wargames Illustrated photoshoot.
Posted by David at 09:18 14 comments:

As part of my break from our Italian Wars project I have added a further artillery piece model and gun crew to my 1914 BEF force. The gun is a resin kit which was included in a large bag of figures Matt passed to me last year. The gun itself is manufactured by  T.A.Miniatures http://taminiatures.com/shop/  The crew are from Wargames Foundry's WWI 1914 British range, sculpted by Dave Andrews, and so compatible in all ways save heft with his later Great War Miniatures which comprise the bulk of my BEF ~ 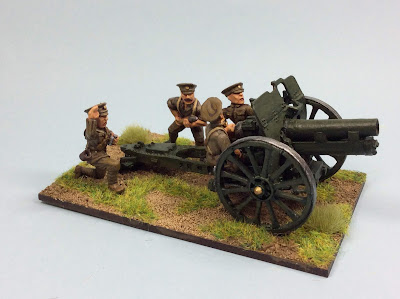 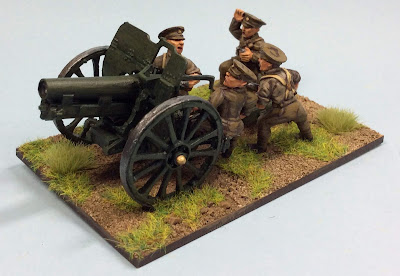 They have been completed just in time to join the rest of my and Phil's collections for Dan's visit for a Wargames Illustrated photoshoot to illustrate a piece I've written for the magazine on adapting Black Powder rules to the 1914 phase of the Great War.
On the painting desk now are three modified Foundry Late Romans to be the crew for a stone thrower which was part of a gift from my long time chum and modeller Ian Bottrill. So, back to painting it is!

Time for a larger game in GHQ and what better than a run out for my SYW collection? A fictional game centred on the struggle for the strategically important town of Hipstadt between the British and the French. The objective is to control the town by the end of turn 10 ,a very taxing game both size and time wise for me at least! I hope the pictures will, as ever, convey the sense of the action without burdening the reader with unnecessary cut and thrust detail ~


As ever here in GHQ we used Black Powder for the rules finding them to our taste, although we have added a Rally From Route phase, largely as our table is only 6' x 6'6" and we have smaller armies in consequence than the creators of the rules have in their games. The routed unit is moves 12/18" to its rear and is allowed a chance to Rally at a -2. If it passes then it Rallies on the spot, if it fails then it Routes another 18" and is allowed a second chance to Rally at -1. If it fails a second time then it is dispersed. Of course, if it is contacted in either Rout by the enemy it is destroyed! It works for us, but may not be to the taste of others; that's always the way with wargamers and rules I've found!
Next week's Monday game here in GHQ will be on a Wednesday! You'll see why when you pop back next week!
Posted by David at 03:06 14 comments:

I've given the Italian Wars project a bit of a rest for the present, largely because the last two units I have to paint are Landsknechts! Instead I'm choosing to work on small additions to existing projects. First up are four unreleased figures from Trent Miniatures which I've chosen to depict as the Salm-Kirberg Hussars, a French loyalist unit in British pay during the Flanders Campaign of 1793-95. In Black Powder terms they will be a Small Unit in our games, one of several colourful such ones I've already recruited ~ 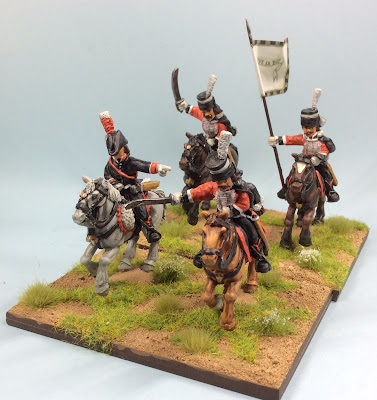 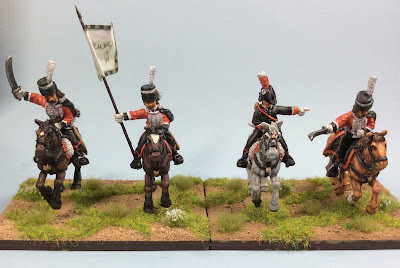 The sources, both visual and written, which I've found do not entirely agree as to small details like sash colours and plumes, but I chose largely to follow the Knotel plate, though I did take a few minor liberties in execution! 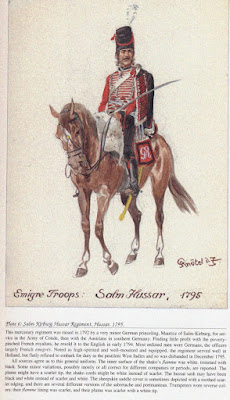 As Phil might say, "They will do!" At least they will for me, if not anyone else. Next on the painting desk is a WWI 4.5" howitzer and crew. I hope to finish that this week, although with shorter painting sessions and therapeutic walking it may take a bit longer!
Posted by David at 00:48 16 comments:

Or more properly The Glorious Death of Pompus Maximus, late Emperor. This week’s game here in GHQ saw a Late Roman game in our ongoing tale of Pompus Maximus and Baldinus and their struggle for the Imperial throne sometime in the late C4th. As usual we played out the game using our in house version of Neil Thomas’s Ancient and Medieval rules. The game swung this way and that, as they generally do with these rules we find, before a decisive moment ended the contest. A few pictures to convey the sense of the game. Next week, hopefully, a SYW game using Black Powder ~

For the second week on the trot Phil kindly agreed to come over to GHQ so we could have a game as I continue my rehabilitation by getting back into normal activities as much as I can. I suggested combining our completed Italian Wars bases and trying out Neil Thomas’s Renaissance rules to see what changes we might like to make. We managed to make armies of thirteen units a side by combining our bases. Each side had an objective to seize in addition to trying to destroy the enemy army. The Florentines had to seize the farm in the Papal deployment area, while the Papal army had to seize the bridge over the Po in the Florentine deployment zone. The pictures will I hope capture the colour and drama of the unfolding action in a battle which went right down to the wire ~

The game lasted about three hours, punctuated by lunch, and demonstrated to our satisfaction that Neil Thomas's Renaissance rules would suit us well, although we already have made the first adjustments and additions to the basics. The colour and spectacle of the armies on the tabletop battlefield have inspired us to press on with the project. Next week though we plan a return to the C5th struggle for the Roman Empire between Pompus Maximus and Baldinus.
Posted by David at 09:46 28 comments: 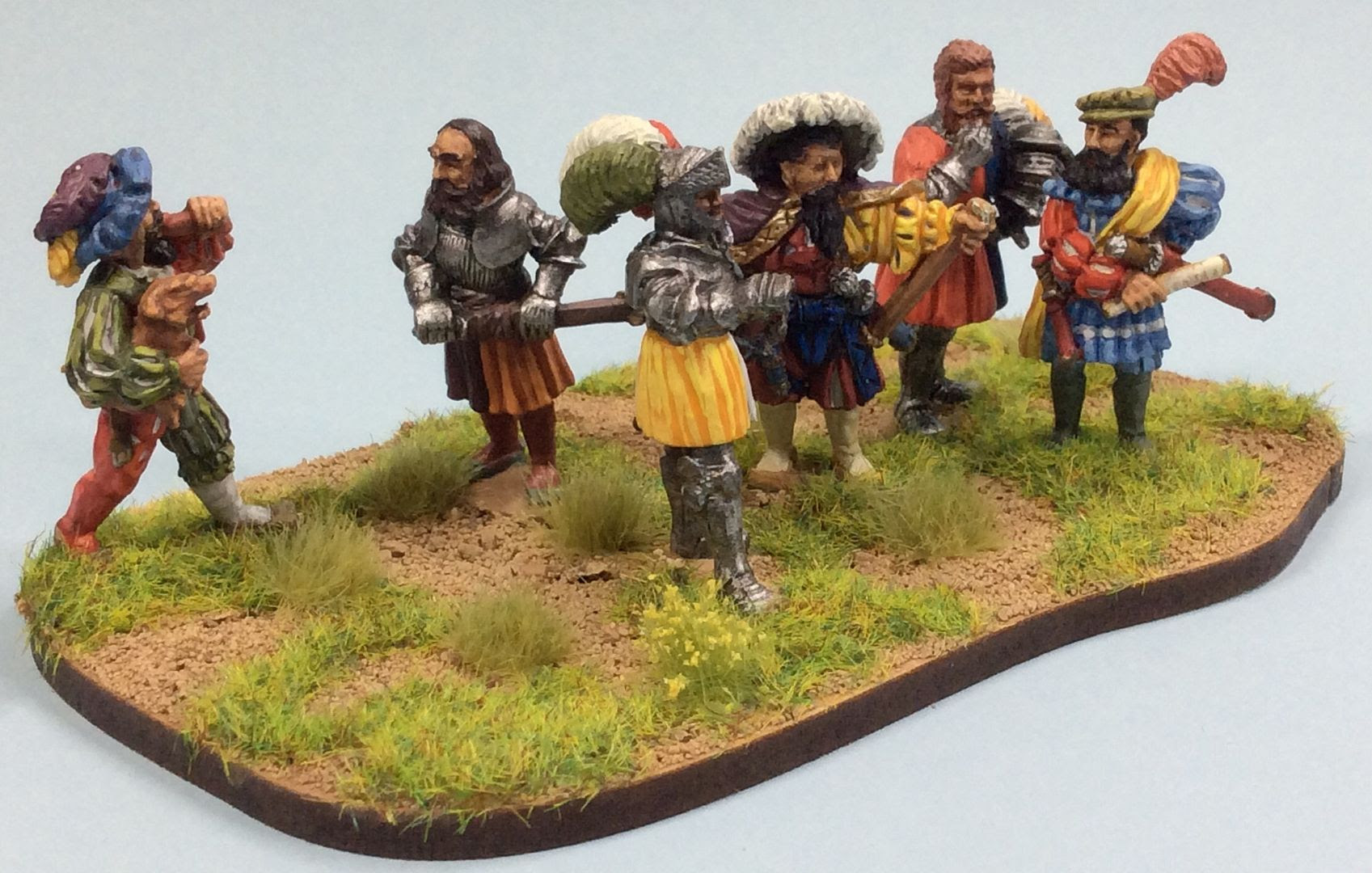 I’m taking a break now from the Italian Wars project and have located two small pieces for other projects: a 4.5” Howitzer and crew which will do for both the Great War and the VBCW; four Hussars by Matt for Trent Miniatures, the Salm-Kirkerg Hussars. That should take about two weeks at my current pace.
Posted by David at 02:51 12 comments: