On The Road To Manderlay...

...well, no flying fishes playing I’m afraid, nor is dawn coming up like thunder from Rangoon across the bay, just Phil and I playing our latest Monday game here in GHQ: a WWII game set in Burma 1943 game using Bolt Action 2 to give my Imperial Japanese and British Commonwealth force’s a bit of an airing. The sharpest amongst you may notice that the terrain looks oddly familiar. I’ll tell you why later, but you’ll wish you hadn’t asked. Meanwhile, on with the game which sees the Commonweath forces trying to oust the Japanese from a defensive position guarding a strategic river bridge ~

The game ended in an inconclusive draw after nine turns as we ran out of time! The Japanese were hanging on grimly to their positions around the bridge while the Commonwealth forces would need a further two or three turns to see if they could wrest control away from the Emperor ‘s sons. That's it from GHQ now as far as games go until after my hip replacement operation and the inevitable convalescence, though I shall hope to continue to post from time to time.

As you may have seen in an earlier post I started work on a base of crossbow armed infantry from my TAG Papal States Starter Army. As the figures come in both firing and advancing poses I’ve been able to make up two bases by the addition of some figures from various command packs. I wanted to have the firing figures sheltering behind their pavise and the advancing ones carrying theirs on their backs, so I ordered a set of pavise from Perry Miniatures. When they arrived I looked around for suitable transfers for my Papal States’ figures to utilise. Nothing I found was suitable to buy so I started looking for period designs I might use as inspiration for painting my own. I found several really lovely examples, all way beyond my meagre skills with the brush, even if I simplified the design. In fact the designs I’ve chosen come from details on the wonderful Pete’s Flags which I’ve used for inspiration. I understand the pavise in the plastic sets are flat, but the metal ones are in 3D which really stretched my painting skills... Anyway, here are the finished base of figures for you to see for yourself and make up your own mind ~ 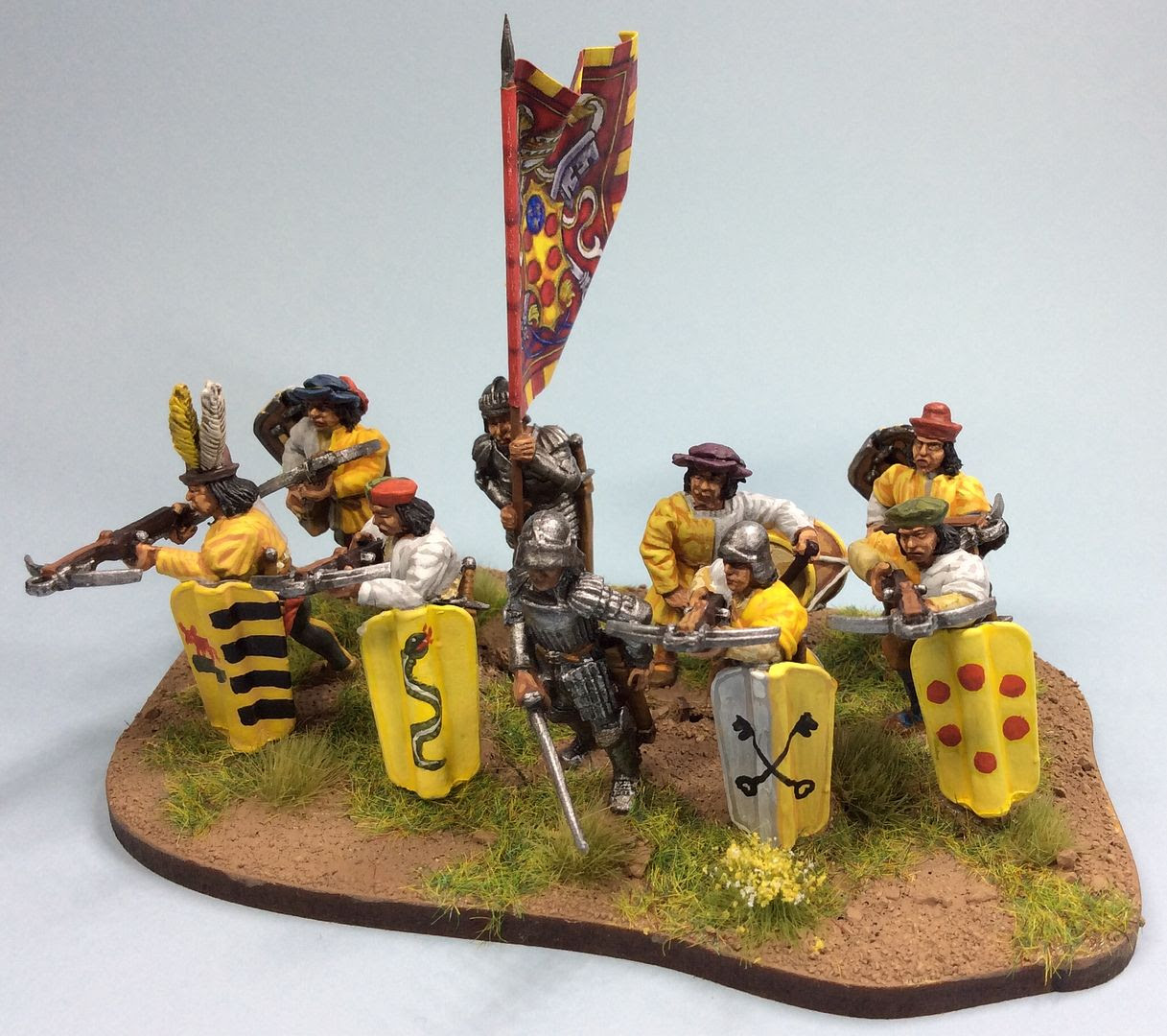 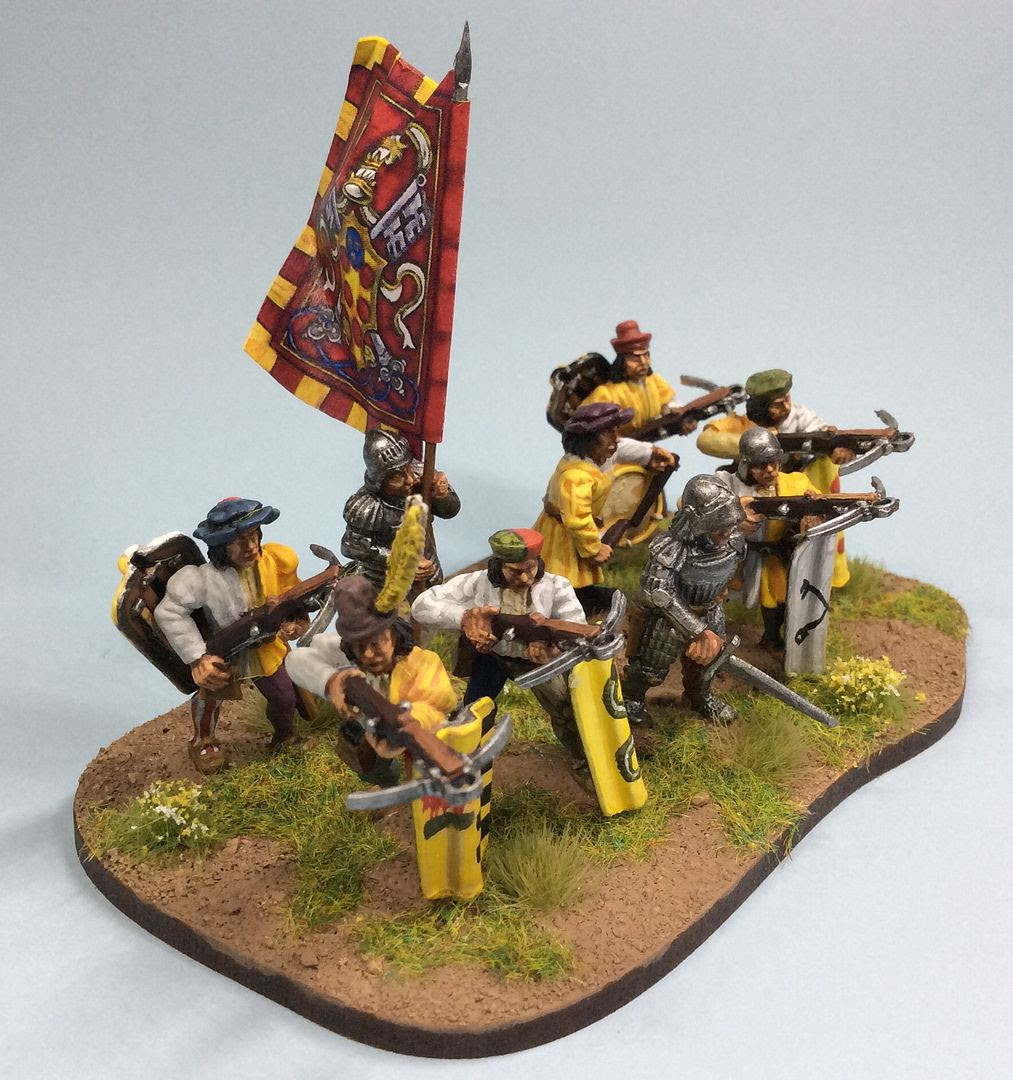 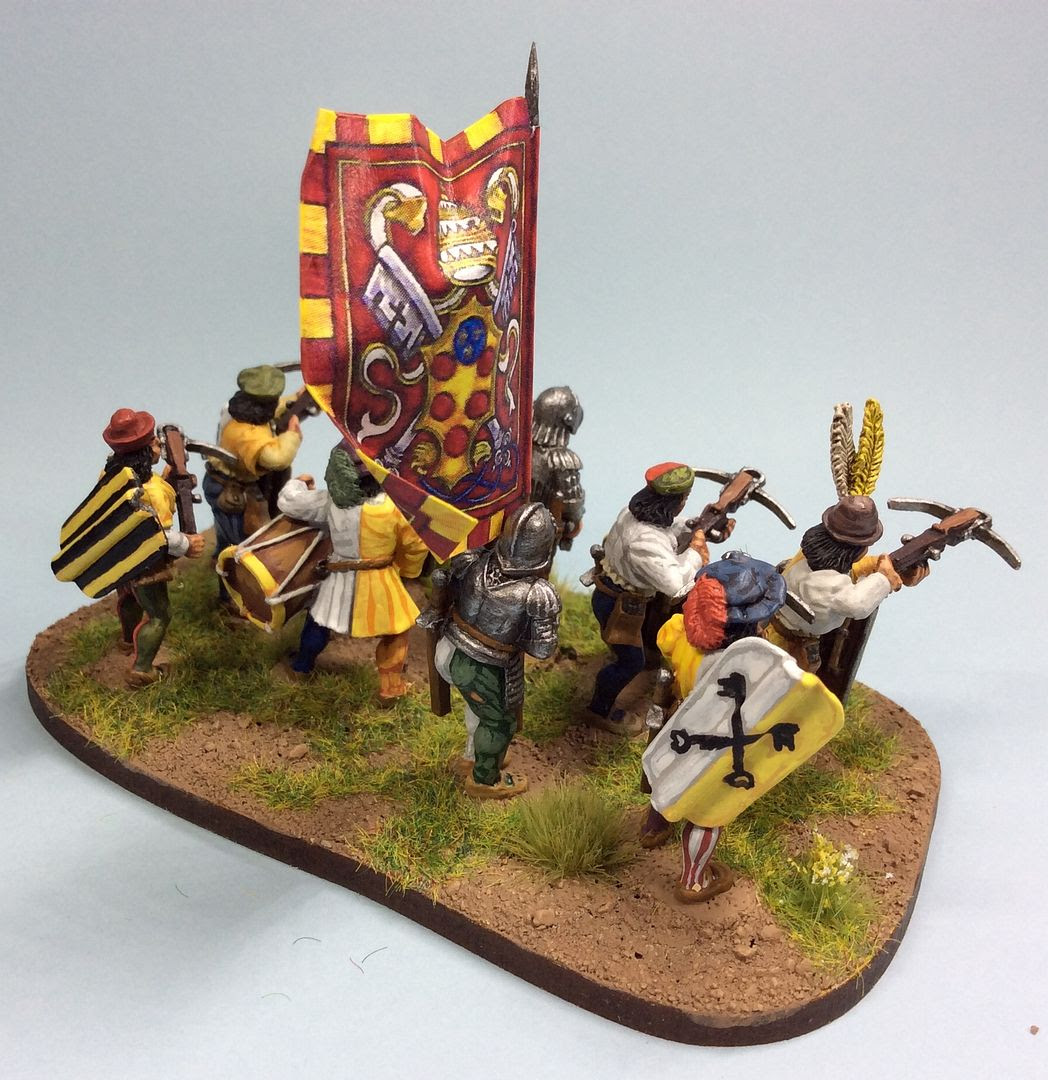 I’ve started now on the Pontifical Guard, again taking my inspiration from Robby Roddis’ rendition of the unit on his Borgias blog (See link in earlier post). If I can finish those then next up will be a vignette style base for a light gun. We will have to wait and see where we go. Meanwhile, here’s the first of the Pontifical Guard to pique your interest ~

Now it’s off to Burma in 1943 for a Bolt Action 2 WWII game with Phil, unless he’s snowed in of course in Darkest Rawnsley...

The latest additions to my Italian Wars collection is a base of mounted crossbowmen. They were received from TAG as part of my initial order for the Papal States Starter Army. There are two packs in the catalogue for the Italians, one firing and one standing at ease. I got the former in my package. Now I’ll state right off that both the horses and figures are decent sculpts and nicely cast. There was little cleaning up required and the separate crossbows fitted the figures reasonably comfortably. The problem is in the pose when you come to base the figures as the men are sitting firing to the right of the horse meaning either the horse looks forward and the men are firing to the right or the horses are places parallel to the base front to facilitate forward fire, but look strange when on the move, rather like equine crabs! It would have been nice to have them posed firing forward really from a game aesthetic point of view. Judge for yourself anyway ~ 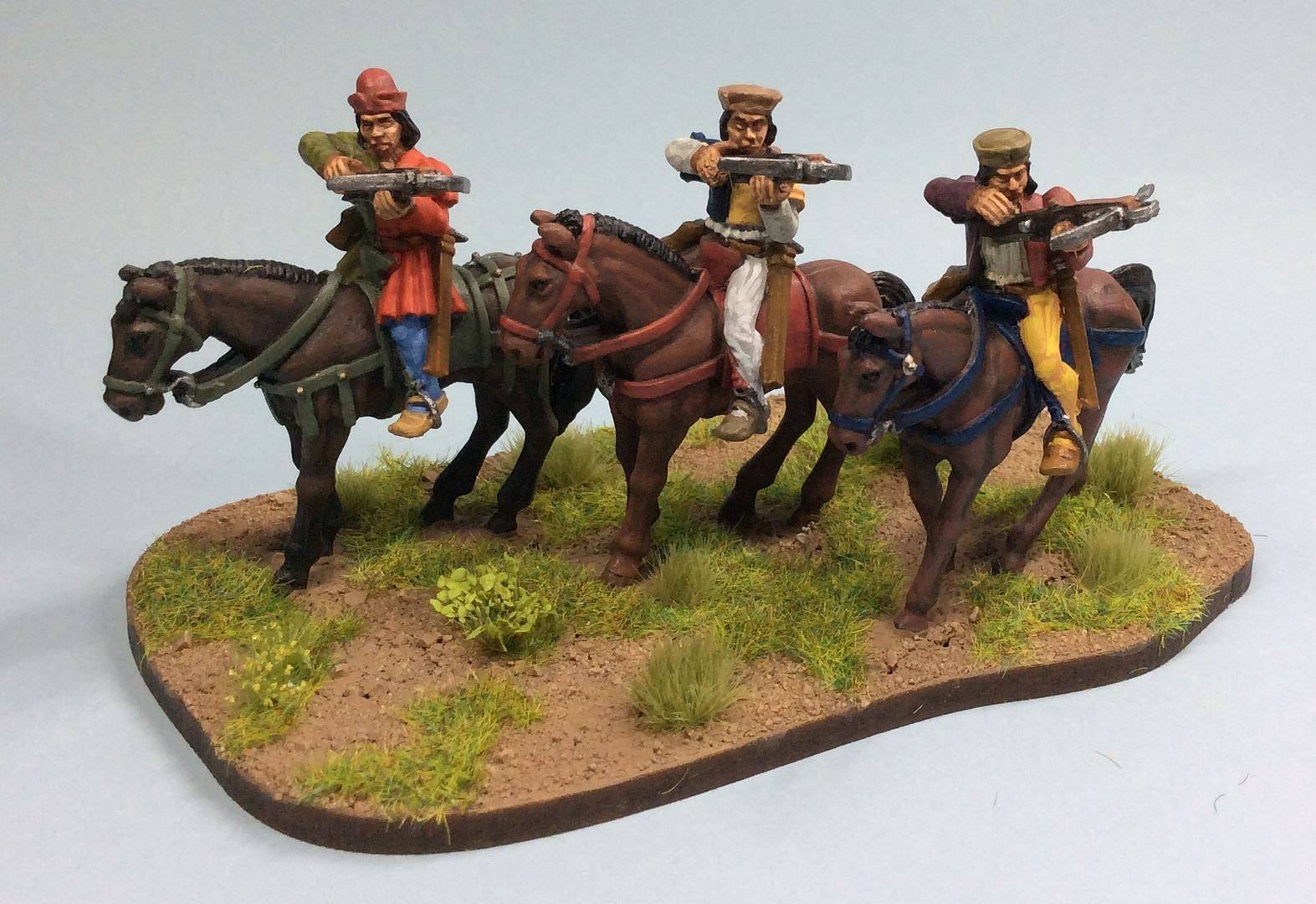 In the initial order I also received two free female figures. Freebies always welcome and nothing wrong with female figures either, but one woman with a basket and four Perry Miniatures clerics are my total civilian population in future games right now. The second free figure I’ve assigned to my gun vignette as she looks suitable in pose to add variety to the look of the base. There doesn’t appear to be a civilian pack or two yet in the TAG catalogue. Are any planned I wonder? Here she is anyway ~ 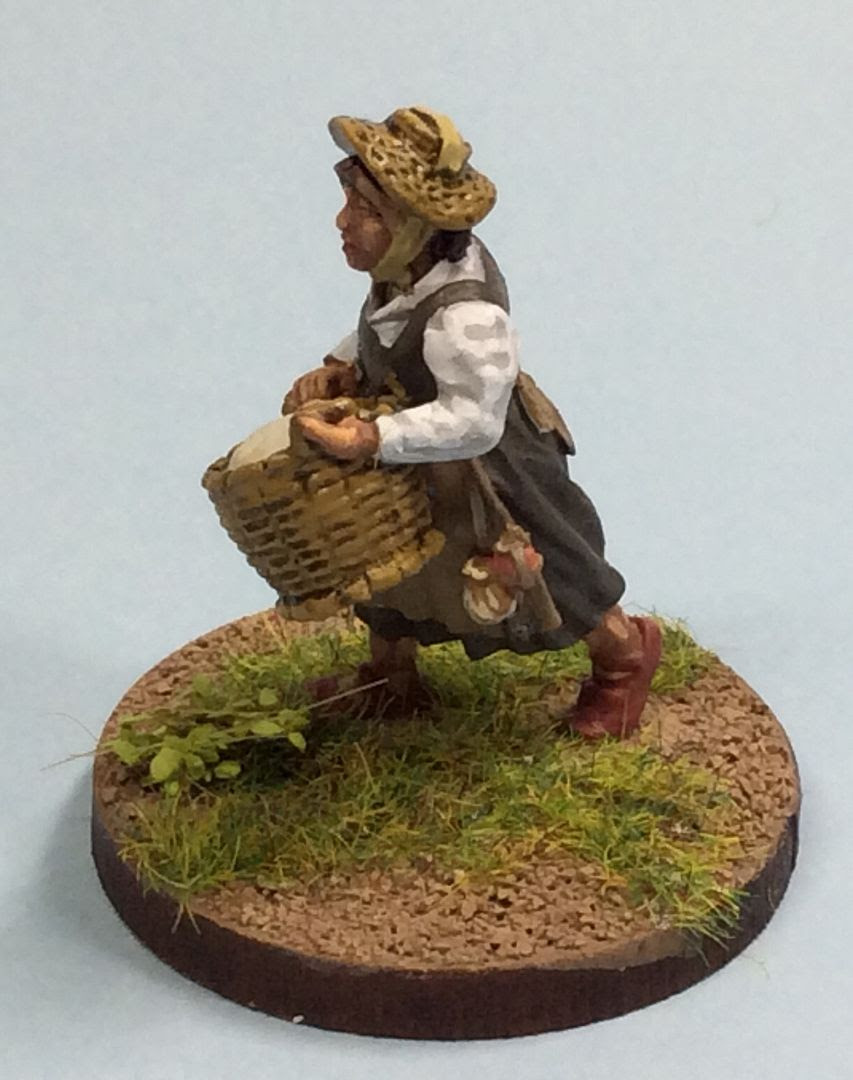 While I’m having these thoughts on figure poses and choices, it would be nice if there were
Command figures for the non armoured types such as my Mounted Crossbow unit or indeed the Foot Crossbows I’m painting now. Bases look odd to me with full and three quarter plate armoured figures on bases of essentially unarmoured figures like those. Here’s a photo of the base in question as a work in progress which I hope makes my point ~ 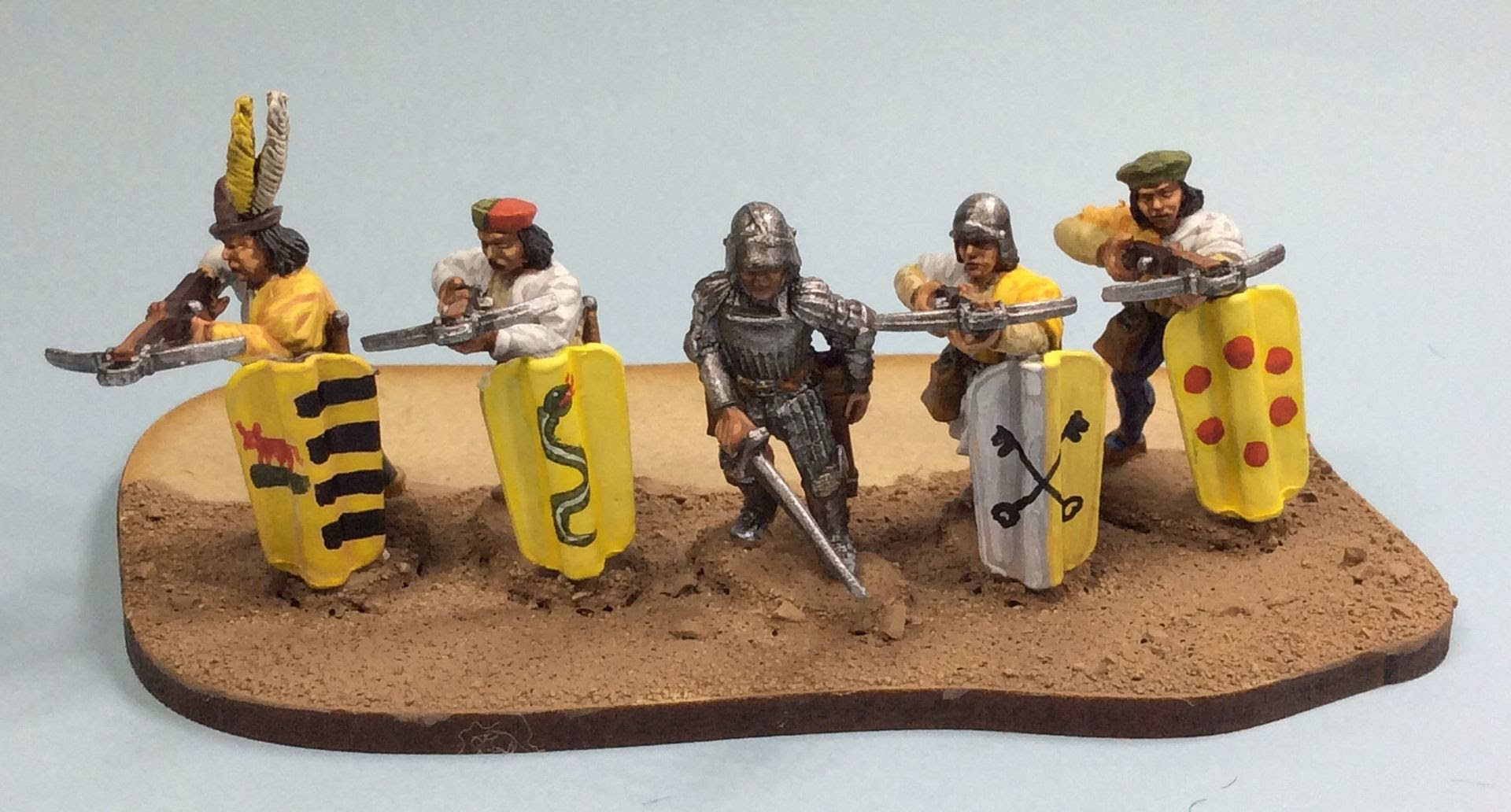 I got my letter from the Hospital yesterday confirming my Date with Destiny for the 10th March at 7.30 a.m. No going back now as they say. I wonder how many more figures I can finish before I’m made even more bionic? Could I be on course to become Britain’s £6.00 Man I wonder...? Well, austerity and all that...
Posted by David at 00:17 15 comments:

I have completed my first unit of Italian pikemen for my Italian Wars project. They are figures from TAG, all lovely sculpts and very easy to paint with such clear details and sharp casting. They are inspired by Robbie Roddis’s own rendition of the unit, which you can see over on his blog ~
http://wargamingtheborgias.blogspot.co.uk/
You’ll need to locate the post in question from the side bar of Popular Posts, clue: it has the same title as my post here!
The flags are from Pete’s Flags via eBay and represent great value for money. There are a fair number to choose from I found for my army, you can’t have too many really in this project in my view. Many may be conjectural and no doubt some button counters will need a safe space, but these are toys in a game, no more, no less, so they will do nicely for me. Next up a base of mounted crossbowmen followed by a base of foot crossbowmen. If time permits before 10 Match and my Date with Destiny I shall try to do a base of Papal Guard. We shall see ~ 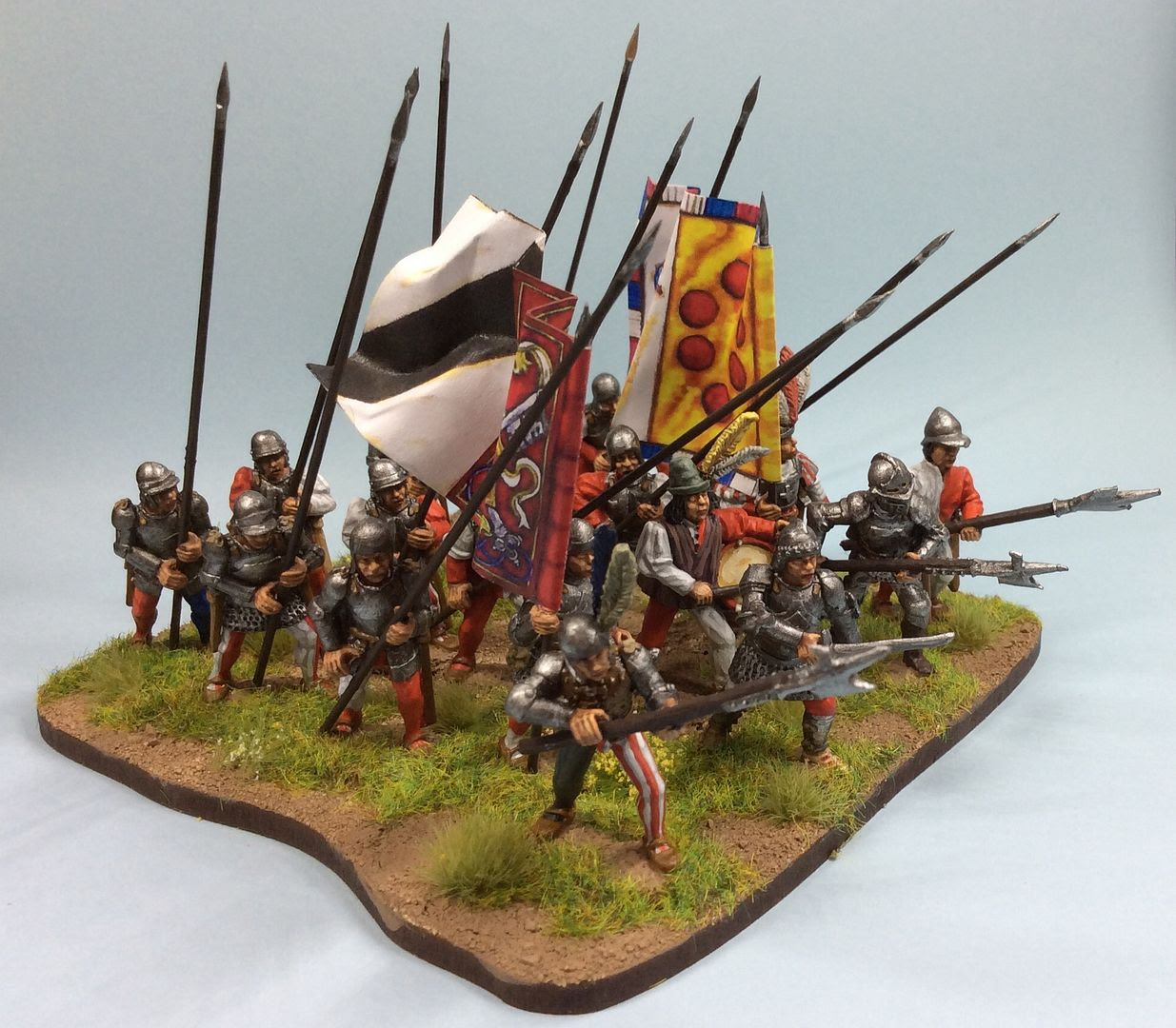 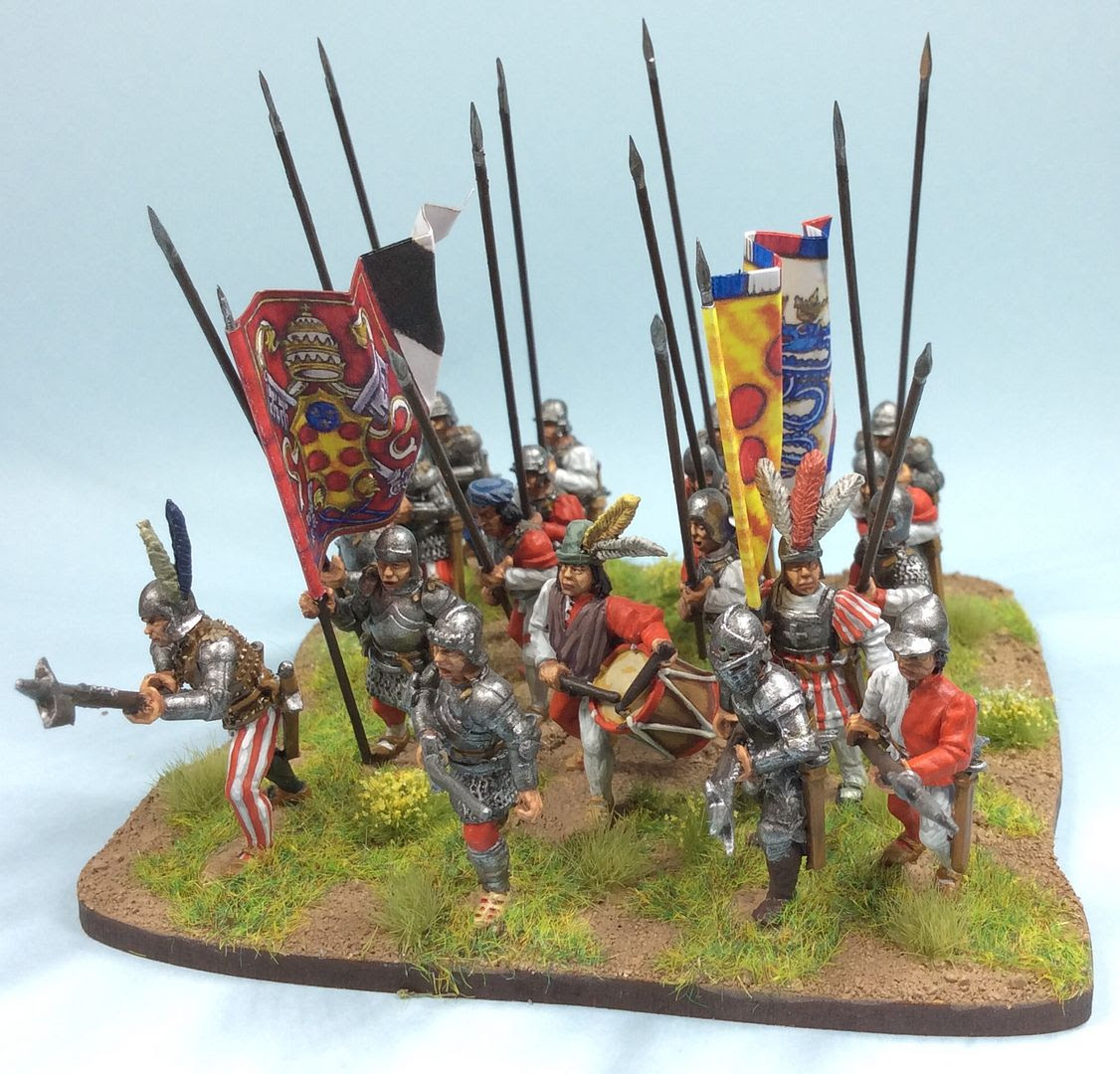 Progress on my Italian Wars project

I have made steady progress with my part of the joint project and now have eight bases of figures completed towards my Papal States army. They will ultimately be mainly TAG figures, supported by Warlord/ProGloria, Foundry, Front Rank and Casting Room. I'm working on my first pike block now and hope to comlpete that next week ~

Before anyone asks, we shall use a mash up of Neil Thomas' Ancient & Medieval and Pike & Shot rules with our own additions as the forces develop. I doubt we will have a big enough force to play Pike & Shotte, but you never know...
Posted by David at 05:46 16 comments:

Jon and I managed a game on Wednesday evening last week as GHQ was once more accessible as the garden makeover wound down on the construction front. We decided on a Black Powder game set during the Indian Mutiny. Jon commanded the HEIC & Imperial forces and I took the Mutineers. The HEIC/Imperial objective was to carry the bridge and drive off the Mutineers defending the crossing, while the Mutineers hoped to defeat the enemy decisively. A selection of photos I took after the game will, I hope, give a flavour of the action which played out ~


Our game was somewhat blighted by very poor Command Roll dice, not to mention the Firing Die at all! Unusually for us we only played six turns when the game clearly drifted out into a draw. Still a good evening but an unresolved action in the end. The Mutineers defended stubbornly and the HEIC/Imperial attacks stalled repeatedly. Neither sides' fire was devastating and as to Hand to Hand, the less said the better!

The 23rd Foot in the AWI

Along with various Italian Wars figures last month I painted five bases of figures for my AWI collection, to represent the 23rd Foot in our games. Now, before the button counters and lace freaks crawl out the woodwork I know they wore soft hats not Fusilier caps, but I wanted a different look for the unit. I used Foundry miniatures for the unit as I really prefer the style and finished product to the more recent Perry Miniatures. I’ve got three figures for the Lights to finish off next week, but for now here are the completed bases ~ 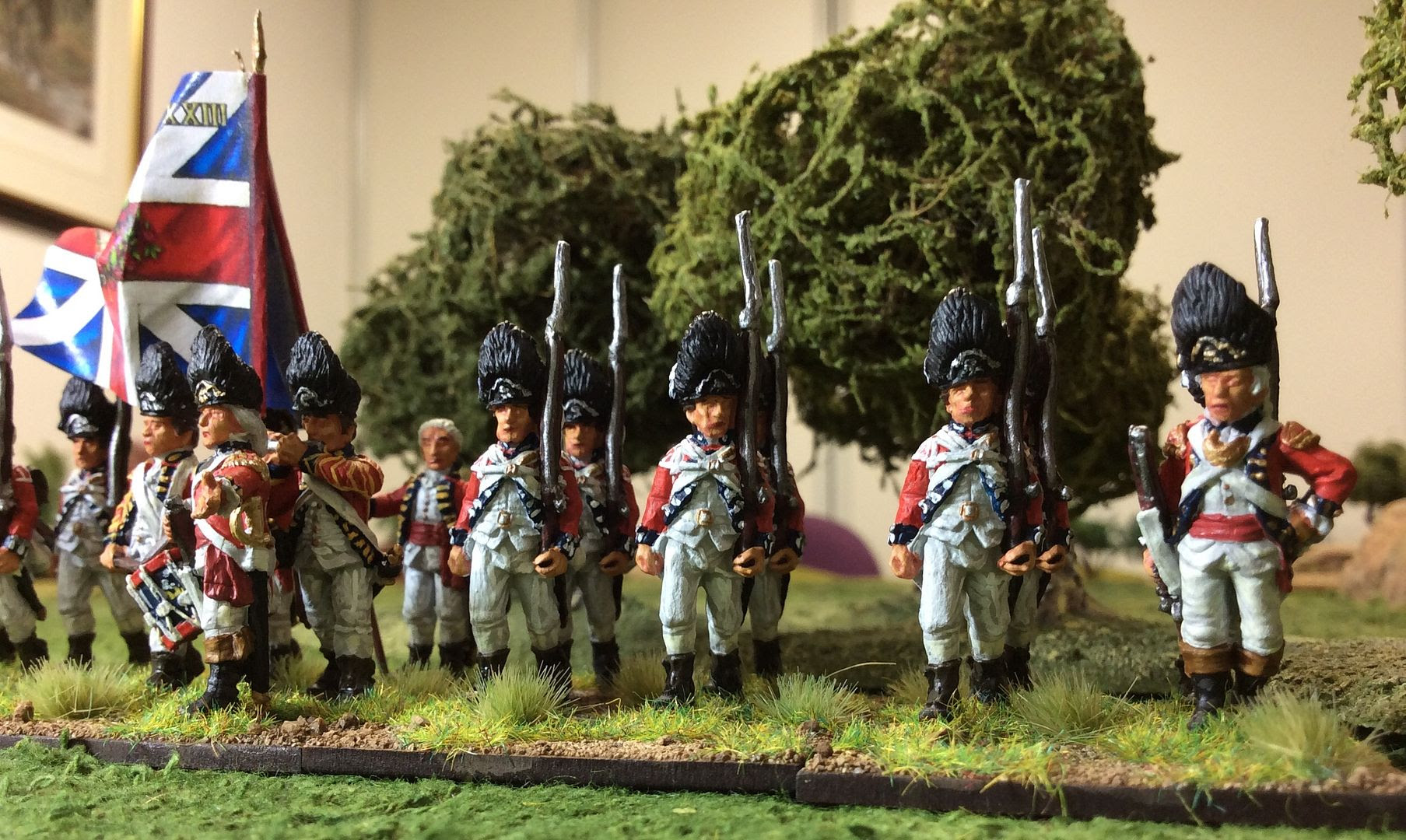 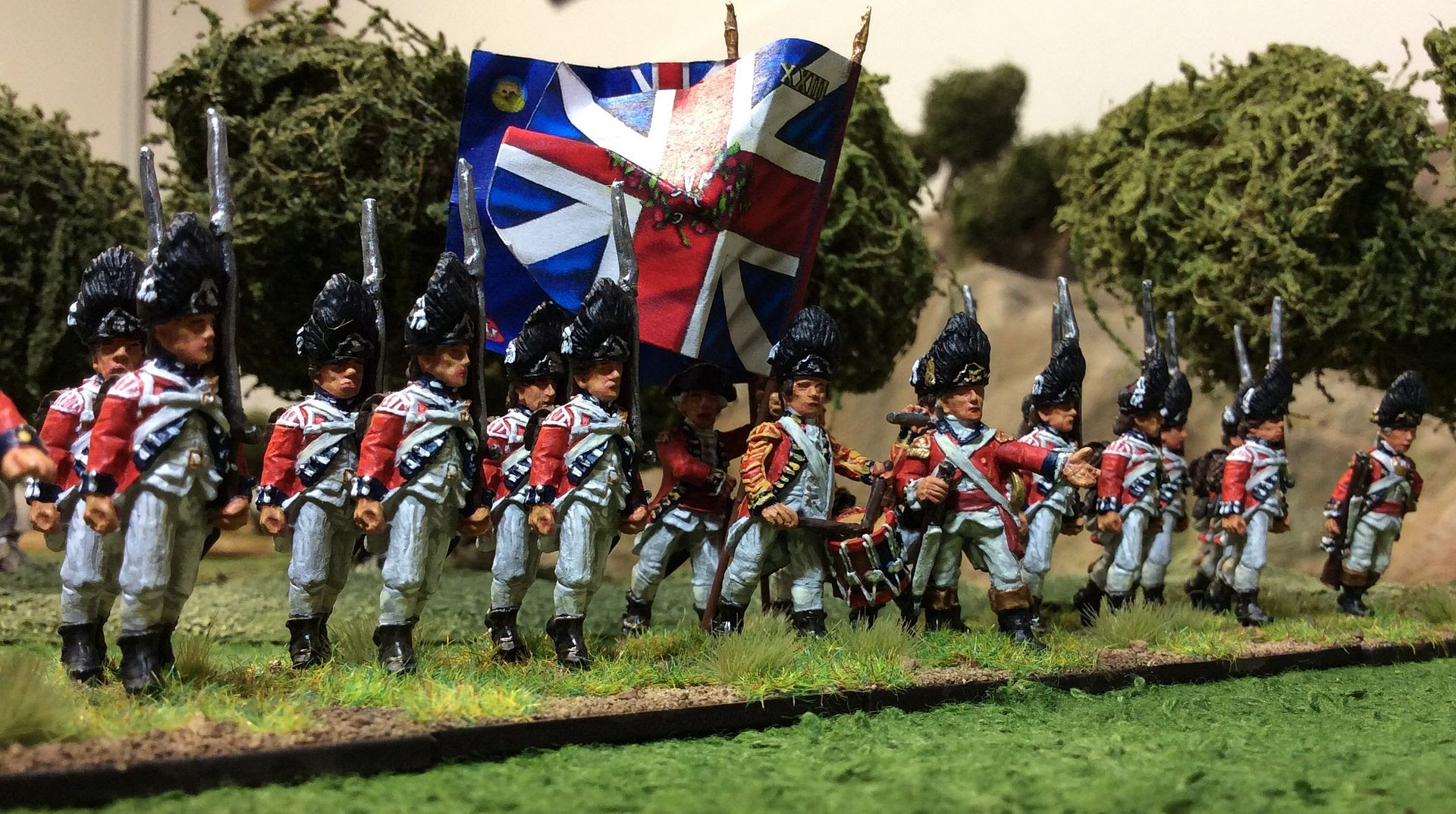 As you can see, I’ve not covered myself in glory with my painting of these, but they look fine on the tabletop battlefield, so for me”They will do!” I’m making good progress with the Lights’ base, in amongst my Italian Wars project, with just the Officer figure to finish off. I’ve two more British and two more Continental Infantry Regiments to work on over the year, so for those interested in my AWI efforts there will be more later. Probably a bit later...
Posted by David at 03:39 12 comments:

Sometimes I amaze myself with my own stupidity. Phil and I were scheduled to play an Indian Mutiny game here in GHQ on Monday, a day which just happened to coincide with Day 1 of our garden makeover - delayed by a week due to pre Christmas snows pushing prior jobs into our time slot. I’d laid out the terrain yesterday, but intended to lay out the figures before Phil arrived today. Silly Boy! I couldn’t get into GHQ when the time came, piles of earth, the old patio stones stacked and broken pots, not to mention a jungle of plants, all bared the way! Never mind, we enjoyed a fine burger for lunch courtesy of Sue and a good natter about our Italian Wars project, not to mention putting the hobby at large to rights. So, no game report and pictures today, instead a look at my progress on the painting table recently ~

All for the new Italian Wars project with Phil of course. I'm working on the two mounted clerics now and the first Elmetti for the second base of four figures. As the bases arrived from Warbases I've got the rest of my TAG figures either undercoated or ready to spray on the undercoat. Everything has been knocked back by the garden makeover work and my inability to get in GHQ before tonight!
On a personal note I saw my consultant today and as a result I will be admitted for a total right hip replacement on 10 March. Obviously the blog will be quiet for a bit after that. in the meantime, back to the brushes!
Posted by David at 11:44 18 comments: